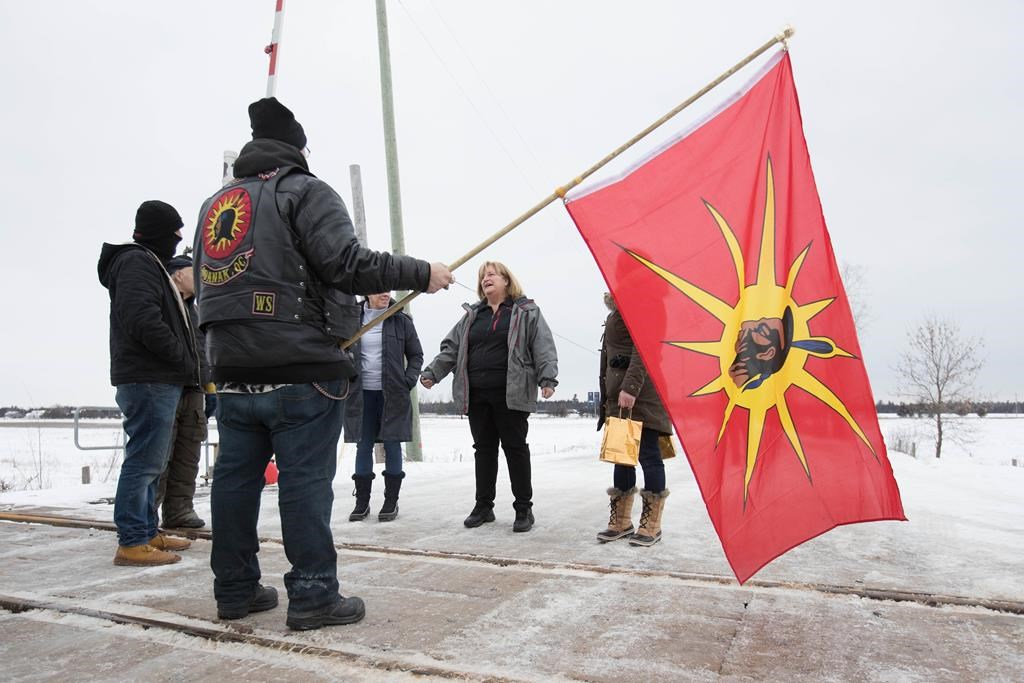 OPP Sgt. Diana Hampson of the liaison team, middle, speaks with members of the Mohawk Territory in Tyendinaga Mohawk Territory, near Belleville, Ont., on Tuesday, Feb. 11, 2020. Photo by The Canadian Press/Lars Hagberg
Previous story
Next story

Canada's rail system was under stress Tuesday as Via Rail cancelled passenger service on key routes and Canadian National Railway Co. warned it will be forced to close "significant" parts of its freight network unless blockades impeding its lines are removed.

Via Rail cancelled service on its Montreal-Toronto and Toronto-Ottawa routes because of a blockade near Belleville, Ont., in support of opponents of the Coastal GasLink pipeline project that crosses the traditional territory of the Wet'suwet'en First Nation in northwestern B.C.

"Although we remain hopeful that a resolution will be reached, in view of the current uncertainty, VIA Rail is cancelling all departures until Thursday end of day on the Montreal-Toronto and Toronto-Ottawa routes, in both directions," Via spokeswoman Marie-Anna Murat said in an email.

A blockade near New Hazelton, B.C., means normal rail activities are also being interrupted between Prince Rupert and Prince George, she said.

Via Rail's announcement followed the warning from CN, which has halted more than 150 freight trains since Thursday evening, when demonstrators set up the blockades in B.C. and Ontario.

The Montreal-based railway said Monday that long-distance freight shipments in Central and Eastern Canada were already at a virtual standstill.

Chief executive JJ Ruest stressed the limited parking space in its network, with traffic backed up from Halifax to Windsor, Ont., and in parts of B.C. approaching Prince Rupert.

"CN will have no choice but to temporarily discontinue service in key corridors unless the blockades come to an end," he said in a statement Tuesday.

"The impact is also being felt beyond Canada's borders and is harming the country's reputation as a stable and viable supply chain partner."

The ongoing blockades are near Belleville, Ont., and New Hazleton in B.C.'s northern interior, while demonstrations cropped up Tuesday in locations ranging from the Halifax port to the B.C. legislature.

The Canadian Chamber of Commerce called on all levels of government and police to work together to bring an immediate end to the blockades and to restore all rail service.

"From propane to grain and food and consumer items, Canada's supply chains are being severely damaged by the continuing interruptions to Canada's rail services by protesters," the chamber said on Twitter.

"The rail system affects the entire Canadian economy and Canadians everywhere, including people trying to get to and from work. They must be allowed to continue to serve the thousands of businesses that depend on them."

Industry groups expressed concern about the shutdown as shipments to and from the U.S. and China are delayed or cancelled.

"It's a real crisis," said Joel Neuheimer, head of international trade with the Forest Products Association of Canada.

Wood, pulp and paper producers have lost tens of millions of dollars so far, he said.

"We ship massive amounts of pulp to the United States and to places like Asia, so big negative impacts there," Neuheimer said in a phone interview.

"We have members whose customers aren't placing orders right now in the U.S. because they know that it's not going to get there as soon as it needs to get there."

Olin Corp., a Missouri-based chemical maker with a facility near Trois-Rivieres, Que., cautioned Ottawa that its tight distribution schedule means the 50-odd Canadian companies it serves will soon stop receiving chlorine — used in part to treat drinking water — which it says is only shipped by rail.

"Olin is alarmed by the current freight rail situation in Canada, and we are concerned that customers and municipalities will not receive shipments of vital chemicals including chlorine within one week," chairman and CEO John Fischer said in a letter to federal Transport Minister Marc Garneau on Tuesday.

The Canadian Manufacturers and Exporters Association, whose members typically load about 4,500 rail cars a day, is urging government officials to work with police to restore service on the tracks.

"In Canada there's not really other alternatives to move stuff around. The highways and trucks — especially in Quebec and southern Ontario — are already at a very, very high utilization of available capacity," association president Dennis Darby said in a phone interview.

Stakeholders from chemical companies to Dannon Yogurt called this week to raise concerns, he said. "They can't get their stuff out."

Garneau said he is working with the railways and his Ontario counterpart Caroline Mulroney to find a solution, and that blockage of tracks is "dangerous and illegal."

Despite the countrywide impact, he underscored that responsibility for enforcing court injunctions against the anti-pipeline protesters lies with provincial politicians and police.

"Obviously we hope it's going to be resolved, but it is up to the provinces to make those injunctions effective by taking action," Garneau told reporters in Calgary. "It's having an important impact on the economy of the country."

Earlier Tuesday, Via Rail said 157 passenger trains have also been cancelled, affecting 24,500 travellers on its Montreal-Toronto, Ottawa-Toronto and Kingston-Toronto routes.

Ontario Provincial Police said officers are in talks with protesters behind a blockade that sits metres from the tracks, though not across them.

OPP spokesman Bill Dickson said an officer of the court read an injunction to the protesters Tuesday morning ordering them to abandon the blockade, which bisects Tyendinaga Mohawk Territory, about 20 kilometres east of Belleville.

While CN obtained the injunction on Friday, Tuesday marked the first time it was read aloud in accordance with court procedure, Dickson said.

Mohawks of the Bay of Quinte Chief R. Donald Maracle expressed solidarity with the Wet'suwet'en community in northwestern B.C. and called out actions by the RCMP, which has been enforcing a court injunction on the First Nation's traditional territory and arresting those attempting to block access to the pipeline route.

"We call on both federal and provincial governments to demand the RCMP immediately reconsider how it addresses peaceful protests and demonstrations, and allow the opportunity for sound discussion with a common sense approach to achieve peaceful outcomes," Maracle said in a statement.

Brendan Marshall, head of economic and northern affairs at the Mining Association of Canada, said buyers of natural resource products were as vulnerable as producers — some of whom are already curtailing production.

"If you're a facility that's reliant on rail service in order to get your product to a site, then it's kind of like sand through the hourglass — when it runs out, the plant can't work anymore," he said.

This report by the Canadian Press was first published Feb. 11, 2020.

— With files from Michelle McQuigge

Companies in this story: (TSX:CNR)

this is how the ripple effect

this is how the ripple effect of the IDEA demonstrated by Extinction Rebellion is blossoming into direct action on climate and first nations justice. Canada is waking up to the corporate con job and right wing propaganda we've been swimming in for too long. I am SO encouraged by the uprising coast to coast to coast