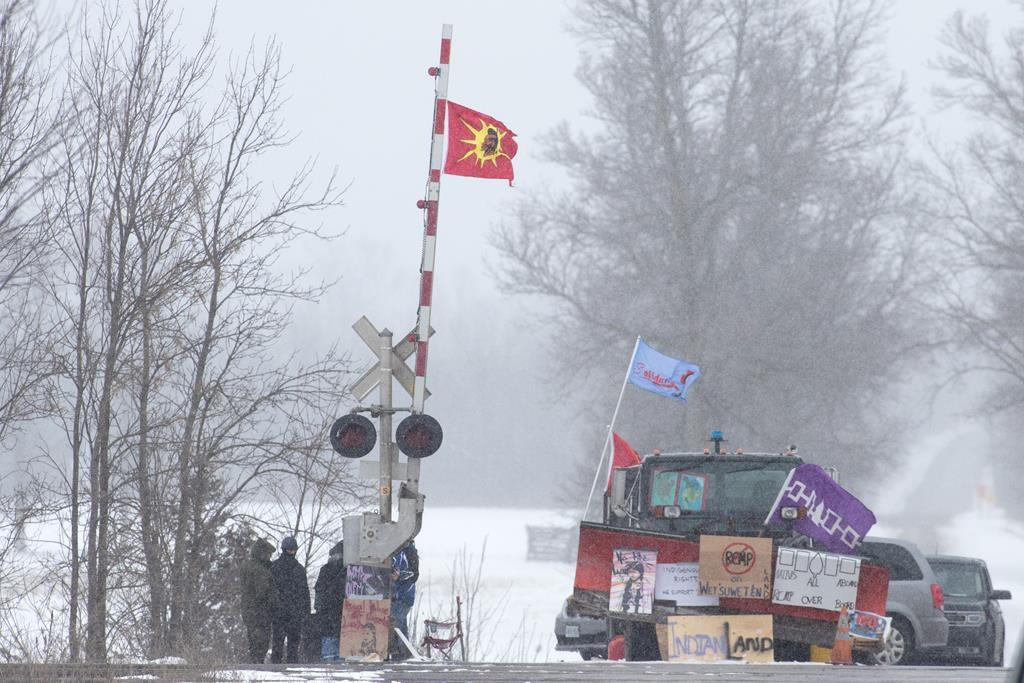 Protesters stand on the closed train tracks during a rail blockade in Tyendinaga Mohawk Territory, Ont. on Feb.13, 2020, in solidarity with the Wet'suwet'en hereditary chiefs opposed to the LNG pipeline in northern B.C. Photo by The Canadian Press
Previous story
Next story

Ontario's Indigenous affairs minister said Thursday his federal counterpart must act quickly to resolve a rail blockade that has halted train traffic on a key provincial rail line for nearly a week.

Greg Rickford said he has asked federal Indigenous Services Minister Marc Miller to meet with activists near Belleville, Ont., who are protesting against a pipeline project in northern British Columbia.

The province wants a peaceful resolution to the situation and is hopeful Miller can help bring it about more quickly, Rickford said.

"I've urged him to get to that community at the earliest possible time. I would prefer today," the provincial minister said.

Miller's office did not immediately respond to a request for comment on Thursday. But in a letter earlier this week, he offered to meet with Indigenous leaders at a location of their choosing on Saturday.

"My request, that I ask you kindly to consider, is to discontinue the protest and barricade of the train tracks as soon as practicable. As you well know, this is a highly volatile situation and the safety of all involved is of the utmost importance to me,'' Miller said in the email posted publicly Thursday.

"I hope you will agree to this request and that we can meet in the spirit of peace and co-operation that should guide our relationship."

One of the three recipients, Tyendinaga Mohawk Chief Donald Maracle, said he expects the meeting will take place but he can't comment on Miller's request to end the blockade because the protest wasn't initiated by its council.

"We're happy that he's agreed to come," Maracle said. "We need to allow the discussion to take place."

Blockade organizers across Canada have said they're acting in solidarity with those opposed to a pipeline project that crosses the traditional territory of the Wet'suwet'en First Nation near Houston, B.C. The blockades have forced Canadian National Railway Co. to shut down its entire network in Eastern Canada and Via Rail to cancel passenger service across the country.

Rickford said he has spoken with Miller and urged him to address the concerns of activists that are within the jurisdiction of the federal government.

He stressed that the province is hopeful the blockade near Belleville, Ont., will remain peaceful.

"We certainly want to make it clear we're not interested in any kind of confrontation," Rickford said. "We believe, and we're hopeful, that that will occur if the federal government steps into the space that is being requested of them."

This report by The Canadian Press was first published Feb. 13, 2020.