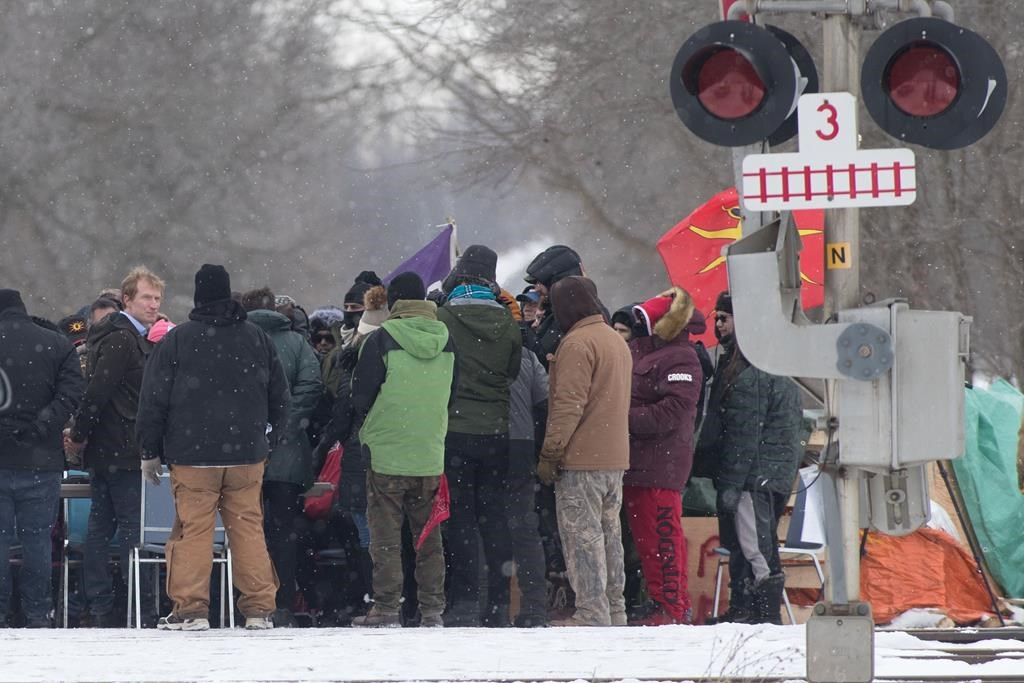 Indigenous Services Minister Marc Miller looks back during a meeting with protesters at a rail blockade on the tenth day of demonstration in Tyendinaga, near Belleville, Ont., Saturday, Feb. 15, 2020. Photo by The Canadian Press/Lars Hagberg
Previous story

Hours of talks between the federal government and representatives of the Mohawk First Nation ended with "modest progress" Saturday evening, Indigenous Services Minister Marc Miller said as he left the meeting near a rail blockade that's shut down train service across much of Eastern Canada.

But Miller declined to tell reporters what that progress was, saying he would deliver that message to Prime Minister Justin Trudeau directly.

"Tonight, we made some modest progress by opening up a dialogue with the people standing out there in the cold and doing so for eight or nine days," he said. "We talked openly, frankly, painfully at times, and sometimes with humour. There's a lot more work to be done."

The focus, Miller said, was firmly on the natural gas pipeline that crosses Wet'suwet'en territory in northern British Columbia and is opposed by their hereditary chiefs.

He said there are steps the federal government needs to take to resolve the blockade on Tyendinaga Mohawk territory near Belleville, Ont., which was in its 10th day on Saturday.

"They aren't easy, no one said they were," he said. "The underlying issues did not arrive yesterday, they've been present in this community for hundreds of years."

Miller requested the meeting to "polish the silver covenant chain," which the Mohawks say refers to one of the original agreements between the First Nation and the Crown.

Similar blockades across the country have cut both passenger and freight rail services, with pressure mounting on the federal government to end them.

On Saturday, people milled in and out of the camps by the railway to deliver toilet paper and snacks at the Tyendinaga blockade, while a pizza restaurant delivered free pies to the demonstrators.

As he arrived in Tyendinaga some nine hours before his meetings would end, Miller said the blockades have been divisive.

"All of Canada is hurting," he added. "The economy is slowing down. Everyone knows the reports about supply shortages, but we can't move forward without dialogue."

CN obtained a court injunction to end the demonstration on Feb. 7, but the Ontario Provincial Police have not enforced it.

The company also announced it had obtained fresh injunctions to stop three new blockades established on its network on Saturday — two in Vaughan, Ont., and one in Vancouver.

"In Vaughan, protesters put their personal safety at risk by climbing on and between railcars ... Trespassing on railway property and tampering with railway equipment is not only illegal, but also exceedingly dangerous," JJ Ruest, CN's president and CEO, said in a written statement.

An injunction in B.C. was enforced earlier this month by the RCMP to give Coastal GasLink access to a work site for the pipeline, which is part of a $40-billion LNG Canada export project in Kitimat. More than two dozen protesters have been arrested for refusing to obey it.

Coastal GasLink has signed agreements with all 20 elected band councils along the pipeline route. However, Wet'suwet'en hereditary chiefs assert title to a vast 22,000-square-kilometre area and say band councils only have authority over reserve lands.

Alberta Premier Jason Kenney maintained his criticism of the protests.

A growing number of business leaders and industry groups called for government or police intervention in the shutdowns.

Trudeau rejected a suggestion from federal Conservative Leader Andrew Scheer to have the public safety minister use his authority under the RCMP Act to end what he called the "illegal blockades." The prime minister said the dispute must be resolved through dialogue, while acknowledging the blockades have caused disruption for travellers and businesses.

This report by The Canadian Press was first published Feb. 15, 2020.

Could it be that Scheer has

Could it be that Scheer has "suddenly" heard, behind his tantrum, a faint murmur growing in depth and breadth and volume of those awakened as they leave his headed-for-disaster ship? Awakened? You bet! Then, one employs one's intelligence and integrity and determination to get on with enjoying Life and assisting in the creation of a positive future of equality and abundance for all. I be aboard no ship o' fools! Not I!