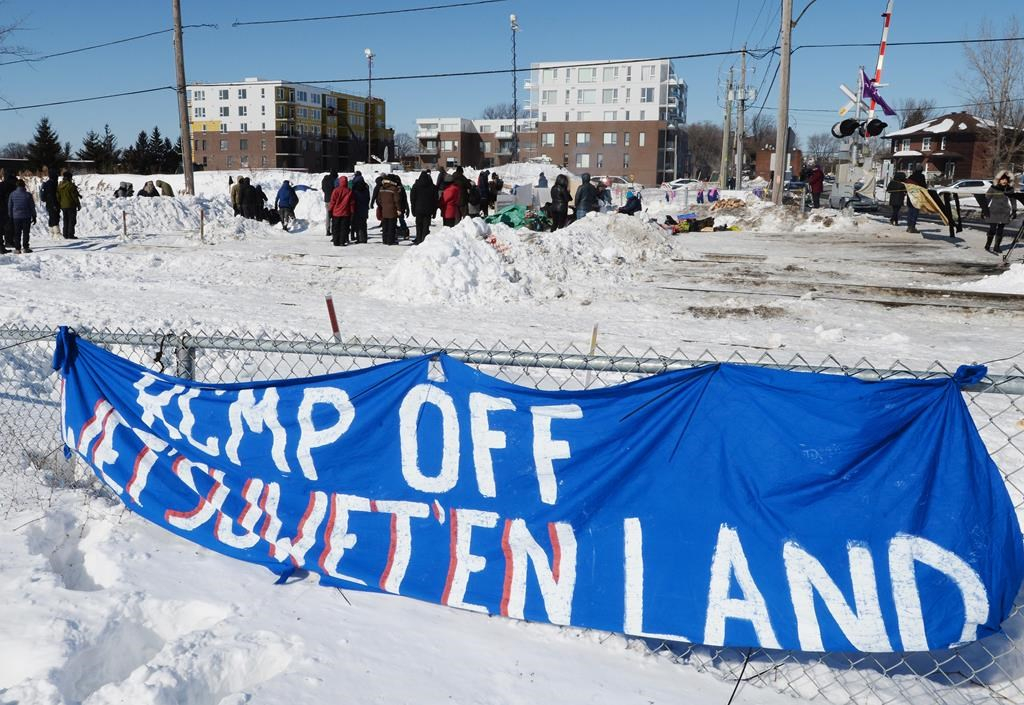 People protest at a rail blockade in St-Lambert, south of Montreal, Que. on February 20, 2020 in solidarity with the Wet'suwet'en hereditary chiefs opposed to the LNG pipeline in northern British Columbia. Photo by The Canadian Press/Ryan Remiorz
Previous story
Next story

Quebec Premier Francois Legault says police will dismantle a rail blockade in St-Lambert, south of Montreal, if a court grants an injunction.

Legault told reporters that because the blockade is not on First Nations territory, it is easier for the government to take action.

"There is an injunction that has been requested," Legault said. "As soon as we obtain it we will dismantle (the blockade). It's on Quebec territory, it's not on the territory of a First Nations."

The blockade in solidarity with Wet'suwet'en hereditary chiefs in British Columbia was erected on CN tracks, and has disrupted rail service for suburban commuters and travellers between Montreal and Quebec City.

At the site on Thursday, a few dozen protesters — well stocked with supplies, tents, camping gear and firewood — said they plan to stay put as long as RCMP remain on Wet'suwet'en lands.

Also on Thursday, the RCMP confirmed the commander of the Mounties' British Columbia division has sent a letter to the Wet'suwet'en hereditary chiefs, agreeing to discuss the future of a small contingent of officers stationed on their traditional territory.

Federal Public Safety Minister Bill Blair earlier said the RCMP has offered to move officers away from the area where the traditional leaders of the Wet'suwet'en First Nation have been opposing a pipeline on their territory.

It St-Lambert, protesters — who declined to give their names to reporters — described themselves as supporters of the Wet'suwet'en and said they will take their direction from the community's hereditary chiefs.

"We will stay until the RCMP leaves Wet'suwet'en territory and the hereditary chiefs are satisfied that conditions have been met," said one member of the protest group, who didn't give his name.

"The blockade is in solidarity with others in Canada and we'll follow the orders of the hereditary chiefs. If they are satisfied, we have no further reason to stay," the man said.

Snow was piled onto tracks, with signs strung across a cord hung between rail signals.

Quebec Premier Francois Legault says police will dismantle a rail blockade in St-Lambert, south of Montreal, if a court grants an injunction.

In addition to the St-Lambert blockade, railway tracks have also been blocked on the Mohawk territory of Kahnawake, south of Montreal. Legault said the rail blockade on Mohawk territory is more difficult to dismantle because the area has its own police force.

"It's a First Nation territory, so yes, there is a difference," the premier said.