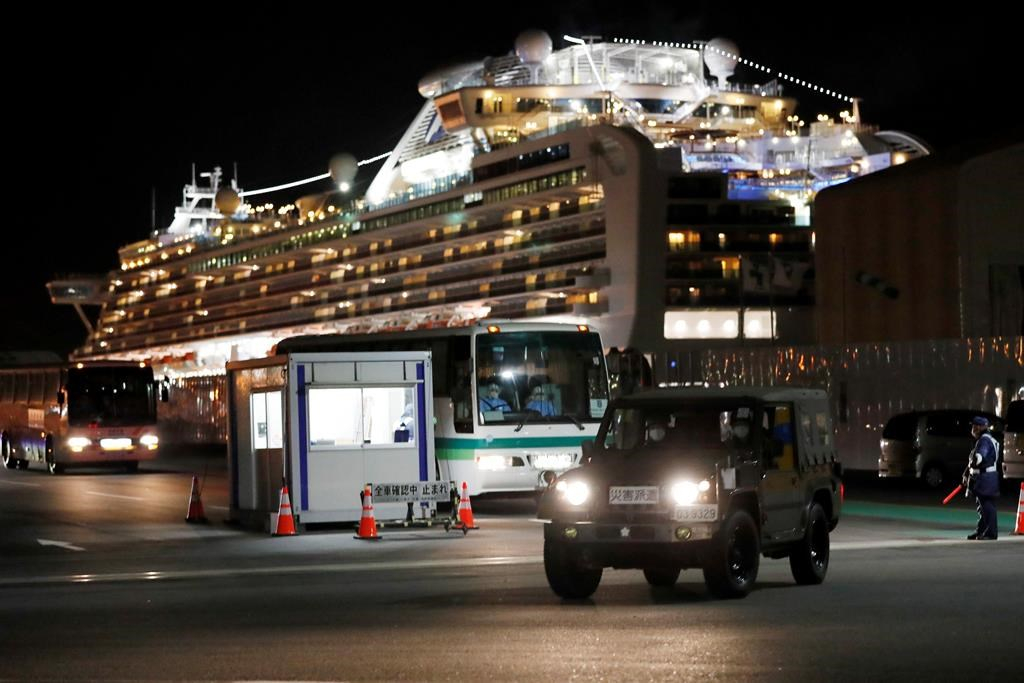 Healthy Canadians from the Diamond Princess cruise ship will shortly be heading home, according to Canada's foreign affairs minister, after weeks under quarantine for the novel coronavirus, or COVID-19.

The ship, docked in Yokohama, Japan, has seen the largest outbreak of the virus outside China, with 634 passengers having tested positive at last count.

Among the infected are 47 Canadians who will have to remain in Japan for treatment.

The passengers will each be issued a face mask and coloured wrist band before they are ushered off the ship to the Haneda Airport, according to a letter from government officials to the evacuees on board the ship.

Those who are cleared to travel will be taken to Canadian Forces Base Trenton for further screening before they are placed under another two-week quarantine at the Nav Centre in Cornwall, Ont.

Health Minister Patty Hajdu said there was a chance that those who tested negative for the virus and show no signs of symptoms may be released from quarantine early under the discretion of Canada's top public-health doctor.

The evacuation comes just after Japanese officials broke the news that two passengers from the ship died after contracting the virus.

The two people who died, a man and a woman in their 80s who are both Japanese, were believed to have been infected before the quarantine began on the ship, Japanese health ministry official Masami Sakoi said Thursday.

Hajdu said Canada will be keeping its eye on the examination of how the virus was handled on board the ship, especially as it relates to Canada's own upcoming tourist season.

Healthy Canadians from the Diamond Princess cruise ship will shortly be heading home, according to Canada's foreign affairs minister, after weeks under quarantine for the novel coronavirus, or COVID-19.

"There has been obviously concern about the practices on board the ship that have potentially led to the increased spread of the coronavirus on the ship," she said, adding that she also has empathy for Japanese officials who had to handle the quarantine of 3,000 people docked off a major city.

Canada has already started to prepare for how it will deal with tourists in light of the potential spread of the virus this year, she said.

As for the more than 200 Canadian evacuees and their families who have been serving out their two week quarantine at CFB Trenton, none have developed symptoms after their arrival from Wuhan, China, the centre of the COVID-19 outbreak.

The government is now working to help facilitate their return to their homes.

—With files from Hina Alam in Vancouver and The Associated Press

From Japan, a flight to evacuate Canadians from cruise ship is planned