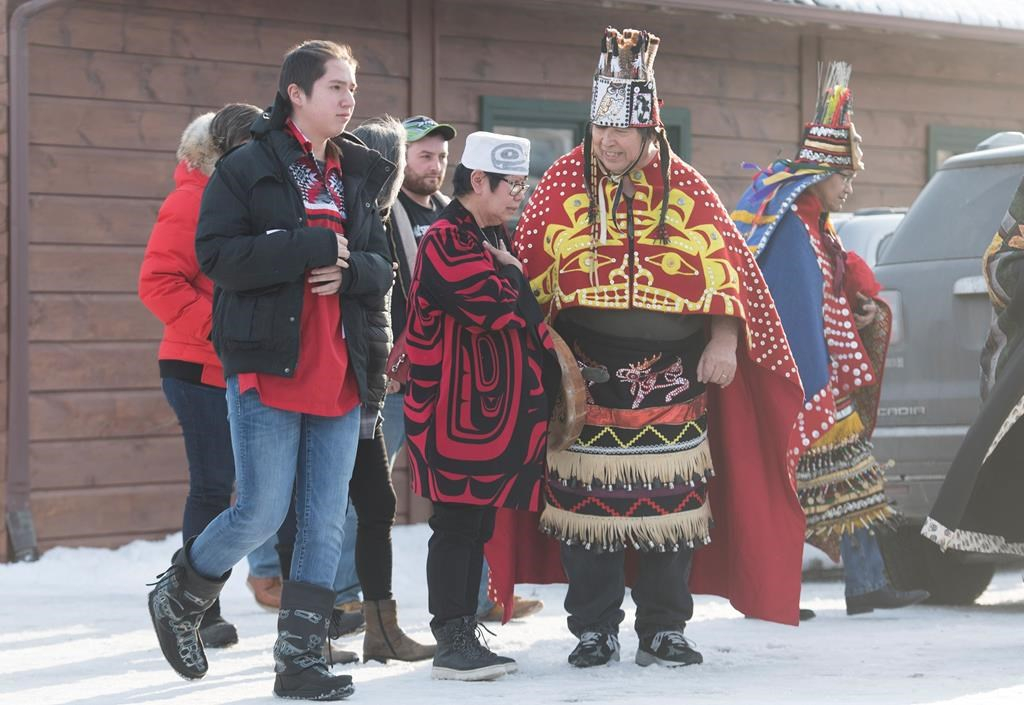 People leave a meeting between Wet'suwet'en hereditary chiefs and Mohawk leaders on the Kahnawake Mohawk Territory south of Montreal, on Saturday, February 22, 2020. Photo by The Canadian Press/Graham Hughes
Previous story
Next story

Traditional chiefs of the Wet'suwet'en First Nation maintained Saturday that they want to see RCMP gone from their territory and a halt to construction of a natural-gas pipeline on their lands to kickstart talks with the federal government and see a possible end to crippling rail blockades.

One of the chiefs made the remarks as chiefs met with Mohawks in Kahnawake, Que., the last stop on their tour of communities in eastern Canada where blockades have stopped passengers and goods from moving by rail.

Prime Minister Justin Trudeau said on Friday that barricades on rail lines and other major transportation routes must come down, stressing his government remains committed to dialogue and reconciliation with Wet'suwet'en hereditary leadership, but said attempts at negotiation had stalled.

Hereditary Chief Woos, one of a contingent invited to the longhouse in Kahnawake, said there's frustration on both sides.

"We're already at a point beyond frustration, it's more like confusion," said Chief Woos, also known as Frank Alec. "Mr. Trudeau is saying it's up to us, but we're saying right from Day 1, RCMP vacate the area and then there's going to be some talks and some possible paths forward on this situation right across the country."

Wet'suwet'en hereditary chiefs oppose the Coastal GasLink project that would carry natural gas to the B.C. coast, though some others in the community support the pipeline.

Chief Woos has said his people are willing to engage in nation-to-nation talks with the B.C. and federal governments providing their conditions are met.

Countrywide protests and blockades followed a move by RCMP to enforce a court injunction this month against the hereditary chiefs and their supporters, who had been obstructing an access road to a Coastal GasLink work site.

Wet'suwet'en hereditary chiefs visited supporters at Tyendinaga Mohawk territory on Friday and Kahnawake on Saturday to thank them for their support.

The traditional chiefs took part in "Words at Edge of the Woods" — a welcoming ceremony that took place at the Mohawk longhouse in Kahnawake.

"The reason why we're here is so we can express our friendship and our support, our thankfulness and our gratitude to the Kahnawake people," said Woos.

"Now we'll continue with that relationship."

Ghislain Picard, chief of the Assembly of First Nations of Quebec and Labrador, attended Saturday's meeting and said instead of putting the onus on Indigenous leaders, the federal government should do more to bring solutions to the table.

Picard said he agrees the RCMP should stay away, but also questioned the silence of the promoter of the pipeline project.

"There's also responsibility for Coastal GasLink, they're the ones who will be pulling in billions of dollars from this project, why don't they have anything to say?" Picard said. "Why wouldn't they be the one to take the lead and say we'll give the process a chance and stop working right now."

At least two blockades in Quebec have come down since Trudeau's comments, neither on Indigenous territory.

Late Friday, protesters left a site in St. Lambert, south of Montreal, where they had been blockading railway tracks since Wednesday.

This report by The Canadian Press was first published Feb. 22, 2020.