'It was everywhere': how lead is poisoning America's poorest children 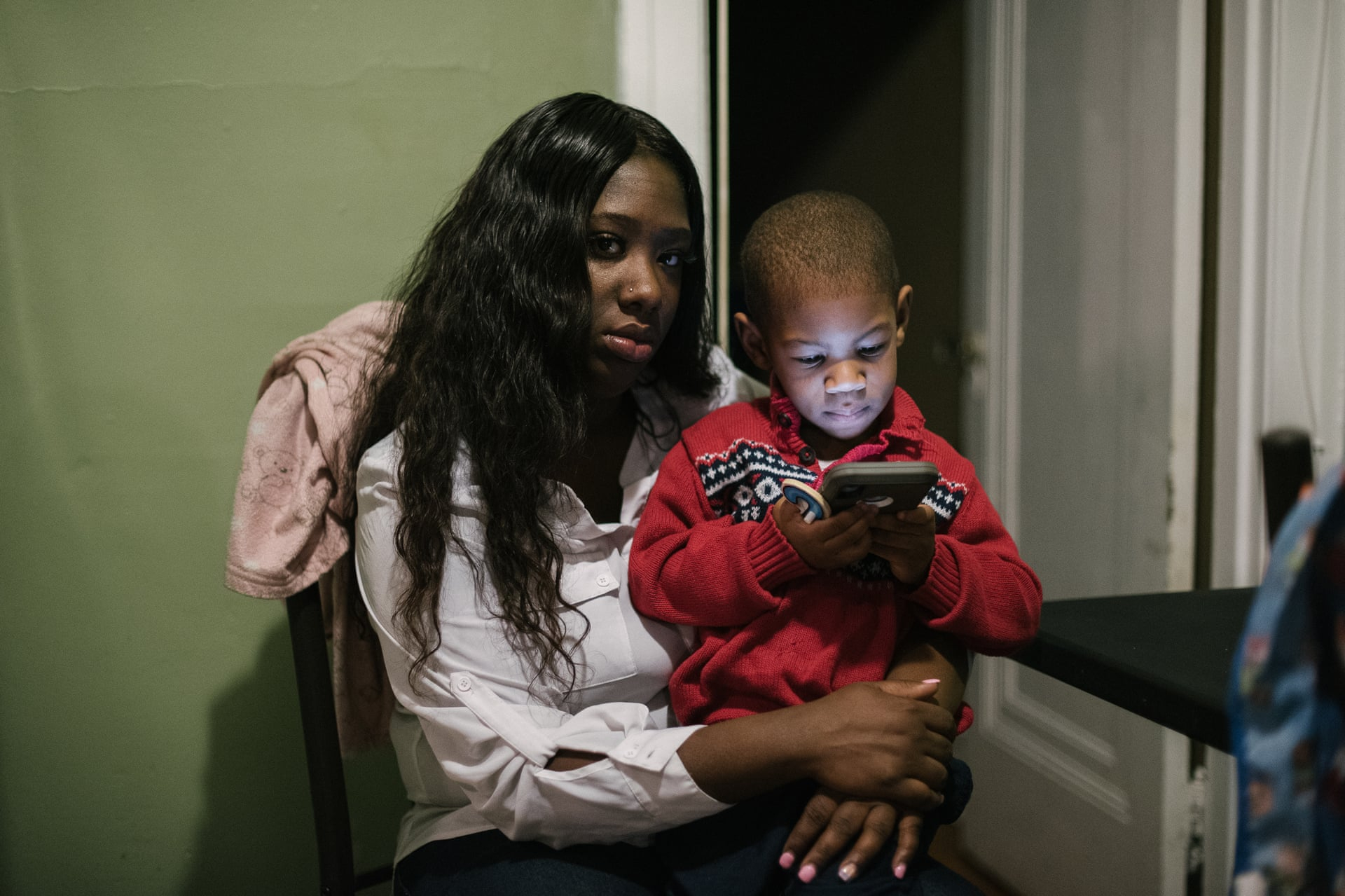 Shanaya Ball sits with her son, Amari, at her home in Philadelphia. Photograph: Hannah Yoon/The Guardian
Previous story
Next story

Shanaya Ball did everything right during her pregnancy: she attended check-ups, ate well, and kitted out the nursery for her son Amari, who was born in March 2017.

But by his first birthday, Amari had failed to meet almost every developmental milestone, and was unable to play, communicate or move like other infants.

Last August, aged two and a half, he was diagnosed with autism spectrum disorder – a complex set of neurological and developmental symptoms for which he will need long-term specialist support.

Ball, 27, was still reeling from the diagnosis when the pediatrician called with more devastating news: Amari had dangerous lead levels in his blood. He’d been poisoned at his Philadelphia home by lead paint crumbling off the old windows, door frames and skirting boards to create toxic dust ingested and inhaled by mother and son.

Ball did not know that Philadelphia has a huge problem with lead, especially in its older housing stock, often used by minority communities. Nor that powerful property interests are accused of weakening enforcement of health standards on the issue and refusing to properly tackle it.

“I knew nothing about lead, but it was everywhere, and my baby was crawling through it,” said Ball, a single mother who works at a convenience store. “I felt so guilty: was it my fault, should I have known?”

Lead, a heavy metal which has no smell and is invisible to the naked eye, is a suspected carcinogen and highly toxic to the brain and nervous system, as well as most other organs. It had been linked to reduced IQ, ADHD, school failure and criminality – even at low levels. Research suggests exposure during pregnancy may increase a child’s risk of developing autism.

There is no safe lead level, according to the Centers for Disease Control (CDC). Amari’s blood test showed 29.6 µg/dL (micrograms per deciliter) of lead. He’s almost three and very sweet, but he struggles to communicate and is emotionally volatile. The higher and longer the exposure, the worse the range and severity of the problems.

The toxin has endangered hundreds of thousands of kids. But parents in the hardest-hit neighborhoods may never be warned of the threat

I was told about breastfeeding, healthy eating, where to get free diapers, but not once was lead mentioned

Lead is mostly found in ageing water pipes, contaminated soil and old peeling paint – hazards found in an estimated 3.6m homes with young children nationwide, according to the Department of Housing and Urban Development.

In Philadelphia, 7.6% of under-sevens tested in 2018 – or 2,881 children – had blood lead levels of 5µg/dL or higher, according to recently published figures. The actual number is probably significantly higher, as only 30% of children were tested.

The lead burden is unevenly spread: an investigation by the Philadelphia Inquirer found that as many as one in five children are poisoned in the city’s poorest neighborhoods where mostly black, Latinx and migrant families live. About two-thirds live in rental properties.

“Lead poisoning is entirely preventable, but once the damage is done, it’s done. I don’t have anything in my back pocket to help, and the ramifications are long-term,” said George Dalembert, a pediatrician at Children’s Hospital of Philadelphia.

America’s modern-day lead crisis was exposed in 2016 by the scandal in Flint, Michigan, where 3% of children were poisoned after the city swapped to a cheaper water source. At the time, Philadelphia was among 17 cities in Pennsylvania where 10% to 23% of children tested were poisoned. A state investigation published last year found dangerous levels of lead lurking in all 67 Pennsylvania counties, with paint the most common culprit.

Lead paint was outlawed by the federal government in 1978 but in Philadelphia, for instance, about 90% of the current housing stock was built before the ban.

In 2012, city lawmakers passed a lead disclosure rule that required landlords with properties built before 1978 to provide tenants with children under seven with a lead certificate confirming the property is safe before they move in.

But the law has been largely unenforceable, according to campaigners, who claim that lobbying meant the legislation was watered down to favor landlords’ profits over safety.

After Amari was diagnosed, the health department gave the landlord 30 days to remediate the property, but it was four months – until January 2020 – before all the lead was removed. Amari’s blood level is finally falling but remains dangerously high at 20.

“I was told about breastfeeding, healthy eating, where to get free diapers, but not once was lead mentioned,” Ball told the Guardian as Amari asked for a cookie using sign language.

The scale of America’s lead problem is astonishing: half a million children under six had blood lead levels over 5µg/dL, according to the CDC in 2016 – despite a significant fall in cases over the past four decades. Thousands more probably had low levels of lead poisoning, which multiple studies have shown can also cause irreversible impairments.

Yet nationwide testing remains patchy, and the data is fragmented.

In Pennsylvania, only 19% of under-sevens were tested in 2018, of whom 8,822 were poisoned. In Philadelphia, only half the children born in 2015 who qualified for medical assistance had been tested twice by 2018, as required by federal law.

Lead exposure during pregnancy can cause miscarriage and impaired neurodevelopment, but prenatal screening is not mandatory.

“It’s incredible that in 2020 we still use children as canaries in mines to find lead in homes,” said Colleen McCauley, health policy director at Public Citizens for Children and Youth (PCCY), which advocates for better testing, data collection and universal remediation of older rental properties.

“It’s hard to sell primary prevention [to elected officials] because it costs money to find the lead and then more money to remove the hazards. This is an utterly shortsighted perspective, however, because caring for children after they are poisoned is much more expensive.”

Investing in tackling lead makes economic sense: eradicating lead paint hazards from older properties housing children born in 2018 would provide $3.5bn in future benefits – the equivalent of $1.39 per dollar invested, according to research by Pew Charitable Trusts. The investment would protect more than 311,000 children from low-income families over 10 years. Replacing lead water pipes would yield a further $2.7bn in future benefits.

Finally, after years of campaigning by child advocates, the Philadelphia lead disclosure law was recently amended. From October 2020, all private and public housing rentals must obtain lead safe certificates, without exception, or else face losing their licences. Similar policies in Rochester, New York, and Baltimore, Maryland, led to dramatic falls in lead poisoning cases.

“Public safety laws must have teeth. Landlords have to be scared of something or it won’t work,” said Grace Osa-Edoh, an attorney with Community Legal Services in Philadelphia who helps low-income tenants sue negligent landlords.

A state department of health spokesman said Governor Tom Wolf’s administration was “seriously concerned” about lead and other toxins in Pennsylvania. “The governor’s Lead-Free PA initiative includes the recent proposal to invest up to $1bn in grants to help remove and remediate lead, asbestos and other contaminants in schools. The state also recently received a federal EPA grant to test water for lead in upwards of 3,000 childcare facilities.”

But for hundreds of thousands of children, the legal changes and political concern come too late.

Fatu Kante will never forget the phone call from the doctor’s office last March, informing her that two-year-old, Aly, was poisoned with lead. “I didn’t know anything about lead until that call telling me my son’s brain could be damaged. I was shaking and crying. I didn’t sleep for 30 days,” said Kante, 37, a hairdresser originally from Guinea.

The health department cleaned up their spacious apartment after the landlord refused to get rid of the flaking paint poisoning Aly. The ceilings are still damp and sagging, but the lead dust is gone.

Aly’s latest blood test showed the lead level was down to 11, but he remains hyperactive and suffers from insomnia and unpredictable bouts of aggression. His sister, Cissy, four, is also mildly poisoned. Kemo, nine, has not yet been tested.

Kante said: “If we’d known, we’d never have moved into this house. Of course we’re scared.”

Just another nail in the

Just another nail in the coffin of the growing equality divide in the USA where health care, both fixative and preventative is linked not to need but to income.