Under Doug Ford, Ontarians can expect electricity emissions to triple by 2030 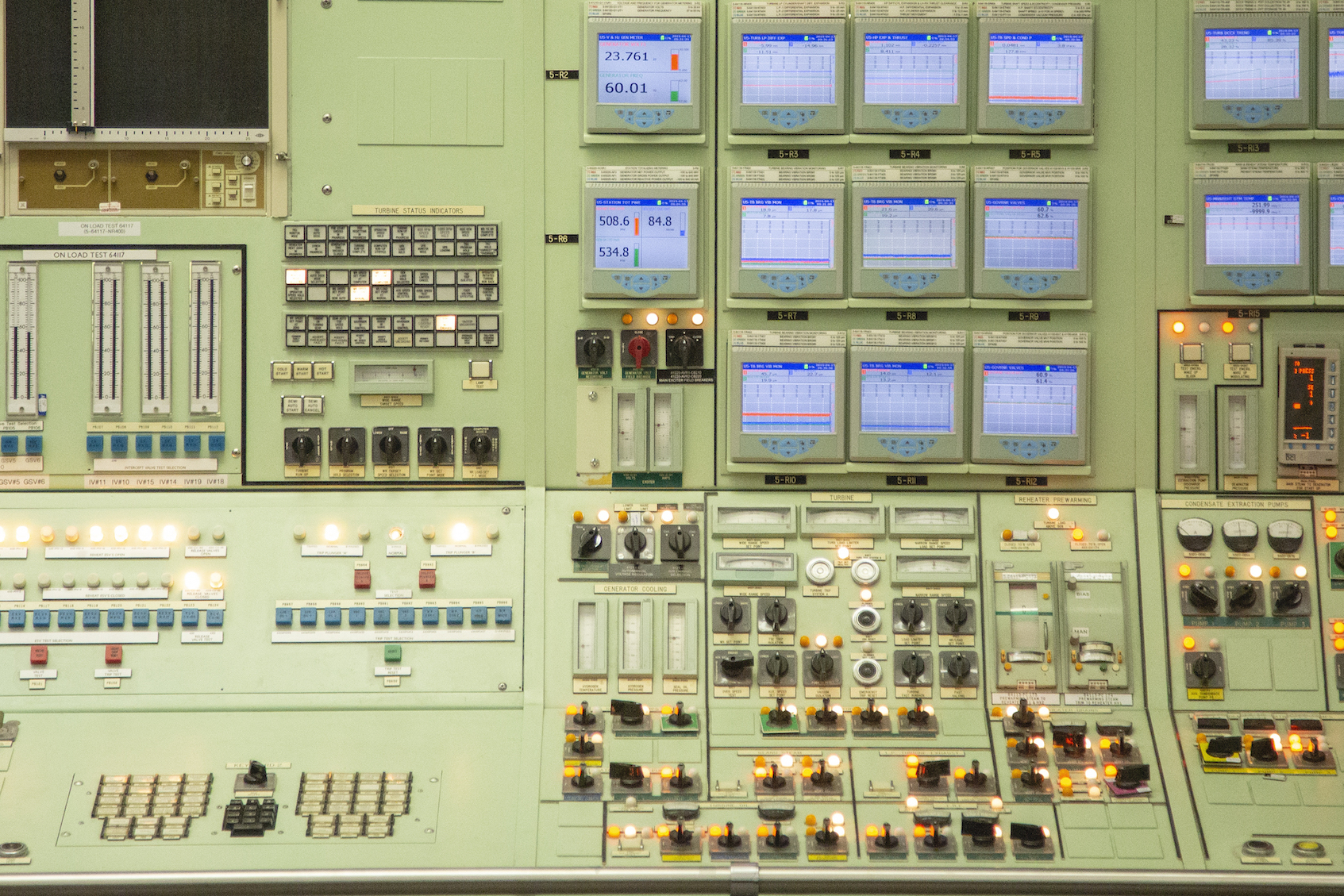 A view of the control room at Pickering Nuclear Generating Station during a tour for National Observer on April 17, 2019. Photo by Carlos Osorio
Previous story
Next story

Carbon emissions from Ontario’s electricity sector are set to almost triple over the next decade, as gas-fired generation largely fills the void left by major nuclear refurbishments and the dismantling of green energy under Doug Ford’s Progressive Conservative government.

The sharp jump in Ontario’s reliance on natural gas — the only source of operational emissions in its supply mix — comes as Ford’s government has also abandoned a wide range of energy efficiency programs and rebuffed an offer from Quebec to provide it with a long-term supply of cheap hydroelectric power.

Critics say that all of those greener options are now cheaper than either gas or nuclear, leading them to question Ford’s ability to deliver on a campaign promise to lower ratepayers' bills or get anywhere near achieving the province’s emission-reduction target of a 30 per cent cut from 2005 levels by 2030.

“It’s a very bad proposal,” said Jack Gibbons, the chair of the Ontario Clean Air Alliance. “It will mean Ontario won’t be able to meet its 2030 climate target, and that is simply not acceptable.”

Ontario’s electricity sector generated four megatonnes of carbon emissions in 2018. But it is set to double from that level by 2023 and to hit 11 MT by 2030, according to forecasts in the Independent Electricity Systems Operator’s (IESO) latest 20-year planning outlook, released last month.

Ontario’s auditor general said late last year that Ford’s threadbare climate policies would lead to the province missing its 2030 target by between 7 and 14 MT.

The province is planning to spend some $25 billion between 2016 and 2031 to extend the life of 10 reactors at the Darlington and Bruce plants, while the Progressive Conservatives are seeking to extend the life of a third aging plant in Pickering until 2025, which critics warn is a risky undertaking.

Electricity generation in Ontario had emitted 35.4 MT in 2005, when the former Liberal government was only a couple of years into the phase-out of coal-fired power. Coal had accounted for a quarter of the supply mix in 2003 and was gone by 2014. That effort is widely credited as the single biggest reason Ontario is anywhere near that 2030 target.

Much of the shortfall was picked up by a greater reliance on nuclear power, but now that it needs to come offline Ford’s government is looking to gas to pick up the slack.

“The real threat now is that all of that progress we've made is about to be reversed and emissions to rise again from the electricity sector as Ontario embraces more natural gas,” said Keith Brooks, programs director at Environmental Defence.

Ontario’s electricity sector generated four megatonnes of carbon emissions in 2018. That is set to double by 2023 and to hit 11 MT by 2030, according to the latest @IESO_Tweets forecasts

Underused gas plants to fire up

Ontario has a large fleet of gas-fired plants, which are typically underused. While they can produce more than a quarter of the province’s total capacity, they accounted for only eight per cent of electricity generation in 2016, according to the Canada Energy Regulator.

The IESO's projects that the share of Ontario's electricity supply that will come from gas will rise from 10 per cent in 2020 to 20 per cent in 2040, with its utilization rate increasing from 20 per cent to between 40 and 60 per cent.

Gibbons, a former commissioner of Toronto Hydro, said the province could avoid upping the use of existing gas plants and even walk away from the nuclear refurbishments not yet in process while still securing enough power for the province’s needs.

“We don’t have to operate the gas plants at as high a utilization rate as Premier Ford is planning, and we’re saying we can avoid the rebuild of at least eight of those nuclear reactors,” he said. “And those savings, because they are such a high-cost option, will mean we can actually lower our bills while we are buying more low-cost waterpower from Quebec and while we’re investing in energy efficiency and investing in cost effective Made-in-Ontario green energy.”

But the Ford government has so far moved in the other direction on all these fronts, cancelling some 750 wind and solar projects, cutting budgets for energy efficiency programs and turning away from an existing memorandum of understanding to import hydroelectricity from Quebec.

The Ford government did not respond directly to questions about how it intends to mitigate or offset this expected increase.

It also did not say whether it would consider the emissions implications of a report Energy Minister Greg Rickford has asked the IESO to submit by the end of February with recommendations on “any and all viable cost-lowering opportunities” related to larger gas, wind and solar contracts that expire in the next ten years.

“There is no one single environmental approach or solution that fully addresses the needs of all provinces, regions or communities,” environment ministry spokesperson Gary Wheeler said. “That is why our environment plan and modeling will continue to evolve as to address the environmental priorities of Ontarians as new information, ideas and innovations emerge.”

While the Ford government has yet to publish its long-term energy plan, the knock-on effects of its signalling have already started, with Enbridge Inc citing the expected expansion of gas to produce electricity as justification for its recently filed application to the Ontario Energy Board seeking expansion of its pipeline capacity through Hamilton.

Mike Schreiner, the leader of the Green Party of Ontario and MPP for Guelph, wrote to Rickford in January asking him to oppose the application, arguing that both the government and the company would be better off investing in energy efficiency rather than burning more fossil fuels.

He said the average cost to ratepayers of energy efficiency programs was 2.1 cents per kWh in 2016, while rebuilt nuclear could cost us up to 18 cents per kWh by 2025. He noted that Quebec had offered its hydro power at 5 cents per kWh. (Ontario would need to invest in additional transmission capacity were it to take up the offer.)

“Dollar for dollar, electricity conservation programs are less expensive, per unit of electricity, than any form of new generation,” he wrote. “Yet last year your government abandoned a swath of energy efficiency programs that were helping people to save money by saving energy.”

David Heeney has seen the impact of those cuts first-hand.

The CEO of energy and environmental consultancy IndEco has seen a lot of his work with local electrical utilities disappear since Ford came to power and cut funding for their energy efficiency efforts.

That work has been added to the mandate of the IESO, which he said has been slow to fill the void and lacking in local knowledge that Ontario’s 60-odd local distribution companies have about how to administer the efforts.

“The local utilities were shaking the bushes trying to get people to sign up, and the IESO’s conservation office is in downtown Toronto and have limited capability to do that.”

“It’s really a pity, because the local distribution companies in the past were all about wires and poles, and then when the Liberal government introduced the requirement that they deliver energy efficiency they were really getting that into their DNA,” he said.

I don't know how it's related

I don't know how it's related but I just received an invitation from Hydro One, my distribution company (I'm a rural resident), to switch over from gas or oil to electric heating. Is this a return of the old Ontario Hydro promoting demand to justify the massive nuclear build out of the 60s and 70s?
Second comment: why does nobody ever mention geothermal heating and cooling? We retrofitted to get rid of baseboard heaters and cut our electricity bill to one third of the old, and still no combustion.

I saw a BC Hydro ad the other

I saw a BC Hydro ad the other day for installing a heat pump. In BC near the coast, you don't even have to dig down to run the air underground to pick up geothermal; air heat-exchange will do. A whole community on Haida Gwaii switched to heat pumps.
https://www.nationalobserver.com/2018/03/15/video/skidegate-band-council...

I wouldn't be surprised if BC Hydro was really just trying to justify Site C; but both utilities have the excuse that they're working for decarbonization. Well, not Ontario any more.

Even Kenney's Alberta is happy to put in more and more wind generation, and we actually sell coal still. BC sells more; but neither province pretends they want to use it anymore.