New York plastic bag ban comes into effect, but not without bickering 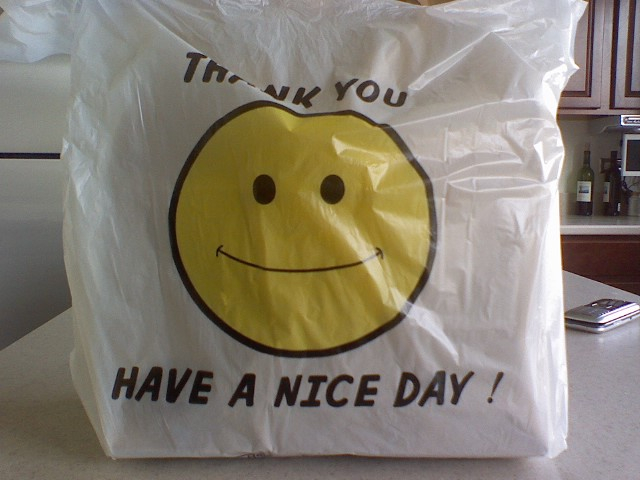 A bag with a smiley face design that bids the viewer "Thank you" and "Have a nice day!". GorillaSushi from Aurora, IL, US / CC BY-SA 2.0
Previous story
Next story

A plastic bag ban will come into force in New York on Sunday, a moment hailed by environmentalists but marred by last-minute bickering.

California and Hawaii have implemented bans on plastic bags but New York, another bastion of progressive policymaking, has been stymied amid fierce lobbying by the plastics industry and concerns over the impact on low-income residents.

Climate campaigners have also pointed to the sizeable planet-warming emissions which come from churning out billions of plastic bags for short-term use.

New Yorkers get through an estimated 23bn single-use plastic bags each year. Around 85% end up in streets, landfills, waterways and recycling machines. The new law is aimed at swiftly transitioning to alternatives: stores will be required to sell paper bags at five cents each or offer sturdier reusable bags that can be used at least 125 times.

It’s going to be a bumpy rollout. The supply of paper bags is limited and stores are having difficulty getting them

“I’m excited, it’s going to be great,” said Peter Iwanowicz, executive director of Environmental Advocates of New York, who has already seen his local supermarket in Albany clear out its plastic bags.

“It’s taken New York longer than you would expect, but it’s better late than never. There is broad public support for plastic bag bans and so people will shame those who flout it.”

Some store owners have said they are not ready for the ban, claiming it will hurt their businesses and place an unfair cost burden on low-income people.

“You hurt the small bodegas that are the heartbeat of New York,” said Frank Garcia of the National Association of the Latino State Chambers at a recent protest at City Hall. “They’re not gonna survive.”

There are around 13,000 bodegas in New York City and many are scrambling to find alternatives ahead of the plastic bag ban. A rush on paper bag supplies has led to shortages, raising the prospect of no bags at all in some stores.

New York will require around 4bn paper bags, more than half of all production capacity in North America, according to Novolex, a major bag manufacturer.

“I think it’s going to be a bumpy rollout,” said Jim Calvin, president of the New York Association of Convenience Stores. “The supply of paper bags is limited and stores are having difficulty getting them. I just hope everyone remains patient.”

Pro-ban campaigners argue that New Yorkers should fare no worse than people elsewhere in the US and overseas. Bans have been rolled out in England and Italy, with China set to phase out non-degradable bags, as well as plastic straws, in major cities by the end of the year.

A series of exemptions have been made to the New York ban. Disposable plastic bags will be allowed for wrapping uncooked fish or poultry, for loose vegetables or grains, for newspaper deliveries, for dry-cleaning services and for food takeaways and deliveries. New Yorkers will still be able to buy plastic bin bags – potentially leading to an increase in sales, as has reportedly happened in California.

State authorities have also said there will be an indeterminate grace period. Once enforcement starts in earnest, stores still giving out single-use plastic bags will be warned, then hit with a $250 fine.

Many stores in New York City have put up signs explaining the ban, with some larger outlets removing plastic bags early. In one Key Food store in Brooklyn this week, a dearth of plastic bags left some shoppers stuffing purchases into their pockets or handbags.

“I don’t know if I’m happy about it,” said one customer who gave her name as Rachel. “I suppose it will be good for the amount of trash. You see these bags flying around in the street, they get into the trees, everywhere.”