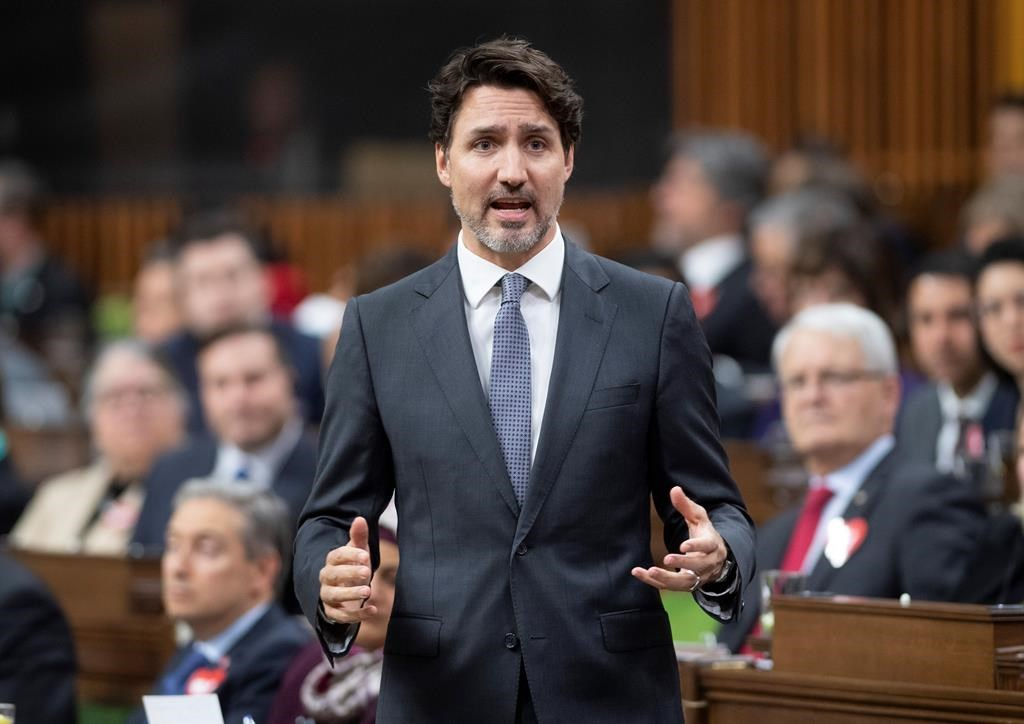 Prime Minister Justin Trudeau responds to a question during Question Period in the House of Commons on Tuesday, March 10, 2020 in Ottawa. Photo by The Canadian Press/Adrian Wyld
Previous story
Next story

The federal government is rolling out a $1-billion funding package to help the country's health-care system cope with the increasing number of new coronavirus cases and to help Canadian workers who are forced to isolate themselves.

The measures come on the same day the World Health Organization said the COVID-19 outbreak has become a pandemic.

—$500 million to help provinces and territories with things like buying equipment, increased testing for COVID-19, and enhanced surveillance and monitoring

—$275 million for research for a vaccine

The Liberals are also easing restrictions on employment insurance payments for people who take time off work and self-isolate due to illness by waiving the waiting period for benefits.

The federal government is rolling out a $1 billion funding package to help provincial health-care systems cope with the increasing number of new coronavirus cases and to help Canadian workers who are forced to isolate themselves.

This would also make it easier for people with more precarious jobs to stay home and avoid infecting others, reducing the disruption to their incomes.

Trudeau said the government is already preparing to do more if need be to provide support to Canadians as the situation progresses, including providing EI sickness benefits to those who don't qualify for the program, such as those who are self-employed and "gig economy" workers.

He also indicated the government is considering what to do with incoming cruise ships to Canada, given the warning from the Public Health Agency of Canada to avoid them because of the risk of contracting COVID-19.

The announcement came as multiple health authorities were reporting a flurry of new positive tests for the virus that causes the illness. Ontario has 41 cases, including one in a man in Sudbury who attended a large mining conference in Toronto. Quebec now has seven.

The Public Health Agency of Canada also said that one person at Canadian Forces Base Trenton has tested positive. The person had been repatriated from California after a cruise on a ship that saw multiple infections and has been in quarantine at the Ontario base with hundreds of others. He or she is now in isolation, according to the health agency, which is monitoring the passengers.

Trudeau wouldn't say if there would be a time when the government needs to take stricter measures like community-wide lock downs, such as those in China and Italy.

"It's not about time. It's about the situation and the facts on the ground. We will closely monitor what is needed to be done to keep Canadians safe," Trudeau said.

"While we are prepared for a wide range of scenarios, we will focus right now on what needs to be done now and endeavour to make sure that is enough, that we don't have to take future steps."

There are few confirmed instances of community transmission of the virus that causes COVID-19 in Canada, but the number of cases continues to grow.

Trudeau says Canada has been fortunate so far, but Canadians individual behaviour — like washing hands, coughing into an elbow — can slow the spread of the infection.

The illness has sickened more than 100,000 people around the world.

Underlying the raw numbers is uncertainty about the depth and duration of the outbreak domestically and abroad. COVID-19 has shuttered factories in China, left Italy under lockdown, disrupted supply chains that Canadian businesses rely on and slowed the global economy.

Conservative MPs said the Liberal response is short on specifics and should have happened weeks ago.

"There's dollars and headings but no details," said Conservative finance critic Pierre Poilievre. "We don't know exactly how those dollars are going to be spent or what exactly they are to achieve. It seems like the government knew that it needed to announce something after six weeks of little to no action and so they rolled out today with a press conference and some public relations but no plan to react to the crisis."

Alberta MP and Conservative health critic Matt Jeneroux said he was hoping the government would expand extra screening measures for passengers arriving in Canada from more than just Iran and China, to other countries where the virus is rampant, including Italy.

The government plans to provide financing to businesses through Crown lending agencies, like the Business Development Bank of Canada, to help companies access credit to handle the economic shock. A similar program during the financial crisis just over a decade ago provided $11 billion to $10,000 firms.

Changes to the federal work-sharing program, which supplements wages when workers cut hours to avoid layoffs, will target companies affected by COVID-19 by doubling the length of benefits to 76 weeks from 38.

And the government says in a release that it is offering flexible payment plans to help businesses meet their tax obligations to the Canada Revenue Agency, which business groups have said should help with cash-flow issues.

This report by The Canadian Press was first published March 11, 2020

Coronavirus: The worst way to drive down emissions