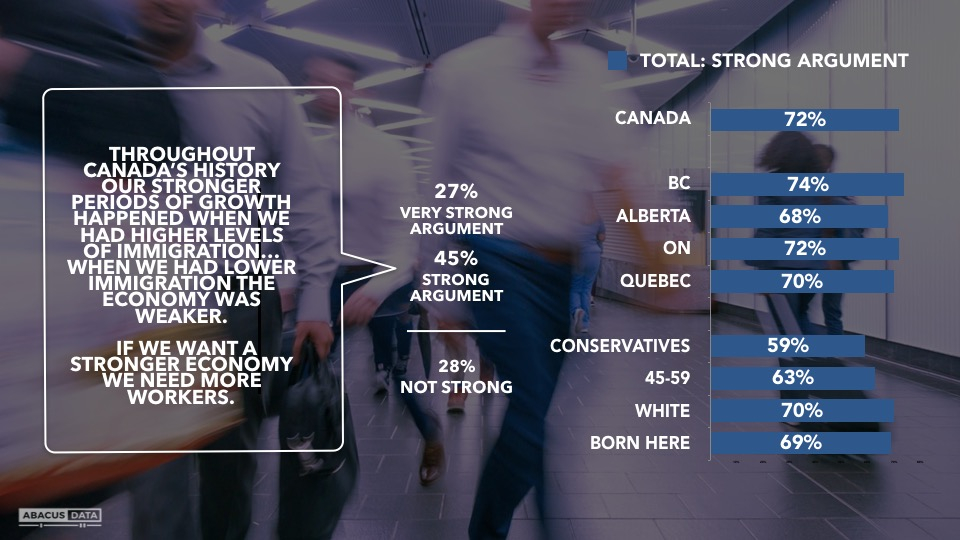 Graphic by Abacus Data based on Abacus's polling information.
Previous story
Next story

Immigrants do get the job done. But is it a problem if not enough people know that?

In the last couple of weeks, we at Abacus Data conducted some fresh public opinion research on this topic. Here’s what we found.

These views don’t square with the evidence.

Canadians should take note of some important truths, recently described by Canada’s new Minister of Immigration and Citizenship, Marco Mendicino.

The inescapable reality? Immigration is probably the single best - and most crucial - economic and fiscal choice Canada could make. It’s not a nice to do, it’s a need to do.

Canadians are having fewer children. Our fertility rate is 1.5. But 2 is the number it takes to hold our population steady. Life expectancy is up 11.5 years since 1960. We’re on a fast track to having more old people who need support, and fewer workers to help carry the load.

What’s more, the facts about Canada’s economy over past decades couldn’t be more unequivocal. When immigration is up, our GDP is higher; when levels are lower, the opposite happens.

What does this mean? Immigration is probably the single best - and most crucial - economic and fiscal choice Canada could make. It’s not a nice "to do", it’s a need "to do".

For people who worry about whether the economy has enough jobs for more immigrants, the bigger worry is what happens if we don’t have more workers coming into the economy. Today 4 in 10 small and medium companies have trouble finding the employees they need. There are labour shortages in Atlantic Canada, BC, Ontario, in manufacturing, retail and construction. Too few workers is leading to slower sales.

For several years, conservative voices in Canada and elsewhere have been drilling away at immigration – pushing the idea that immigration is trouble, a drain on our finances, a security threat, an idea that puts your job - maybe even your life – at risk.

Donald Trump has made this theme central to his pitch to "Make America Great" – a better America is one that looks more like you and turns people who don’t away at the border.

Brazil’s President Bolsonaro praised Trump, saying “the vast majority of potential immigrants do not have good intentions.” Much of the undertone to the UK Brexit debate centred on the idea that immigrants were an economic problem for Britons.

Here in Canada, one leading political figure proposed a “values test” for immigrants. If it was a dog whistle, it was a lousy one, because we could all hear it. Another formed a new party to be rail against “extreme multiculturalism.

Most Canadians decided not to But along the way, doubts were planted about the value of immigration for Canada. Doubts that are based on a lack of understanding of some basic realities.

Nevertheless, there’s reason to hope a rational debate will leave more people supporting an immigration growth policy that is so clearly in their collective interest.

We explored reactions to a couple of key facts and found 72% said it was a strong argument that throughout our history high immigration and higher economic growth went hand in hand. And 75% had the same reaction to the fact that aging and fewer children mean our social programs will be starved for tax dollars if we don’t have more immigration.

In the course of a short survey, we tested belief in the value of more immigration before positing these two arguments, and again afterward. The impact of knowing a bit more about our economic past and our fiscal future was a 13-15-point jump in support for more immigration.

Of course, the world of politics doesn’t work that cleanly. Stories about illegal entries and social friction get plenty of coverage. The temptation to tease out and nurture resentment is clear around the world. But the politicians who’ve gambled on it in Canada, lost their bet.

If that’s not enough of a reason for politicians across the spectrum to support more immigration let’s try this – the alternative is slower growth, fewer jobs, uncertain social programs and pensions, higher taxes and more public debt.

Are Canadians ready to embrace an increase? They could be. But it’s not easy.

We need politics to do better.

Canada to increase immigration levels over next three years

Immigrants are what we need.

Immigrants are what we need. As a 74 year WASP, retired, our country has positively evolved. I fit into the Liberal side and Conservatives have been Xenophobic since I was young. As an Albertan, racism is more rather than less here in Alberta, fueled by the alt-right, and the rebranded ID-CANADA , which is now selling itself green!

First let me be clear that I

First let me be clear that I like immigrants; I like the people and the diversity they bring to Canada. What I do not like is the promotion that GDP growth is good. I do not like the idea that more people here is good; I have seen the effects of population growth: there are things I used to do that I am not allowed to do now because there are too many people, and of course the population increase is at least partly responsible for the fact that my grandchildren have no prospect of buying a house.

So let us have immigration that keeps the population stable or decreasing slightly. Let is also pay Canadians enough so that they are willing to do the jobs that now rely on immigrants. The plutocrats won’t like that; they need to be brought under control.

I also like a lot of what immigrants have brought, not the least, an awesome variety to the foods we consume.
I agree that GDP and "economic growth" aren't in themselves any kind of holy grail to be reaching for: and just as with immigration itself, the devil is in the details.
The post WW2 situation was much different from now, in several aspects. It seems to me that "importing" immigrants to be part of a growing poverty class isn't useful. OTOH, neither is it particularly useful to "import" strongly right-leaning "business class" immigrants.
It seems to me that there are happy mediums, and that we miss the boat some of the time.
The cause of high housing costs isn't, I think, that we have "too many immigrants," but rather that housing has become a commodity, not shelter for owner-households, or built-to-purpose residential rentals.
There's an excellent film called PUSH speaking to that perspective, which you can find a link to on the TVO Agenda program for I believe it was March 3 of this year.
The population needs to grow, but in ways that are conducive to improvements in health, pollution levels, and clean energy production, to name but three.
That doesn't, IMNSHO, include providing subsidies and tax breaks because foreign corporations "require" them, with nothing real in return.
Bringing back aspects of the Foreign Investment Review Act might be a good place to start. So would making purposely empty apartment buildings an allowable investment for hedge funds, etc.