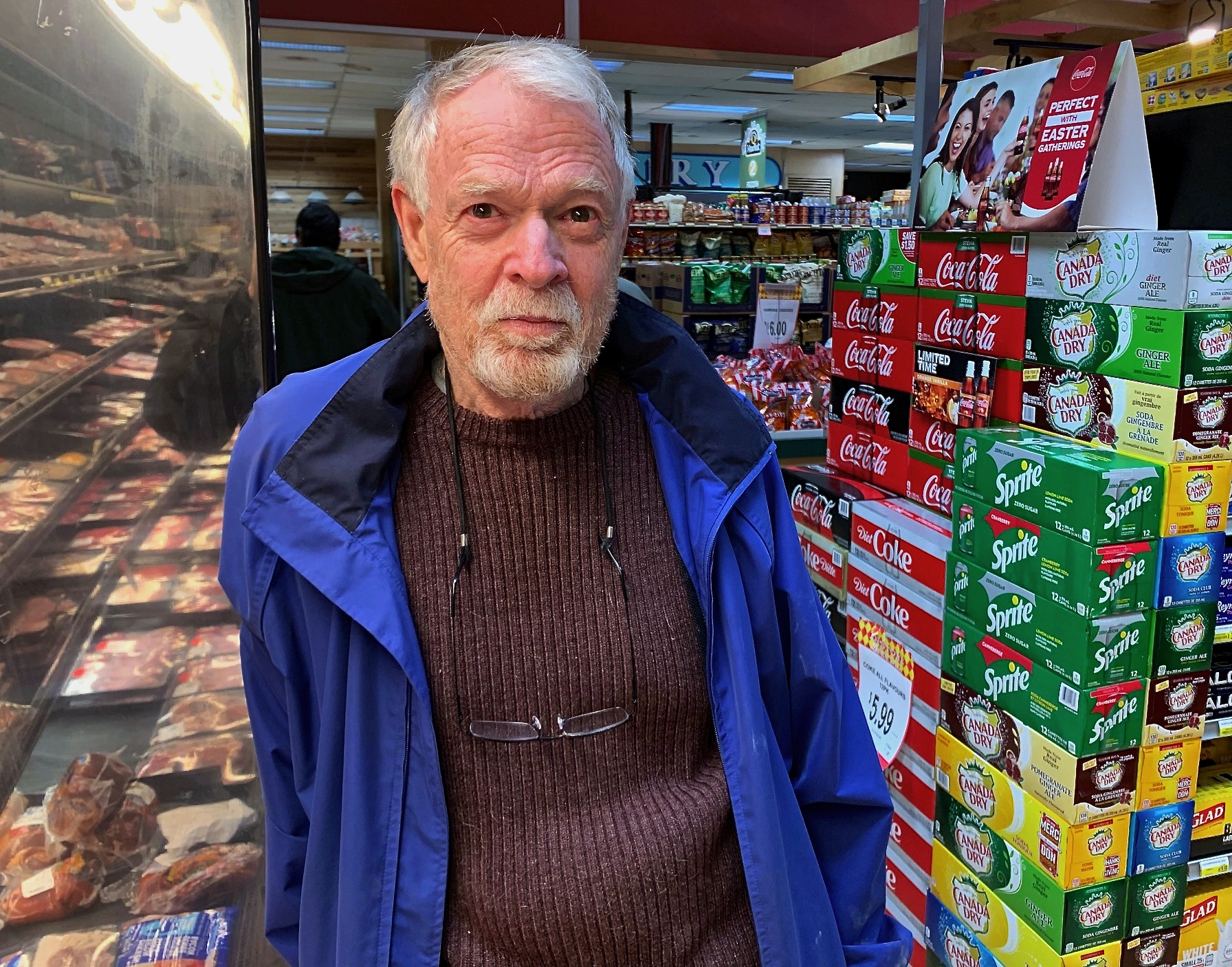 A wave of alarm over COVID-19 hit the shores of some of B.C.’s more isolated islands after federal and provincial authorities have announced a series of wide-ranging measures to quell the spread of the virus within the last week.

“I’m 77, I’ve got COPD and I don’t want to catch it,” said Quadra Island resident Don McEachern on Saturday while checking on how well the local grocery store was stocked.

McEachern, who has chronic obstructive pulmonary disease, and his wife Betsy had been discussing how to prepare for the arrival of the virus on the small island off the northeast coast of Vancouver Island.

But the sense of urgency has increased after the province barred events of more than 250 people and recommended a two-week self-isolation period for travellers returning to Canada at week's end, McEachern said.

On Monday, both the provincial and federal government enacted even more restrictive measures to contain the pandemic.

All the deaths were residents of the Lynn Valley Care Centre in North Vancouver.

“I want to ask everybody in British Columbia to be measured in their purchase of groceries and other necessities,” pleaded B.C. health officer Dr. Bonnie Henry. “We’ve been assured by our retailers that our supply chains are strong"

An additional 30 new cases of COVID-19 are confirmed since Saturday, bringing the total individuals affected to 103, she said.

She declined to elaborate which communities the patients hailed from within Island Health, which covers Vancouver Island and surrounding islands.

The province is now tightening restrictions and prohibiting gatherings or events of 50 people or more, she and Dix announced.

Justin Trudeau declared Canada is closing its borders to travellers who aren't Canadians or permanent residents, with the exception of U.S. citizens, air crews, diplomats, and the immediate family members of citizens.

Travellers returning to Canada displaying symptoms of COVID-19 won't be allowed to board flights, said Trudeau, adding airlines will be required to do basic health assessment on each passenger based on guidelines from Canadian public health agency.

"I know this news will spark concern among Canadians travelling abroad. I want to assure you that our government will not leave you unsupported," he said.

Federal funding will be available to asymptomatic travellers to cover the travel costs of getting home or temporarily cover the cost of basic needs while travellers wait to come back to Canada, he added.

Domestic flights and flights from the U.S., Mexico and the Caribbean will not be affected and none of the measures apply to commerce or trade.

The news follows a federal government missive to Canadians travelling abroad on Sunday to return home while commercial flights were still available.

“We’d been talking about getting ready, but just before the weekend things just got more serious,” McEachern.

His household has laid in food and hand sanitizer, is washing their hands frequently and maintaining a certain distance when greeting people.

“And we’re prepared to stay close to home for the next six weeks.”

There’s been a shift in attitude among other residents as well, McEachern observed.

His wife saw people leaving with armloads of toilet paper at the Heriot Bay store Friday, he said.

There was no toilet paper at the grocery store at the island’s other village centre, Quathiaski Cove by Sunday morning.

A note informed shoppers of a new limit of two items for any kind of bathroom tissue.

While toilet paper was scarce, food was not in short supply at the Quadra grocery stores over the weekend.

But it was a different story in the town of Campbell River, Quadra Island’s nearest commercial centre located 15 minutes away by ferry.

Not only was toilet paper gone, but shelves were near bare of staples such as meat, potatoes, onions, carrots, rice and pasta at Superstore and Save on Foods on Sunday evening.

​The provincial health officer appealed to people not to give into anxiety and resort to panic buying and hoarding, during a press conference Saturday.

“I want to ask everybody in British Columbia to be measured in their purchase of groceries and other necessities,” said Henry.

“We’ve been assured by our retailers that our supply chains are strong, and that they are restocking the shelves.”

“We don’t have an issue of not having enough supply.”

A flurry of announcements about the cancellation or postponement of public events or programs on Quadra and Cortes islands began Thursday hours after the province suggested cancelling large gatherings of 250 or more.

And by Monday, the maximum number of people allowed at any B.C gathering or event dropped to 50.

Rebecca Young, executive director of the Quadra Community Centre (QCC), had already announced on Friday that the Community Kitchen weekly lunch was suspended because of the higher risk involved in food preparation.

Previously QCC had been leaving the decision to cancel programming or events to programmers because nothing scheduled involved as many as 250 people.

Although, she did note that policy could change at any moment.

“We’re trying to be not alarmist but cautious, and just thinking about everybody in our community,” said Young.

Cortes has just over 1000 residents and the hall operates more like a community centre for people on the south end of the island.

Events like the artisan's market, parents and tots drop in programs, a café, seniors lunches, literacy events, birthday parties and activities such as yoga and dance classes won’t be taking place, Lavelle said.

The hall doesn’t hold 250 people, but the board acted out an abundance of caution, she said.

“We don’t have those numbers, but we’re going to be cheek to jowl,” she said of the hall’s small space.

“We do have the proximity factor, and we have an aging population. Should the virus appear, we would have a fair number of people at risk.”’

Cortes Island is remote, located between Vancouver Island and the B.C. mainland, with access to the island being by plane, or boat or ferry from Quadra.

Though it’s isolated, people come from all over to the island during holidays and the approaching tourist season, she added.

On Friday, Henry reiterated the province’s recommendation to avoid all non-essential travel outside of Canada. And anyone who travels abroad is still expected to self-isolate for 14 days when they return to B.C., she said.

But she clarified travel involving the critical movement of goods and people across borders by truckers, ferry or transit employees and flight crews was considered essential.

Those individuals should still be watchful for any symptoms of the virus, and self isolate if necessary, said Henry.

On Quadra and Cortes, both ferry dependent islands, some residents are worried BC Ferries will shut down and leave the islands cut off.

Deborah Marshall, BC Ferries executive director of public affairs, said Friday all efforts were being made to continue uninterrupted service.

“We’re going to do everything we can to provide the same service we do today,” she said.

Ferry crews and staff are doing extra cleaning on the vessels and at terminals.

There were no significant staff shortages due to novel coronavirus as of the week’s end, she said.

If employees feel ill, they are directed to stay home, and the ferry service has a number of measures to address absences, she added.

“We have a number of staff that can backfill. We’ll also make every effort to move crews around,” Marshall said.

“It’s something we’re going to have to monitor closely. It’s a very fluid situation.”

However, BC Ferries did scale back sailings between the mainland and southern Vancouver Island terminals because of a drop in passenger demand on Sunday and Monday.

BC Ferries is asking passengers to help out by washing their hands and by practicing social distancing while on board the vessels, Marshall said.

The traditional hugs and handshakes between islanders on Quadra Island plummeted over the weekend.

Resident Judy Hagen has been teaching friends her new form of greeting, the toe tap.

“I do the French version and tap each foot,” she said.

“I just like it a lot better than the elbow bump.”

Sitting inside one of Quadra Island’s coffee shops on Sunday, Arne Liseth says he hasn’t seen traffic in public places drop off just yet.

He was still planning to get together with his friends for their regular morning chats this week.

“Once I hear there are a dozen on Quadra, I might change my mind.”

“I’m singing happy birthday twice in my head when washing my hands,” he said.

He noted even if people should stop going to crowded bars or restaurants doesn’t mean they can’t enjoy themselves outside.

The provincial health officer expressed the same sentiment during her public briefings.

Taking precautions to flatten the curve of novel coronavirus didn’t mean a halt to all and every activity, said Henry on Friday.

Avoiding crowds and social distancing did not mean families could not enjoy activities outdoors, in small groups during spring break, she noted.

“We are not talking about shutting down society here,” she said.

Restrictions ramp up as COVID-19 continues to spread