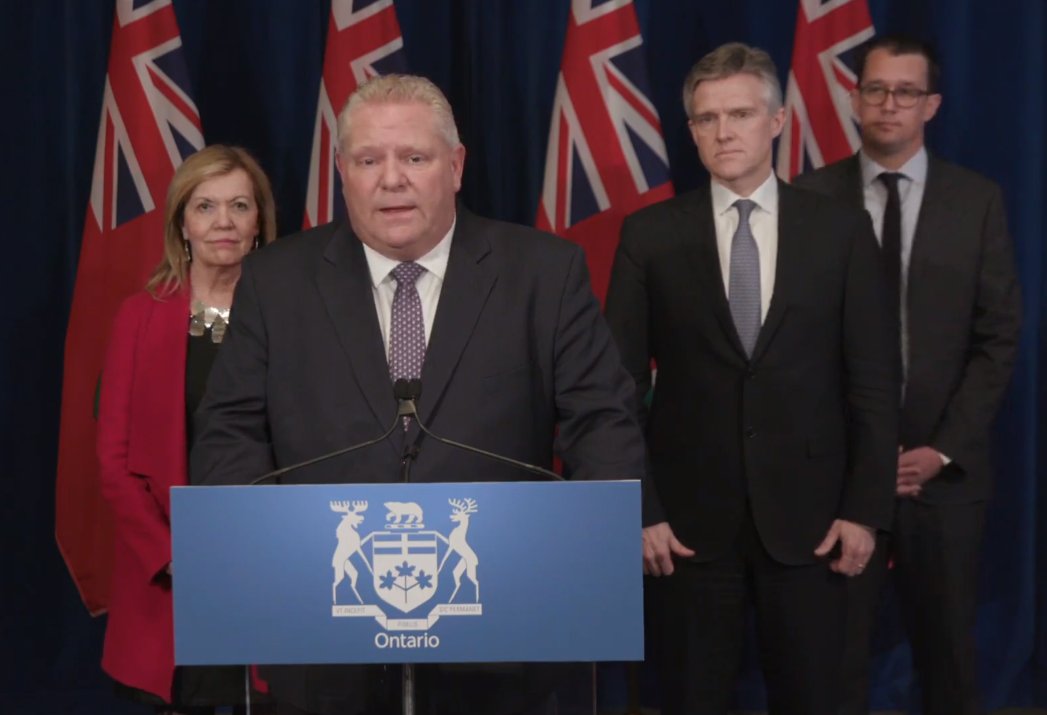 As Ontario Premier Doug Ford recalled the Legislature Thursday to pass emergency measures to help workers through COVID-19, the province recorded its second death related to the worsening pandemic.

The patient who died was a man in his 50s with an underlying health condition who appeared to have contracted the virus through community spread, Halton Region Public Health said. The man, who was from Milton, was hospitalized there on March 11 but was transferred to Oakville Trafalgar Memorial Hospital as his condition worsened. He died upon arrival there Thursday morning and was confirmed to have the novel coronavirus at 9 p.m. that evening.

"Do not be selfish," he added.

It wasn't immediately clear when the man in the Halton region died. The death was not recorded in numbers released at 10:30 a.m. Eastern by the province, or the Halton region's figures from March 18.

Ontario reported 43 new COVID-19 cases Thursday morning, bringing the total number of active cases to 251. Of those, 22 are hospitalized, and roughly 80 per cent of the cases are linked to travel outside Canada.

The jump in cases isn't surprising, said Dr. David Williams, Ontario's Chief Medical Officer of Health. As people more people return from abroad, Dr. Williams said the number of new cases per day could be as high as 60.

The province is at a "critical time," he said. "We need to stay the course now."

Meanwhile, the province's ongoing backlog of pending test results swelled by another 593, reaching a total of 3,972. Elliott has said the province is working towards being able to process 5,000 tests per day, though no official has said when that may be possible. Ontario posted just over 2,100 test results Thursday.

The patient who died was a man in his 50s who had an underlying health condition. The Progressive Conservative government plans to pass emergency measures Thursday aimed at preserving jobs during the pandemic.

Ontario's first death linked to the novel coronavirus was reported on Tuesday. A coroner's investigation is still determining whether the 77-year-old man from Muskoka, who was found positive after his death, died from COVID-19 or if he happened to have it when he died from other causes.

Public health officials in Ontario and elsewhere continued to issue extraordinary pleas for the public to isolate themselves as much as possible to slow the spread of the virus and prevent the healthcare system from being overwhelmed.

"Gatherings and parties can wait, playdates can wait, some of your errands can also wait," said Dr. Hamidah Meghani, the Halton Region's Medical Officer of Health.

"Allow your life to pause. Focus on what is important."

On Thursday, the Ontario Legislature sat to pass two emergency bills. One protects workers who must stay home due to COVID-19 from losing their jobs, while the other blocks employers from asking employees for sick notes during the pandemic.

When Ford announced the measures Monday, opposition NDP Leader Andrea Horwath said they were necessary but not enough. On Thursday, she repeated that message, saying her MPPs would vote for the measures but they "simply cannot be the only help" provided by the government.

Horwath said her party pushed the Ford government to include other measures, like ensuring workers who must miss work are still paid, but she said the governing Progressive Conservatives declined.

"These provisions fall very short of what’s needed," she said.

On Thursday, Ford also announced the province would exempt grocery stores from noise laws, allowing them to accept deliveries any time of day and restock their shelves faster.

It also announced moves to allow city councils in Ontario to do business remotely so they can practice social distancing, and to ask distilleries to make hand sanitizer.

"I’m asking people once again be patient and do your part," Ford said. "We need to beat this virus."

Editor's Note: This story was updated at 3:15 p.m. Eastern to include more details about the emergency measures passed by the Ford government. It was updated again at 5:50 p.m. to include information from a briefing by Dr. David Williams.