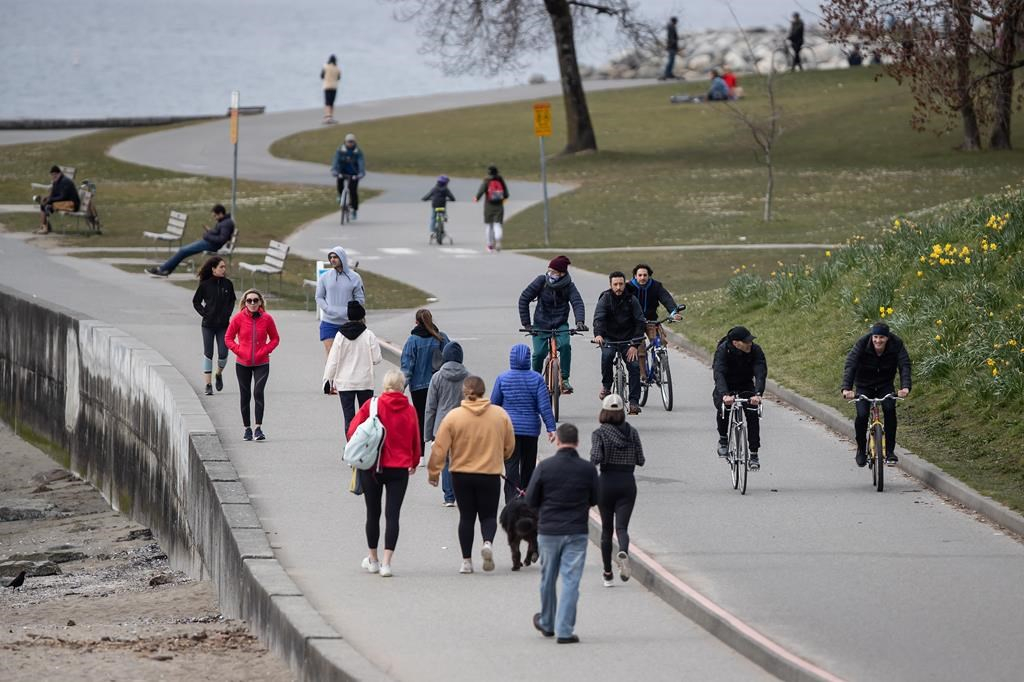 People walk and cycle on the seawall between English Bay and Sunset Beach, in Vancouver, on Sunday, March 22, 2020. Photo by The Canadian Press/Darryl Dyck
Previous story
Next story

Trudeau said across the country, people need to realize that ignoring social and physical distancing protocols is putting others at risk, from the elderly to the essential workers.

"This is what we all need to be doing and we're going to make sure it happens."

How exactly the federal government will or could make sure it happens has been the subject of debate for days, and will likely be a large part of a scheduled call later Monday between Trudeau and the premiers of the provinces and territories.

Many provinces have implemented states of emergency, which among other things, give authorities latitude to impose fines or other penalties on those who violate quarantine orders.

Trudeau has so far resisted the idea of putting into place the federal equivalent, the Emergencies Act, saying Monday that since it requires taking power out of the hands of the provinces, there needs to be a discussion with them first.

Trudeau said no provinces have asked yet for the Emergencies Act to go into force.

Deputy Prime Minister Chrystia Freeland said the call later Monday is aimed at getting the lay of the land, and a sense of where premiers have the tools they need and where they don't to stop the virus from spreading and responding to it.

But how that plays out on the ground is linked to the specific needs of a region, she said.

A decision to close a provincial border, for example, can be seen as linked to a sudden influx of returning travellers, where another province doesn't have that problem at all.

Nova Scotia imposed Monday new restrictions at its provincial boundary with New Brunswick, while Manitoba warned against non-essential travel out of their province.

"Each have their very individual requirements," Tam said of the provincial measures.

A federal requirement seems to be a need for better data.

The federal government announced a contract Monday with a Toronto-based firm Blue Dot, to use its analytics to support modelling and monitoring of the spread of COVID-19.

The provinces have also been asked to increase and harmonize the data they collect, said Health Minister Patty Hajdu, adding she hopes it is also an issue Trudeau will raise with the premiers later Monday.

Another issue on the table will be medical supplies. Hajdu said co-ordination is needed to ensure regions are prepared for what might lie ahead but also for what they are facing now.

"We're going to have to balance both of those," she said.

Trudeau also announced that Canada is spending $192 million on developing and producing vaccines for the novel coronavirus.

He said being prepared to mass-produce a vaccine, no matter who creates it, will be essential for suppressing COVID-19 in Canada in the long run.

As of mid-day Monday, there were 1,563 confirmed and presumptive COVID-19 cases in Canada.