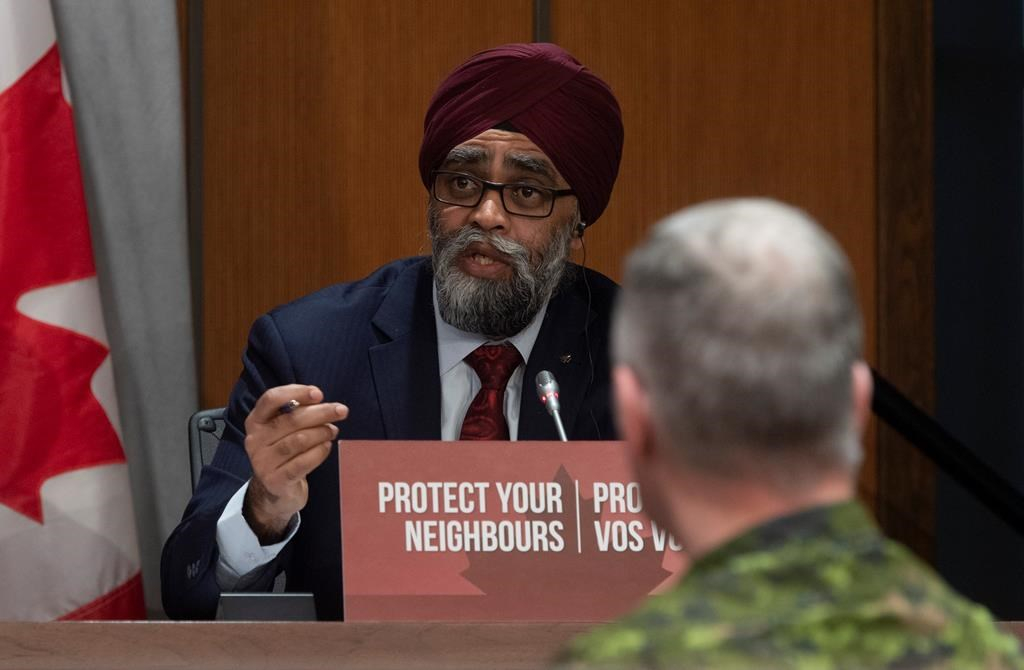 The crews of two Royal Canadian Navy vessels were ordered to sequester in a Halifax hotel for two weeks as the federal government announced Monday that it is ready to mobilize up to 24,000 Canadian troops at the drop of a hat to help with the COVID-19 pandemic.

Rear-Admiral Craig Baines, commander of Maritime Atlantic Forces, ordered sailors from HMCS Ville de Quebec and HMCS Moncton as well as the crew of a maritime helicopter detachment to sequester to ensure they are clear of the respiratory illness.

Efforts are underway to find an appropriate hotel, Baines said in a letter to sailors and their families, adding the sequestration won't begin until April. After two weeks, the vessels and helicopter will head out to sea where they will be ready to respond to a domestic emergency as needed.

"This option gives us the best chance of avoiding a community spread within one of the ships should someone have contracted the virus at the last minute due to natural family interactions," he said in his letter.

"I recognize this decision will be very challenging for our sailors and their families. In many ways, it will be like they have left on deployment, while in reality they will be very close by."

The U.S. Navy has seen COVID-19 infections on two of its nuclear-powered aircraft carriers over the past week, where close quarters have allowed the illness to spread like wildfire among the crew.

Baines could not say how long the Ville de Quebec and Moncton would remain at sea, suggesting it would largely depend on the pandemic.

The sequestration order came as the federal government promised the military is ready to respond should a formal request for assistance come from a province, territory or municipality, whether it is to help with COVID-19 or a natural disaster such as a flood.

"To date, the federal government has received no requests for action from the provinces or territories," Prime Minister Justin Trudeau said in French during the daily news conference outside his Ottawa home on Monday.

"If that were to change, the Armed Forces would be ready to answer the call as they have done throughout our history, whether it is to transport medical equipment or protect your homes during the flood or forest-fire season. Those who wear the uniform will be there for you."

Defence Minister Harjit Sajjan later revealed Ottawa is ready to mobilize up to 24,000 Canadian troops to help deal with the COVID-19 pandemic. That represents about a quarter of the entire force and would be one of the largest peacetime mobilizations in Canadian history.

Those on standby include 10 Canadian Army units as well as Navy ships and Air Force aircraft and crew. Reservists and Canadian Rangers are also being put on notice, Sajjan said, with the Rangers ready to conduct patrols to northern and Indigenous communities.

"These flexible teams are capable of operating as local response forces to assist with humanitarian support, wellness checks, natural disaster response and other tasks as required," said Sajjan, adding requests for assistance will be prioritized based on need.

The minister added that the government has been in touch with some remote communities to assess their needs. The military has in recent years provided assistance, including evacuations due to flooding and forest fires, to Indigenous communities and others in the north.

Vance last week essentially put all Canadian military personnel on a war footing by telling them to stay healthy and be ready to respond. He also asked members who were in the process of voluntarily leaving the Forces to reconsider and encouraged veterans to rejoin.

Meanwhile, military commanders have been working to be ready to help with COVID-19 at the same time as they could also be asked to respond to natural disasters, with many communities across Canada having experienced extreme springtime flooding over the past few years.

Yet the force is also being asked to maintain its presence in several overseas missions while guarding against any potential attack.

The federal government is looking at all its overseas missions and making adjustments where needed, Sajjan said. It is also working closely with its allies and "looking at any adversaries that might take advantage of the situation."