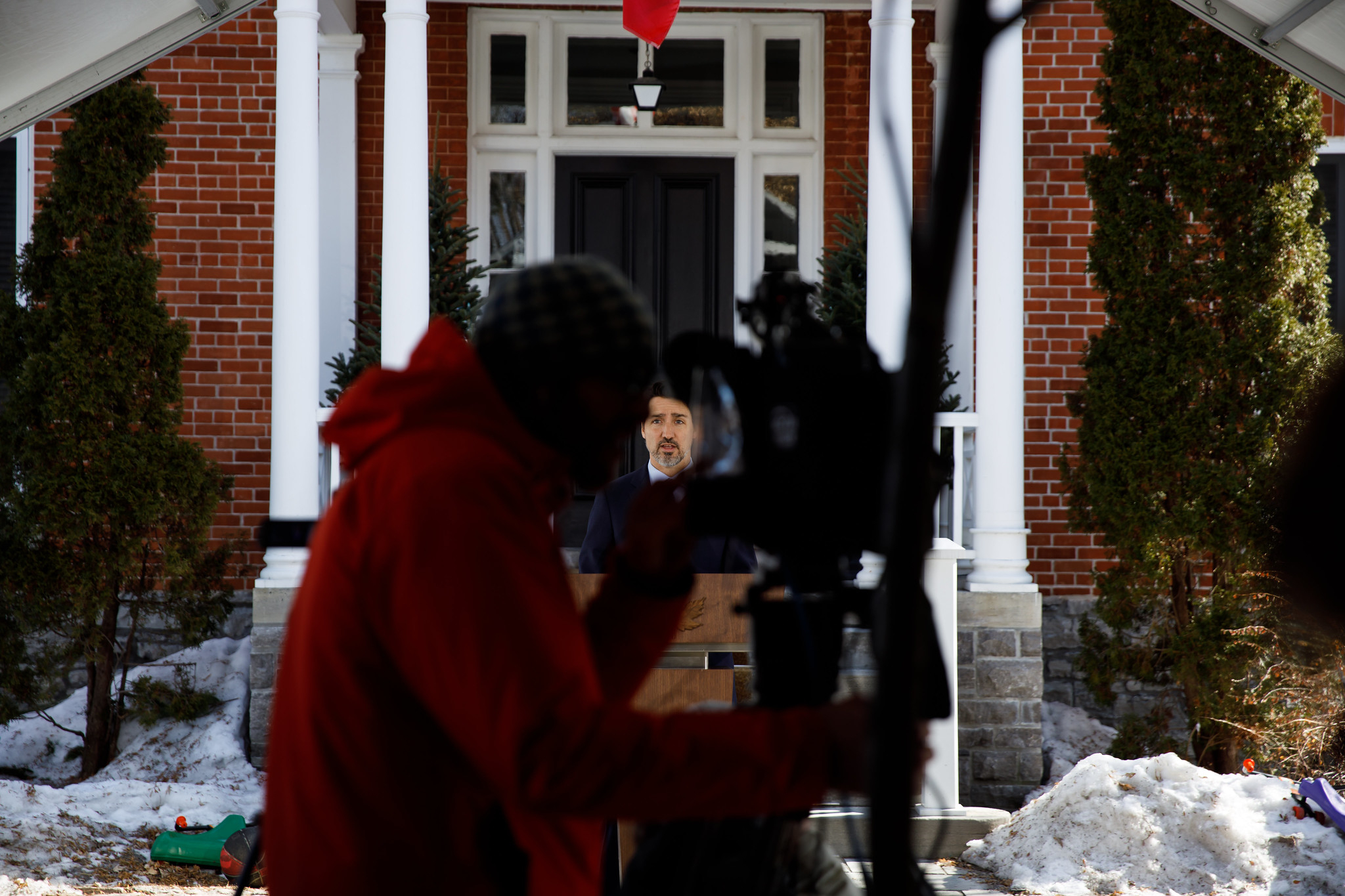 The federal price on pollution isn’t going anywhere during the COVID-19 crisis, says Canada’s prime minister, because fighting climate change remains a priority even during a pandemic.

Prime Minister Justin Trudeau also said he will have more information soon about the Trans Mountain pipeline, as fears are raised in B.C. of possible transmission of the coronavirus through resource project work camps.

Trudeau said Monday his government’s price on carbon pollution was “designed to put more money in household pockets,” while Canada continues to “fight pollution and protect our planet.”

“That is something we are going to continue to do,” Trudeau said from Rideau Cottage in Ottawa. “We know that we need to do things to make sure that we’re both supporting families, through ordinary times and through difficult times, and moving forward on continuing the fight against climate change — which remains, even at a time of immediate crisis and pandemic.”

The federal carbon tax will increase on April 1 to $30 per tonne of carbon dioxide equivalent (CO2e) in provinces that don't have their own carbon pricing systems. Those provinces are Manitoba, New Brunswick, Ontario and Saskatchewan and Alberta.

Trudeau’s comments come a week after B.C. Premier John Horgan delayed a scheduled increase to the provincial system from $40 to $45 per tonne of CO2e. The delay was announced during the rollout of the provincial government’s coronavirus aid package.

British Columbia and other provinces have ordered a wide range of businesses to close, to comply with public health guidelines surrounding the COVID-19 pandemic. Trudeau has asked Canadians to stay home and avoid crowds. Nearly a million people have filed for employment insurance.

The Canadian Taxpayers Federation and the Western Canadian Wheat Growers Association had called for a delay to the planned carbon pricing increase. Canadians didn’t need “higher taxes driving up the costs they still face” during this “unprecedented global crisis,” the federation argued in a statement Monday.

The government says it does not collect any direct proceeds from the federal carbon pricing system. Parliament’s budget watchdog confirmed in February that most households do get more money back in federal tax rebates than they pay through the carbon pricing regime.

Parliament has also authorized a $107 billion COVID-19 aid package to battle the ongoing economic drag caused by the coronavirus, and the federal government continues to roll out programs such as the recently announced $25 billion Canada Emergency Business Account, offering government-backed business loans.

The federal price on pollution isn’t going anywhere during the COVID-19 crisis, says Canada’s prime minister, because fighting climate change remains a priority even during a pandemic.

Greens and B.C. Indigenous leaders have also expressed concerns about the continued construction of two key fossil fuel pipeline projects in Canada: the expansion of the government-owned Trans Mountain oil pipeline from Alberta to B.C., and the construction of the Coastal GasLink pipeline in B.C.

The Green Party of Canada has called for a review of work practices on the Trans Mountain pipeline, as well as Coastal GasLink, LNG Canada and Site C.

The party said flying workers in and out and housing them in compact work camps “could be seriously jeopardizing their own health, as well as the health of nearby Indigenous populations.”

Trudeau was asked Monday about whether he would halt work on the Trans Mountain pipeline, given that there were Indigenous communities who feared the transmission of the virus through work camps.

“That’s a very good question,” said Trudeau. “A number of decisions are being made across Canada about who is an essential worker, who is not, and what work can continue during this time, and what work should not. I'm going to follow up on that to get a better answer tomorrow.”

Earlier Monday, the Union of BC Indian Chiefs (UBCIC) had asked for the Coastal GasLink pipeline project to be paused in order to protect the public’s health from COVID-19.

Grand Chief Stewart Phillip, Chief Don Tom and Kukpi7 Judy Wilson said in an open letter to Trudeau, Horgan, and provincial and federal health ministers that the risks posed by continued work on Coastal GasLink “are ones that were not consented to.”

Construction sites in B.C. can continue to operate with restrictions, the provincial government has said, even during social, or physical distancing measures enacted due to the pandemic.

Coastal GasLink said March 16 that there had been “no confirmed COVID-19 cases of any individuals working on the Coastal GasLink project.” It also said it had implemented new safety measures to slow the spread of the virus, like postponing events, limiting onsite workers and encouraging remote work.

According to a report in The Narwhal, Coastal GasLink has also indicated it had reduced its workforce from 1,200 to 400, while BC Hydro said it had cut 700 workers from Site C.

Editor's note: This story was updated on March 31, 2020 at 4:58 p.m. Eastern to correct that Alberta does not have an equivalency agreement with the federal government as previously stated. While there is an agreement in place, it only accepts Alberta's heavy emitters plan and does not cover the carbon levy.

waiting to hear whether

waiting to hear whether Trudeau Horgan Ford (forget Kkkenney) will fall on their swords for Big Oil and Gas has been like an ominous drone in the back of my emotional landscape since early March.
This will be their "to be or not to be" moments in their long term legacy IMO.
They will seize the opportunity of near-death economics for gas and tar as a pivot point for radically changing how the government regulates and supports fossil. ie. strings attached to money that stipulate money to workers only for clean up, vented gas capping, tech to extract hydrogen instead of gas or oil etc etc Make work projects : billions for well clean up, tar pond cleanup, first nations green tech installations of wind, solar, hydroponic greenhouses, ultraviolet water treatment, composting systems for houses instead of inground sewers etc etc. SO MANY solutions in search of $$$$ and personnel.
OR they can continue down the path of planet killing corporate welfare.

I wait with held breathe and don't know how I will not go mad if they choose the latter.

I HATE being ahead of the inevitable in my mind.

Canadian Tax Federation hates taxes almost as much as they love government handouts to business.

Indeed they should not cancel

Indeed they should not cancel the increase; they should make it bigger. Now that gas prices are so low, there's plenty of room. Before the crisis, I was seeing gas prices of about 1.20/litre. Now it's at .88.