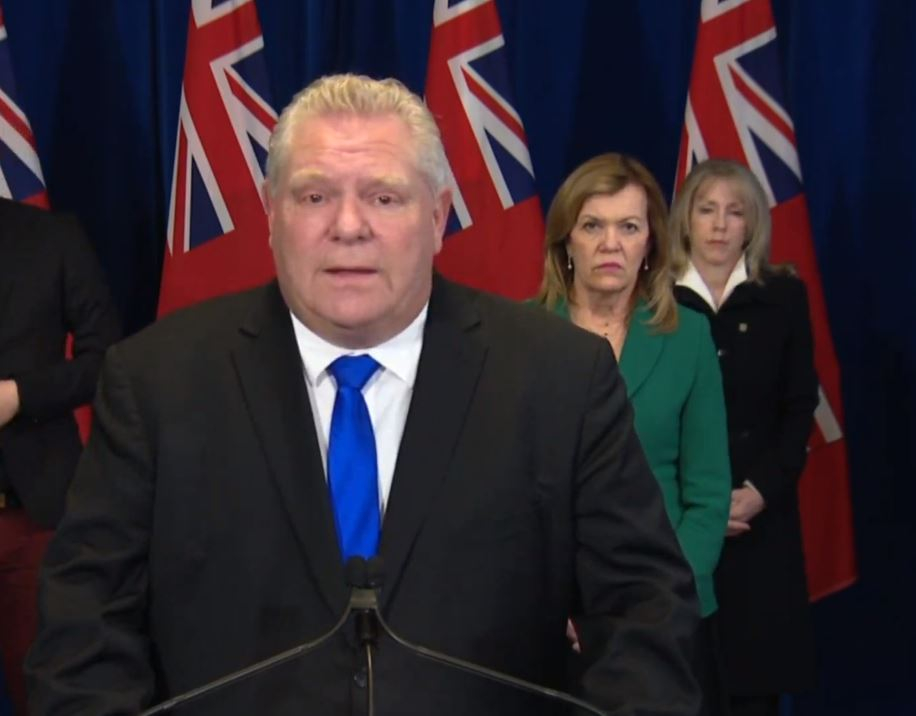 Ontario's ability to give front-line medical workers crucial equipment will be "severely challenged" if there's a "massive surge" of COVID-19 cases in the next two weeks, Premier Doug Ford said Monday.

Last week, Health Minister Christine Elliott denied reports of equipment shortages on the front line of the pandemic. But speaking to reporters by teleconference, Ford repeated pleas for residents to stay home as much as possible, saying that limiting the spread of the novel coronavirus would buy the province more time to get crucial personal protective equipment (PPE) for medical workers.

"The hard truth is, the more time we have, the more lives we can save," said a visibly grim Ford, flanked by Elliott and Dr. Merrilee Fullerton, Minister of Long-Term Care.

Ford said officials are working day and night to procure more medical supplies, even as shortages hamper pandemic response efforts worldwide. Some Ontario manufacturers are now repurposing their equipment to make PPE, and "millions" of pieces are expected soon, he said.

Ford also left the door open for further restrictions on public freedoms in Ontario to limit the spread of the novel coronavirus: "I'm not afraid to pull the trigger on that," he said.

The province will follow the advice of Ontario's Chief Medical Officer of Health, Dr. David Williams, Ford said. Minutes earlier, Dr. Williams said in a press release that he'd "strongly recommend" the public not leave their homes except for essentials. (Groceries, medications, medical care and dog-walking would be OK, Dr. Williams said.)

Meanwhile, Ontario recorded its highest spike in new COVID-19 cases Monday: 351, bringing the province's total to 1,706. Fatal cases also appear to be accelerating — Associate Medical Officer of Health Dr. Barbara Yaffe announced 10 more deaths from the virus, as opposed to four new deaths on Sunday (in total, 33 people in Ontario have died from COVID-19). Another 431 people have recovered.

Ford announced the province would give $10 million to businesses, non-profits and volunteers who are helping deliver meals, medications and other necessities to seniors. They need an "iron ring of protection," he said.

Anyone over the age of 70 and all people with underlying health conditions should stay home and self-isolate, Ford said. Elderly people are particularly vulnerable to COVID-19, and seven deaths have been recorded at the Pinecrest Nursing Home in Bobcaygeon, Ont., about a two-hour drive northeast of Toronto, since last Wednesday.

Since Ontario's first case of COVID-19 was identified in January, the province has publicly posted data on how many people have been infected with the virus. On Monday, it changed the format of that data, giving more information on demographic data and trends.

"The hard truth is, the more time we have, the more lives we can save," said a visibly grim Premier Doug Ford. #onpoli

For a few hours, the province removed data about how many people are waiting for the results of a COVID-19 test. That data is crucial because for weeks, Ontario has been struggling to clear a backlog of tests that has held health officials back from knowing how many people have the virus. The category was added back in by Monday evening.

On Friday, with nearly 11,000 people waiting for test results, the provincial government said it was expanding testing capacity and hoping to clear the logjam by early this week.

That queue appeared to have been nearly cut in half but not entirely cleared Monday afternoon — 5,651 people are waiting for test results. Some of Monday's jump in cases was due to those tests being processed, Dr. Williams said.

The province has also shifted to doing one update per day on cases instead of two.

Editor's Note: This story was updated at 5:25 p.m. to include more information from Ontario health officials and again at 5:50 p.m. to include that testing backlog data had returned to the Ontario government website.

Boom! Out of the park! (See

Boom! Out of the park! (See my comment under yesterday's disgraceful CP puff piece on what a great job Ford's been doing). Emma Mac for Editor in Chief!