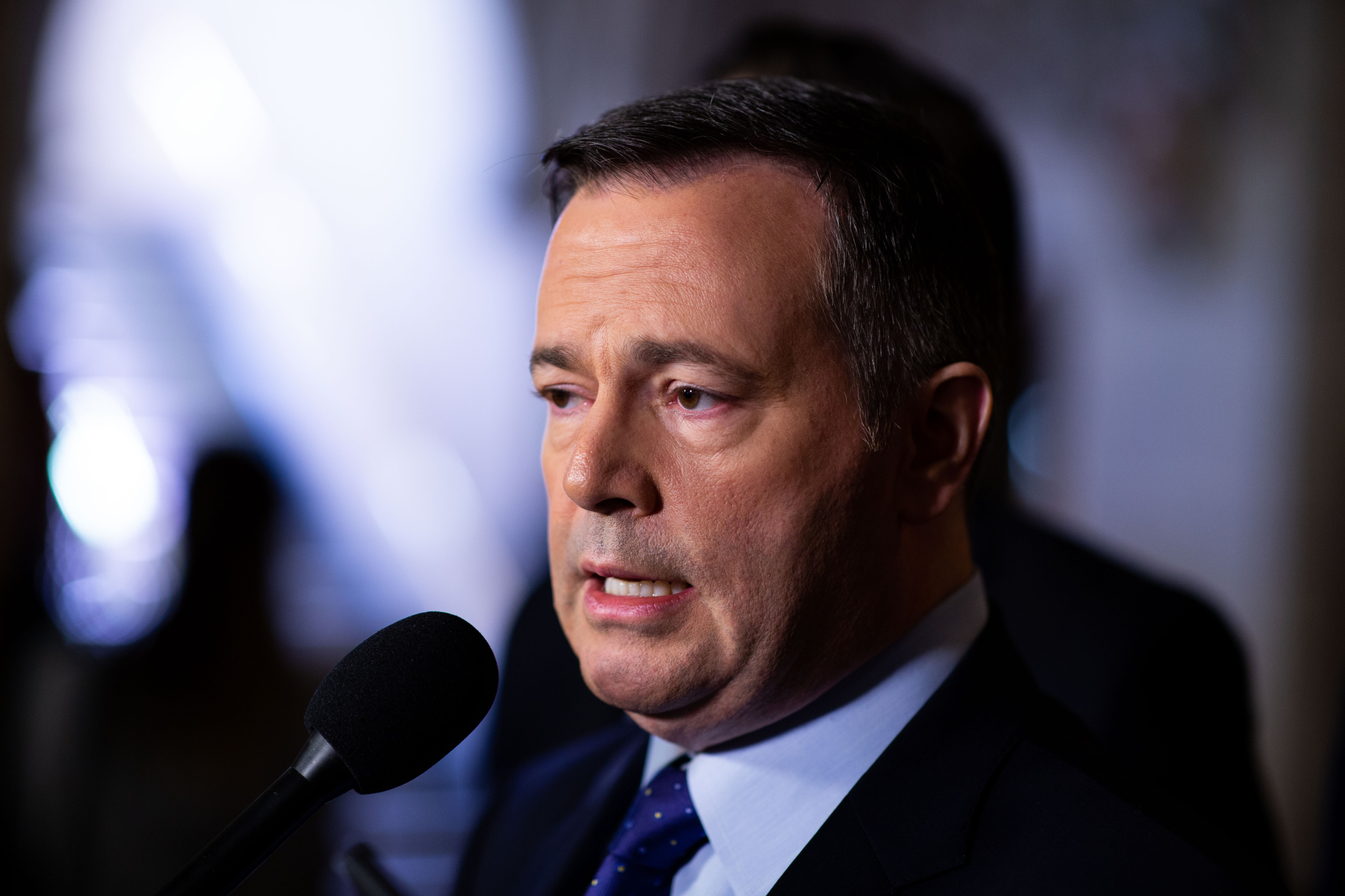 Alberta Premier Jason Kenney, shown here in 2018, said Tuesday that COVID-19 may be the province's greatest challenge in a generation. File photo by Alex Tétreault
Previous story
Next story

Crude prices could go negative, meaning "we will have to pay (buyers) to take it away," Kenney said. And Alberta's deficit is expected to triple from $7 billion to nearly $20 billion, derailing the premier's plans to balance the budget. All this while the province battles a virus that officials expect could kill between 400 and 3,100 Albertans by the end of summer, Kenney said.

"I will not sugarcoat it," Kenney said in a televised address to Albertans. "You need to know what we are up against."

By some measures, Alberta hasn't been as hard-hit by the novel coronavirus as Ontario and British Columbia — the rate of Albertans who have been hospitalized due to COVID-19 is lower, Kenney said. As of Tuesday night, 1,373 Albertans have tested positive, with 42 in hospital and 26 deaths.

Economically, however, Alberta can expect to be hurt more by the economic shutdown caused by the virus, Kenney said. Its recovery will also be slower.

Since early March, Saudi Arabia and Russia have been flooding the market with excess oil and gas, causing a global crash in energy prices that was worsened when the pandemic caused a drop in demand. At one point last month, Canadian crude cost about US$3 per barrel, less than a Big Mac. Oilpatch companies, already hammered for the last few years by a previous crude price plunge, are now awaiting details of a federal bailout.

"I cannot overstate how grave the implications of this will be for jobs, the economy and the financial security of Albertans," Kenney said.

The pandemic, and actions taken to address it by the Alberta government, have forced many businesses in the province to temporarily shutter. Kenney said he knows Albertans are "under huge financial stress," and want physical distancing measures to end so life can return to normal. But the province's projections show the orders will have to remain in place at least for the month of April, perhaps until the end of May.

"We simply cannot let the virus loose in Alberta," he said. "That would create a public health catastrophe, which would force an even more stringent lockdown in the future, leaving our economy even further battered."

Earlier Tuesday, Kenney warned that unemployment in Alberta could skyrocket to 25 per cent, speaking to an online energy conference. He did not repeat that statistic in his speech to Albertans, but pointed to his government's recent investment of $1.5 billion in TC Energy's Keystone XL pipeline as proof that the government is "taking control of our economic destiny."

Crude prices could go negative while Alberta's deficit is expected to triple. All this while the province battles a virus that officials expect could kill between 400 and 3,100 Albertans by the end of summer.

"We will do more, including a huge new investment in job-creating infrastructure projects," he said.

First projections of how hard virus could hit Alberta

On Tuesday night, Kenney released the first public projections of how much Alberta could be affected by COVID-19. Though the modelling by public health officials shows the province is faring better than hard-hit countries like Italy and the United States, Alberta isn't out of the woods yet, the Premier said.

Kenney divulged two scenarios: a probable one, and another that's considerably more serious. Under the probable scenario, 800,000 Albertans could be infected with COVID-19 from the beginning of the outbreak to the end of summer, with anywhere between 400 and 3,100 people projected to die and infections peaking in mid-May. In the other scenario, which Kenney said he hopes to avoid, infections peak later, about 1 million people are infected and between 500 and 6,600 people die from the virus.

If not for the measures the province has already taken — shutting down non-essential businesses, asking people to remain home, etc. — Kenney said the numbers could be far worse. In that worst-case reality, 1.6 million could have been infected and 32,000 killed.

"These numbers can be overwhelming, but these models are not a done deal," Kenney said. "I want Albertans to see them as a challenge. Maybe the greatest challenge of our generation."

Kenney said the province would release more detailed projections Wednesday, along with details of a $500-million boost to healthcare funding. The Premier's United Conservative government has come under fire in recent weeks for previous cuts to health care and doctor pay.

Editor's Note: This story was updated at 9:28 p.m. to include additional details from Kenney's speech.

No money from federal coffers

No money from federal coffers unless written and clearly going to mitigation projects for tar pond leakage into water table and rivers flowing north of Ft Mac, orphan wells, capping vented gas, transition training to geothermal drilling etc. these kind of projects will benefit all Canadians in the long run and help ALBERTAR start thinking past its horse and buggy wild west culture.
NO MONEY FOR TEXAS OIL BARONS

'"we will have to pay (buyers

'"we will have to pay (buyers) to take it away," Kenney said.' This would only sound half as crazy if the buyers didn't leave a huge mess behind as well. Alberta politics must be a huge joke among corporate lawyers, but it is a tragedy for the people and ecology.