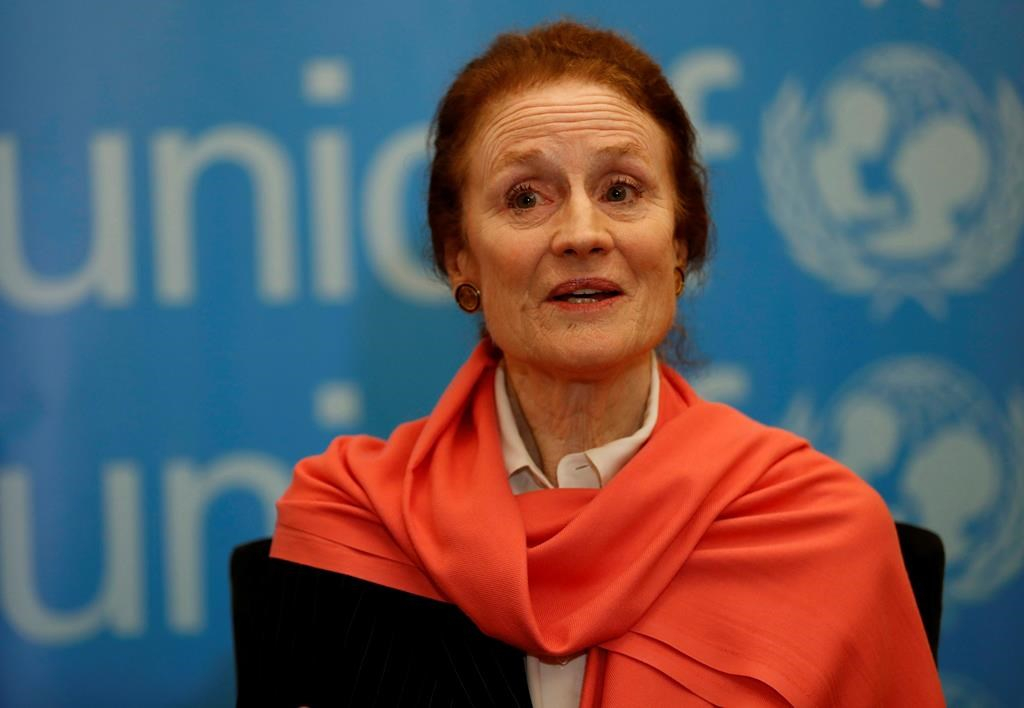 Henrietta Fore, executive director of UNICEF, speaks during an interview with the Associated Press, in Beirut, Lebanon, on Thursday, March 8, 2018. File photo by The Canadian Press/Hussein Malla
Previous story
Next story

The COVID-19 outbreak has sparked an increase in online child sexual predators that organizations, governments and parents need to take more seriously, says the head of the United Nations children's agency.

"We've got a couple of worrying signs, which is that the online predators are really — they're multiplying," Henrietta Fore, UNICEF's executive director, said in a wide-ranging interview with The Canadian Press this week.

With half the planet's children now out of school because of the pandemic, Fore said that has created new risks for kids who are now spending more time on the internet.

"Because children are online more, they are vulnerable. And often they haven't been taught about how to think about being online, how to have a video chat and what you do and do not do," she said.

UNICEF, she said, is talking with internet companies because there is a lot they can do to combat the problem.

"We're also talking to governments about what they can do. Can we take down sites? Can we screen with artificial intelligence on the videos?" she said.

Fore also called on governments to ban certain websites that are clearly being used by predators.

"But we also need to make sure we're getting good education out to our young people. They need to be able to protect themselves."

Fore encouraged parents to direct their children to UNICEF's interactive U-Report website — https://oneyouth.unicef.ca/en/u-report — which is free and confidential for young people aged 13 and up.

Fore said it is a work in progress keeping up on new online platforms that enable children and adults to talk in groups. She did not provide specific examples of new websites or services, but made clear: "We're looking at them, we're assessing them, we're talking to each and every one of the companies.

"We just hope that everyone realizes they have a responsibility for the children of this world, and it is to keep them safe and get them educated at the same time."

The new online threats are also being compounded by the rising instances of physical and sexual abuse that some children are now exposed to within their own homes because of shuttered schools and social distancing, said Fore.

The forced work-at-home environment is also hurting children, she said, and Fore put the onus squarely on employers to not allow that to happen.

UNICEF has now transformed itself to an international telework operation and Fore has told her staff that they are parents first, then teachers, then UNICEF employees — in that order.

"Many of us are working so hard, we have to have employers who understand this is a trying time. So, you may not get that report in on time because you simply have to talk to your child."

Before she was forced to work at home, Fore was in Syria last month along with her counterpart from the UN World Food Program. She and David Beasley visited Idlib, one of last remaining rebel areas, and held meetings with Syrian government officials, including Foreign Minister Walid al-Moallem.

They were trying to open more access and supply routes to get aid to the war-ravaged Syrian people.

Fore said the COVID-19 crisis is going to get worse in the world's most destitute places, including throughout Africa, and it is in the interest of developing countries such as Canada to contribute to international efforts to fight it.

"This COVID-19 hasn't really hit full strength there yet. But it's coming, and they're going to need help much more than us. It, in turn, will bring a second wave to us in the fall if we don't help them early on."

Fore also praised Canada's efforts as a leader in helping young girls and women in the developing world, including getting more of them into schools.

As well, Fore made a direct appeal to Canadians to support UNICEF's efforts to help children in poor countries who have no access to clean water, soap and other basic sanitary conditions.

She urged Canadians to make donations at: https://www.unicef.ca/en/what-we-do/coronavirus-covid-19.

This report by The Canadian Press was first published on April 8, 2020.