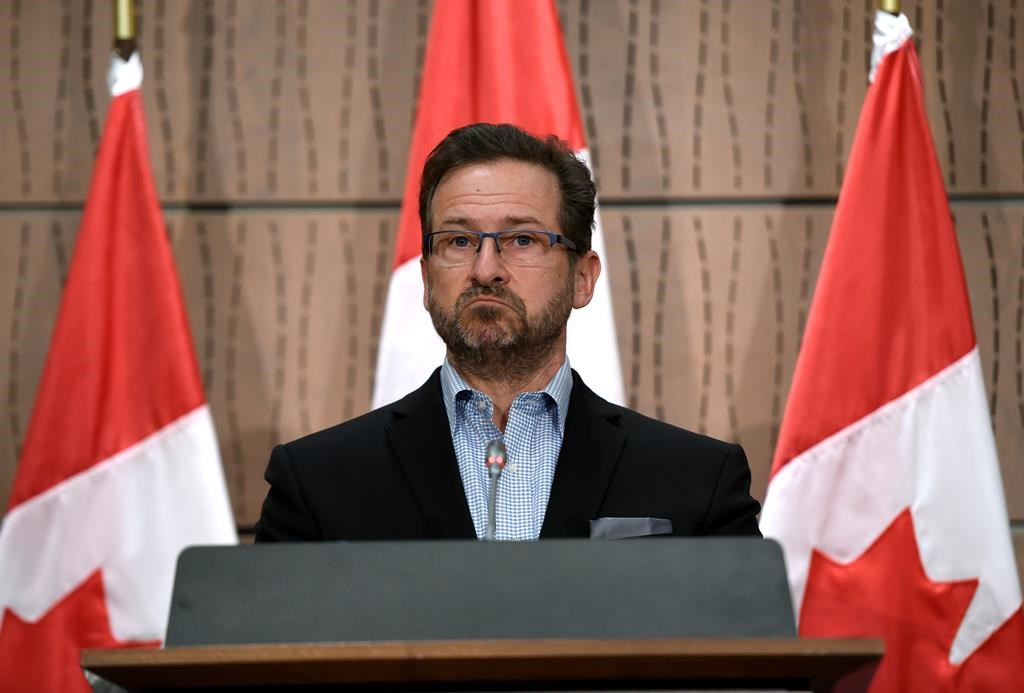 Bloc Quebecois Leader Yves-Francois Blanchet is raising concern about temporary foreign workers arriving in Canada to work on farms, saying he believes the quarantine rules for these workers are inadequate.

The federal government has exempted migrant workers from COVID-19 cross-border travel restrictions because of their importance to the Canadian economy.

Federal officials have said these workers will face health screening before travelling to Canada and must isolate for 14 days upon their arrival in Canada.

But Blanchet says more than 100 temporary farm workers arrived in Quebec this week from Mexico, and he is concerned they are not being tested for COVID-19 upon their arrival in Canada and that their mandatory quarantine will happen on the farms where they will work, rather than in federal facilities.

"We are concerned about their safety," Blanchet said in French.

"Before more temporary foreign workers arrive at Dorval airport in Montreal, can steps be taken so that these people are quarantined at customs before they are released to go elsewhere in the country in the interests of all Canadians?"

Blanchet charged that the federal government is passing the buck of responsibility of overseeing this quarantine period and placing it onto the shoulders of farm owners.

"That's not their duty, that is the state's duty," he said.

"It's possible the farms are not in a position to ensure the type of quarantine that's needed. It's possible that symptoms are not being identified as effectively on a farm as they could be if those tests were conducted by health authorities. These people have been released by Customs Canada and the responsibility to look after these people."

Deputy Prime Minister Chrystia Freeland said temporary foreign workers are essential for food production and food security in Canada, and stressed that all migrant workers are federally mandated to quarantine for 14 days upon arrival in Canada.

Freeland said the RCMP will be working with provincial and municipal police forces to help enforce the federal Quarantine Act and stressed that temporary foreign workers fall under the requirements of this act.

"This season is an essential moment for farmers to begin their work," Freeland said.

"Temporary foreign workers, like all people, Canadian non-Canadian alike, entering Canada from another country are subject to mandatory, 14-day quarantine. The RCMP has announced yesterday ... working with local police forces, (it) would be assisting public health in ensuring those quarantine measures, which are obligatory, are fully enforced."

It is critical for Canada's food supply chain to be maintained and temporary foreign workers play an integral role in that food supply, said Prime Minister Justin Trudeau during a lengthy and wide-raging question-and-answer period on government's COVID-19 emergency measures in the House of Commons Saturday.

"I share many of the concerns listed by (Blanchet)," Trudeau said in French.

"We will work together to make sure that while meeting the needs of our farmers and our food supply chain, we do have the capacity and the certainty that Canadians are kept safe and that the possible spread of COVID-19 is limited."

Two weeks ago, the Canadian Federation of Agriculture praised the federal government for ensuring that COVID-19 travel restrictions would not prevent migrant workers from entering Canada as the planting season is set to begin.

Federation president Mary Robinson said farmers are committed to working with all the appropriate agencies and departments to ensure the entry of these workers into Canada follows strict public health protocols to prevent further spread of COVID-19.

But Chris Ramsaroop of Justice for Migrant Workers says he does not have confidence that temporary foreign farm workers will be housed in ways that protect them from a possible outbreak.

He says he's visited work sites where workers were housed in "bunk houses" that would not allow for proper social distancing.

"If a pandemic spreads, it's going to spread very quickly in a bunk house or a work site," he said.

"We know from what migrant workers are telling us that there aren't social distancing on the farms that they're currently living on or in their working conditions."

His group questions how the federal government can continue to claim to protect Canada's food security while possibly sacrificing the health and well being of migrant workers who work to feed Canadian communities.

"I think the federal government has failed in the past to protect the interests of migrant workers in normal circumstances, so what's going to happen in a crisis?" Ramsaroop said.

He suggested migrant workers should be housed in hotel rooms for the duration of their mandatory quarantine.

This report by The Canadian Press was first published April 11, 2020

He is right. This is the

He is right. This is the responsibility of the state and should not be turned over to farmers. However, a detailed plan can be developed for each of these people, and documented, and followed upon, as is the case in British Columbia with all persons entering from the US or any other country now.