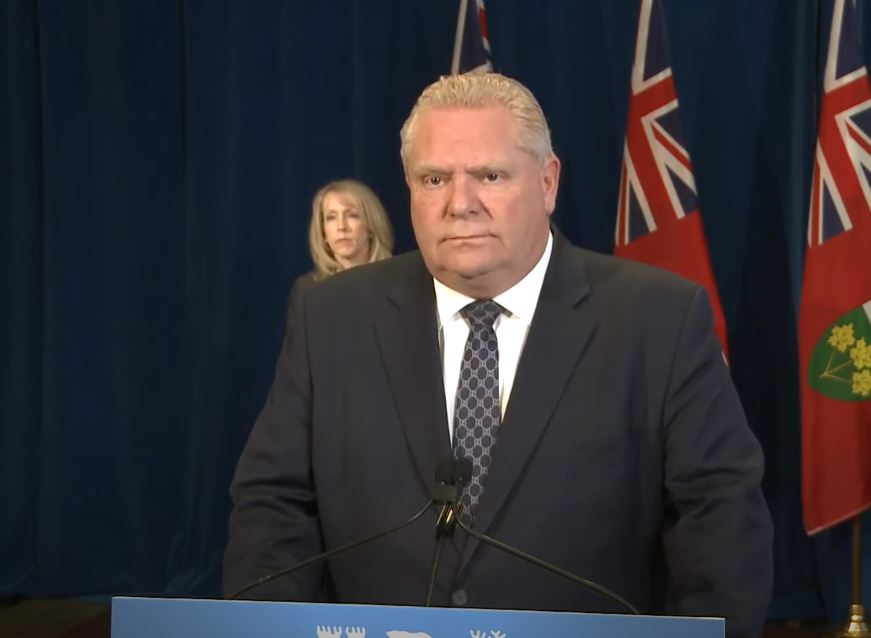 Ford pledged to deploy “COVID-19 SWAT teams” of hospital workers and infectious disease experts, and to ramp up testing for the coronavirus in long-term care homes where the deadly virus has spread like wildfire. But the premier also pushed back against criticism that his government had been slow to act.

"​​My heart breaks for these people," Ford said. "We’ve done quite a bit, right from the get-go."

Central to the premier's plans for long-term care is a new emergency order enacted Tuesday night to bar employees, who often work part-time hours at multiple facilities to make ends meet, from working at more than one site during the pandemic. The move is meant to stop COVID-19 spreading between homes, and applies to support staff as well as medical workers.

But the order itself has several loopholes, not taking effect until April 22 and exempting staff from temp agencies, who make up a significant portion of the long-term care workforce. It also ends after two weeks.

British Columbia made a similar order weeks ago. In response to questions about whether Ontario could have saved more lives if it had taken Wednesday's actions sooner, Ontario chief medical officer Dr. David Williams said he didn't have "evidence" to show the delay had caused more deaths.

The Progressive Conservative government's plan included enhanced testing. It will now screen all symptomatic staff and residents, and asymptomatic close contacts of people with COVID-19. Though asymptomatic in "select homes" will also be tested, the government will not begin testing every single resident and employee.

Facilities that need personal protective equipment for workers will get it within 24 hours, Ford pledged.

Although Ford previously said the plan would include wage top-ups for workers whose hours would be cut by the change, he said Wednesday that the measure would be worked out with the federal government.

"The government encourages long-term care employers to offer full-time hours to their part-time employees during the COVID-19 outbreak," the province said in a press release.

Ford and Long-term Care Minister Merrilee Fullerton didn't give details on how many "SWAT teams" would be created, and how many facilities they would service.

There have been 145 COVID-19 deaths in the province's long-term care facilities, Williams said Wednesday. And seniors are particularly vulnerable to the virus — about 40 per cent of cases in the province are people aged 60 and older.

The Pinecrest Nursing Home in Bobcaygeon, Ont., reported its first two deaths from the virus on March 26, sweeping the issue of COVID-19 in long-term care homes into public consciousness. Nearly half of the facility's residents have died. Since then, the virus has ravaged more facilities, with over 100 in the province reporting outbreaks.

Critics have sounded the alarm over long-term care in Ontario for years, with medical workers’ associations and unions calling for fixes to chronic understaffing issues in long-term care homes. The problem hit the spotlight in 2019, after of an inquiry prompted by the case of serial killer Elizabeth Wettlaufer, a long-term care nurse who was convicted of murdering eight elderly patients.

Fullerton said the government was aware of the problem and had been working on it: "Unfortunately, a pandemic has arrived."

In a statement Wednesday, the Ontario Nurses' Association (ONA) said the conditions nurses in such facilities are working under are "unfathomable."

Horwath has previously said long-term care in the province was a "disaster waiting to happen," and had been underfunded for a decade.

On Wednesday, CBC News reported the Ford government only conducted a handful of annual, unscheduled inspections of nursing homes last year. (The province continued conducting investigations done after complaints, but in those cases, the facility knows an inspector is coming.) Annual inspections have uncovered issues with neglect, sanitation and abuse inside homes, CBC reported.

Fullerton said the move was meant to ensure high-risk homes got focused attention, and that long-term care homes worldwide had struggled with COVID-19.

When asked if he thought the entire system in Ontario should be overhauled Wednesday, Ford said: "I think we have to." The premier also left open the possibility of an inquiry into his government's handling of the crisis.

'COVID-19 is the cherry on top. Things were bad before.'

Across Canada, long-term care facilities have been plagued by COVID-19. At one home in Montreal, 31 residents died and staff left their posts as more fell ill from an outbreak of the virus. And 18 have died at the McKenzie Towne Continuing Care Centre in Calgary.

It's a terrifying time to have a family member in long-term care, said Laura Wenzel, 57. Her 86-year-old mother has been in a home in Vegreville, Alta., about an hour's drive from Edmonton, for about a decade.

Wenzel's mother has dementia and is unable to see. Wenzel, who had been visiting Vegreville when the pandemic hit, hasn't been able to see her since March 27, when the home stopped allowing visitors into long-term care to avoid spreading COVID-19. Phone calls or waving through windows aren't possible due to her mother's health conditions, Wenzel said.

"​​​​​​I was worried she would feel like I had abandoned her because I couldn’t say goodbye," she said. “Thankfully, she didn’t have a feeling of being abandoned because she didn’t know who I was anyway."

Though there hasn't been an outbreak at her mother's home yet, Wenzel said she's fearful it could happen soon, as many staff at the home come from Edmonton, which has been hit harder by the pandemic than Vegreville. Others work at multiple care facilities. She's also worried about a lack of communication from the managers of the already-understaffed facility, but said she has few options in the small Alberta town.

"My hands are tied," she said. "COVID-19 is the cherry on top. Things were bad before."

Wenzel said she hopes the pandemic shows governments the danger of privately run care homes, also a feature of Ontario's system. Businesses can service patients or their shareholders, but they can't do both, she added.

"What do you want for yourself when you’re that age?" she said. "Is this the system you want?"

Editor's Note: This story was updated at 11:12 a.m. to correct a photo caption and the date that the Vegreville long-term care facility stopped accepting visitors.

So it looks as if former

So it looks as if former premier Mike Harris (how long has he been lobbying, very successfully, to reduce the number of inspections?) — which should NEVER be announced beforehand — needs to bear some responsibility here. He and others like him have been working hard to increase their shareholder profits, resulting in elders sitting in soiled diapers/bedding for days. How morally bankrupt can one get?