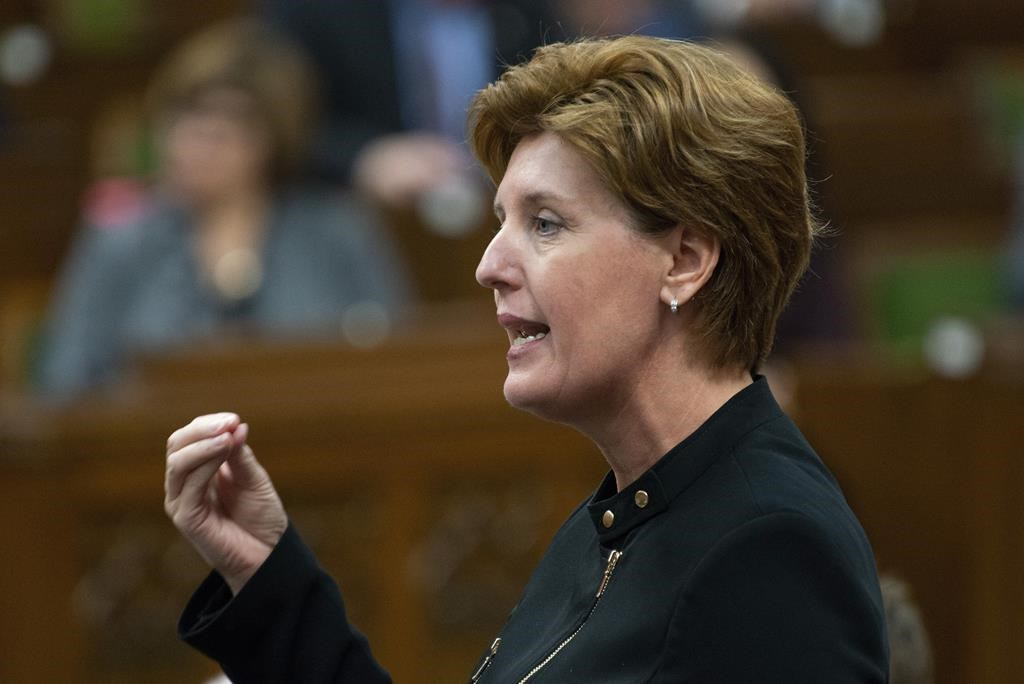 Agriculture Minister Marie-Claude Bibeau responds to a question during Question Period in the House of Commons, on Monday, April 29, 2019 in Ottawa. File photo by The Canadian Press/Adrian Wyld
Previous story

Higher prices and less variety on store shelves is a possibility as the agriculture industry confronts a wide range of challenges created by COVID-19, the federal agriculture minister said Wednesday.

But everything from a potential labour shortage on farms to COVID-19 outbreaks among workers at food processing plants will have an impact, she said.

"I think our system is strong enough and resilient enough that it will adapt, but these days it is particularly challenging," Bibeau said during a video news conference Wednesday, where she fielded questions from her home in Sherbrooke, Que.

"I do not worry that we will not have enough food," she added.

"But we might see some differences in the variety and, hopefully not, but maybe in the prices as well."

The federal government has announced millions in new spending for farmers this week alone, including $20 million for the Canadian Food Inspection Agency so it can have enough inspectors on hand to carry out its work.

The funds are partially designed to guard against the potential for CFIA inspectors to be stricken with the virus and be unable to work, further slowing down an already struggling supply chain.

The other labour issue facing the industry is a farm worker shortage. Some 60,000 temporary foreign workers come to Canada annually to work on farms and in plants but border closures mean fewer are expected this year.

They are also required to quarantine for two weeks upon arrival, and this week, the federal government announced $1,500 per worker to help employers cover salary payments or revamp living quarters to ensure workers can abide by distancing protocols.

Checks on those measures will be carried out by local, provincial and federal authorities, Bibeau said.

Workers' rights group Justicia for Migrant Workers has raised concerns the onus is actually being placed on workers — not their employers — to comply.

They cite a video being produced by the Ontario Provincial Police telling workers in Spanish what their obligations are, and say there are already efforts by communities to "name and shame" migrant labourers.

"We find it disconcerting that local community members are so concerned about migrant workers' social distancing while in public, yet do not share the same concerns regarding the lack of protections and accommodations provided by the employer to ensure that migrant farm workers are able to socially distance in their workplace and home," they said in a statement Wednesday.

The arrival of temporary foreign workers is being stymied by global travel restrictions, and what's ordinarily an annual shortage of several thousand workers is likely to be made worse, Bibeau said.

The government is examining efforts to get unemployed or under-employed Canadians into jobs on farms, she said.

That's despite the fact that the very reason the temporary foreign worker program exists is due to Canadians not wanting those jobs — and farmers don't necessarily want to hire them either, as the work can require extensive training. Many workers return to the same area every year because they've developed a specific skill set.

"It's a challenge, but we have to do even more to encourage them to join the industry," Bibeau said of the workers the government hopes to recruit.

Another issue facing the sector is outbreaks in processing plants. An Olymel pork processing plant northeast of Montreal reopened this week after the spread of illness among its workers forced a two-week shutdown.

The Cargill Meat Solutions plant south of Calgary, which represents more than one-third of Canada's beef-processing capacity, announced this week it is idling its second shift of workers.

The union representing those staff said there have been 38 cases of COVID-19 at the plant in High River, Alta.

Bibeau said she is reviewing a pitch by the cattle industry to help weather the crisis. The Canadian Cattlemen's Association wants a federally co-ordinated "set-aside" program that would enable producers to keep their animals longer.

The program would slow down the supply chain because there's not enough processing capacity, the group has said.

The Conservatives called Wednesday for Bibeau to immediately implement that program and be far more transparent about what else the government is examining.

"Farmers, producers and processors work hard day and night to ensure that Canadians have the food they need while they stay home," three Conservative MPs who work on agriculture issues — John Barlow, Richard Lehoux and Lianne Rood — wrote in a letter to Bibeau.

"These hard-working Canadians need to know that their jobs will be safe during this pandemic and that they can continue to produce world class products."