COVID-19: Here's what the federal government is doing to address the pandemic 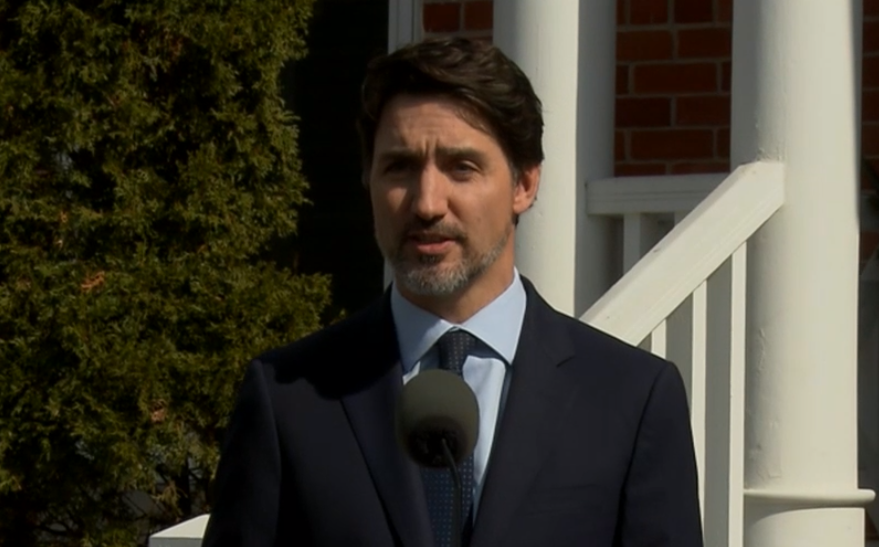 Prime Minister Justin Trudeau speaks to media from a distance outside Rideau Cottage on March 13, 2020. The Prime Minister will be in isolation there for two weeks after his wife was diagnosed with COVID-19, the novel coronavirus.
Previous story
Next story

The federal government unveiled a flurry of measures Friday aimed at helping the country weather the COVID-19 pandemic.

Some were aimed at helping Canadians and businesses financially as the global health emergency worsens. In other announcements, the government urged Canadians to avoid international travel and social gatherings.

“I know that you’re worried,” said Prime Minister Justin Trudeau, addressing the nation from outside Rideau Cottage, the residence where he will be in isolation after his wife, Sophie Gregoire Trudeau, tested positive for the novel coronavirus.

“We are in the enviable position of having significant fiscal firepower available to support you.”

(Gregoire Trudeau’s symptoms are mild, and she is currently under quarantine. Trudeau is working from home ⁠— he and the couple’s three children are in isolation.)

Canada had more than 150 diagnosed cases of COVID-19 as of Friday morning, with one death reported in B.C., as more events continued to be delayed or cancelled.

Here’s a rundown of the measures the government announced today to address the growing health crisis.

Busy day ahead, working from home. Meetings with my cabinet, the country’s premiers, national Indigenous leaders, and more. Staying focused on you. Talk soon. pic.twitter.com/xhAuxscf6N

Help for those quarantined or in self-isolation coming soon

The federal government announced a flurry of measures aimed at helping workers and businesses Friday. It's also asking Canadians to avoid international travel and social gatherings. Here's what you need to know.

On Friday, Trudeau announced that the federal government will roll out a “significant fiscal stimulus package” in the days to come. The details of the funding haven’t been released, but the prime minister said it would be aimed at helping those who would be at financial risk if they had to stay home to isolate or quarantine.

“We need to make sure Canadians have the options and the ability to follow the best public health advice and keep themselves safe.”

Earlier in the week, Ottawa announced it would waive the one-week waiting period for EI sickness benefits for people in quarantine or self-isolation. (Experts have raised concerns about whether this measure will help enough people, Global News reported.)

The federal government also boosted funding to its work-sharing program, which can help fill out workers’ income when economic downturn forces their employer to cut hours.

More information about work-sharing and EI during coronavirus can be found here.

This week, private-sector economists began warning that Canada may be entering a recession due to the current uncertainty around coronavirus and a plunge in oil prices.

To help small- and medium-sized businesses keep running, Finance Minister Bill Morneau said $10 billion of emergency credit will be available through the Business Development Bank of Canada. (More information on how to access the funding can be found here.)

Bank of Canada Governor Stephen Poloz, who joined Morneau at the announcement, said he is cutting the key overnight lending rate by 50 basis points to 0.75 per cent ⁠— a move that essentially encourages banks to lower their lending rates, potentially boosting the economy.

To protect Canadians, I announced today measures to prevent the spread of COVID-19. This season, cruise ships will not be permitted to dock at Canadian ports from April 2 to July 1. In Northern and Arctic ports, the cruise ship season will be deferred for the entire season.

The border is open but don't leave the country, please

Unlike the United States government, which has restricted travel to Europe, Canada’s federal government hasn’t yet halted international travel. But the government did urge Canadians on Friday not to leave the country, and Trudeau wouldn’t rule out the possibility of travel bans.

“We’re also obviously looking at countries of origin and further measures that we can take,” he said. “We won’t close the door on any idea.”

Earlier in the day, federal Health Minister Patty Hajdu said strict border control measures haven’t worked in other countries. In Italy, for example, cases spiked after the country shut down its borders.

The federal government is also asking anyone who has returned from a foreign country to self-isolate for 14 days.

Trudeau said on Friday that the federal government is working on a plan to restrict international travel to certain Canadian airports. The move will allow the government to concentrate its screening efforts, which have also been increased.

Trudeau didn’t directly say whether Canadians should be travelling between cities and provinces.

“I think people need to make responsible decisions and check with their medical professionals and check their own travel plans in terms of what makes sense for them,” he said.

Transport Minister Marc Garneau announced Friday that all cruise ships with more than 500 passengers won’t be allowed to dock at Canadian ports until July 1. Cruises have been a major source of infection, with outbreaks affecting hundreds of passengers ⁠— including some Canadians ⁠— on various vessels worldwide.

All measures promoting #SocialDistancing should be implemented to #FlattenTheCurve of exposure. We support @CPHO_Canada's advisory against all non-essential travel outside of 🇨🇦 to limit the spread of #COVID19.

So far, the federal government has avoided bringing in hard bans on large gatherings (though many provinces have introduced local bans or guidelines). But Dr. Theresa Tam, Canada’s chief public health officer, told Canadians Friday that now is the time to cancel events and avoid public spaces.

“Now is the time for organizers to be cancelling, postponing or modifying events where many people gather,” Tam said.