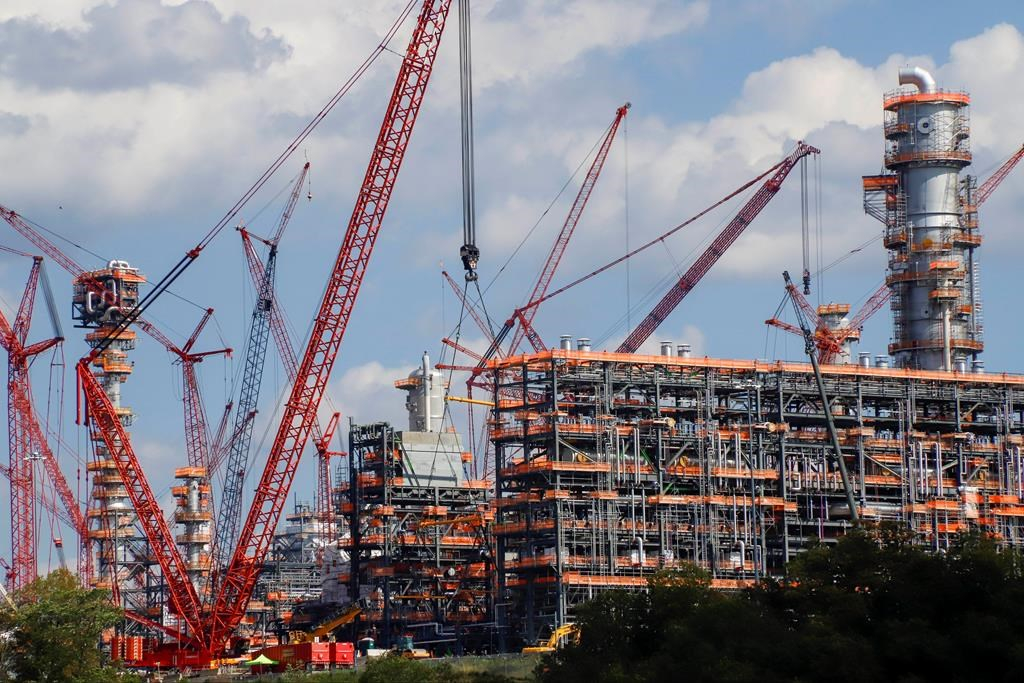 This file photo from Oct. 3, 2019 shows cranes as they work on construction of the Shell Pennsylvania Petrochemicals Complex and ethylene cracker plant located in Potter Township, Pa. File photo by The Associated Press/Keith Srakocic
Previous story
Next story

Energy company Royal Dutch Shell told investors Thursday that it aims to stop adding greenhouse gases to the atmosphere by 2050, a move that was welcomed by some climate campaigners even as others called it “corporate greenwash.”

The British-Dutch oil and gas giant said in a statement that it wants to achieve “net zero” emissions from production by mid-century “at the latest.”

Emissions of carbon dioxide and methane from the extraction, refining and burning of fossil fuels are one of the main drivers of man-made global warming.

A group of institutional investors known as Climate Action 100+ welcomed the announcement, which follows a similar move by rival BP in February. The group, which includes over 450 investors managing more than $40 trillion in assets, said Shell’s commitment “is of significance for the broader energy sector.”

But some environmentalists dismissed Shell's announcement as a public relations stunt, noting that the notion of “net zero” would allow the company to keep pumping out greenhouse gases by claiming to offset them with measures to capture emissions.

“They hope to keep their social license by trying to suck carbon from the air through vast tree plantations and storing emissions underground,” said Teresa Anderson, climate policy co-ordinator at ActionAid International. “The fact that the technology they are relying on does not yet work at scale, and that massive land grabs would be needed to fulfil their tree planting ambitions, should raise huge red flags."

“We mustn’t let corporate greenwash or the COVID-19 pandemic distract us from the real and urgent transformation needed to avoid runaway climate change," she added.

Experts agree that in order to keep average global temperatures from rising by more than 1.5 degrees Celsius (2.7 Fahrenheit) by the end of the century compared with pre-industrial times, the world needs to largely end man-made greenhouse gas emissions no later than 2050.

Well, in light of CAPP's

Well, in light of CAPP's expressed wish for a monumental rollback of environmental protections, I'd say 'net zero' news like this should go straight into the greenwash garbage bin. "Petroleum lobby group calls on Ottawa to back off climate agenda and cancel implementation of UNDRIP" https://www.straight.com/news/petroleum-lobby-group-calls-on-ottawa-to-b...

The fantasy that you can

The fantasy that you can produce oil and gas with 0 emissions is MAD MAGAZINE crazy enough...particularly if you're talking the tar sands.........and sorry, but if they were the oil sands it might be easier, but its essentially asphalt they extract up there......

But if they plan to do it with carbon offsets........like tree plantations, then its just your typical Shell game....they'll continue to pump out greenhouse gases, and somewhere else, peons will sequestor them by planting trees or putting up solar panels.

Let's stop believing in magical silver bullets and face reality. We need a war time rapid transition off the noxious stuff....currently selling for peanuts, but willing I'm sure, to go to war against solar and EV's to force oil prices to rise.