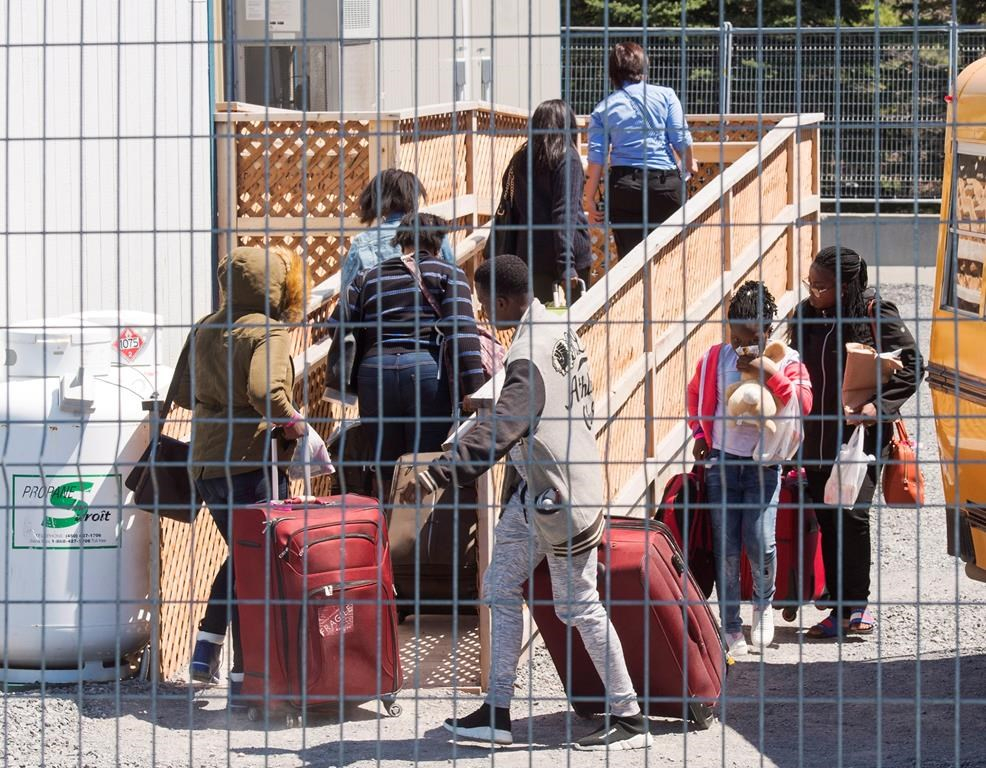 Asylum seekers at a temporary housing facility in St. Bernard-de-Lacolle, Quebec on May 9, 2018. Photo by The Canadian Press / Ryan Remiorz
Previous story
Next story

On March 17, the Immigration and Refugee Board of Canada postponed all in-person hearings for asylum claims until at least April 13. On March 20, the Canadian government announced it would close its borders to asylum seekers from other countries. For those crossing the Canada-U.S. border, Canada is turning away irregular asylum seekers and sending them back to the United States, whose current plan is to send them back to the countries they came from.

These actions violate non-refoulement — the core principle of the 1951 Refugee Convention, which asserts that a refugee or asylum seeker should not be returned to a country where they face serious threats to their life or freedom. Sending people back to violence also violates the fundamental principle of non-derogable human rights, and is logistically impossible in the current travel ban era. Although going home is not an option for the forcibly displaced, languishing in detention is an appalling alternative. Canada seems complicit in this.

Travel ban policies are rapidly evolving around the world. Many countries have either implemented measures to close their borders or are quickly preparing to do so, citing safety and security as reasons for barred entry. It is easy for those with citizenship status to forget that nations’ decisions about how they treat those within and without their borders are a major cause of precarity for forced migrants and asylum seekers.

Pandemics amplify the contradictions apparent in our state-based international system, founded on claims to land or blood-based citizenship (jus soli/jus sanguinis). Viruses have historically been and continue to be a thinly veiled excuse for latent xenophobia and nativism. U.S. President Donald Trump’s insistence on calling COVID-19 the “Chinese virus” is a stark reminder of this mentality. Canada and other countries have made certain exemptions to their travel bans to allow the flow of certain groups of people, such as family members and international students, so why have asylum seekers been excluded?

Asylum seekers must be included in national response plans, not simply ignored and left to fall through the cracks. If we continue to ignore this, the spread of the virus will be exacerbated and accelerated. We face this challenge here in Canada, as do the people of affected countries around the world.

Refugee camps in Jordan and Bangladesh are on lockdown. In Greece, the Ritsona refugee camp was put under quarantine after 20 people tested positive for the virus. While the physical movement of refugees is now more restricted than before, they have even less access to health care. Humanitarian workers are leaving camps. Doctors working with non-governmental organizations such as Doctors Without Borders face the impossible decision of remaining in the camps with little equipment or going back to their countries to support efforts there. Simultaneously, countries are monopolizing personal protective equipment by preventing exports of masks, ventilators, gloves and drugs. Consequently, the already-strapped camps are left with even less protection, with the camps lacking basic necessities, like soap and running water to begin with.

Even before the COVID-19 pandemic hit, refugees and asylum seekers were living in positions of vulnerability and marginalization. Having to grapple with a lack of access to adequate housing, education, employment, and sustenance while healthy is debilitating. Now, in light of COVID-19’s repercussions on health and well-being, the situation for communities without legal status and in positions of forced migration is increasingly unbearable. People who find themselves between borders are some of the world’s most vulnerable.

Saifullah Rohin of the Canadian Rohingya Development Initiative states that even though there has been some awareness-raising around the virus, in speaking about Kutupalong, the largest refugee camp in the world, he said,

“There are not enough precaution materials for the refugees. The internet ban remains still a big issue. I hope the outbreak doesn't reach there. If so, it will be a disaster for our people.”

"Canada has made exemptions from their travel bans to allow the flow of certain groups of people such as family members and international students, so why have asylum seekers been excluded?"

Policy responses to support vulnerable populations across the globe are starting to emerge. Canada pledged $50 million to help the world’s most desperate people, including those displaced by conflict and living in refugee communities. However, urgent questions arise around the dollar amount, the timelines, and the specifics of how the government will implement its commitment.

What we are left with is a country that closes its borders to asylum seekers while telling those on the outside looking in that we promise to support them. Contradictory, vague and seemingly haphazard responses by any government will continue to delay a long-term solution to COVID-19 — not only for the world’s most vulnerable communities, but for non-citizens and citizens alike. Canada must be proactive in including asylum seekers and refugees in policy responses that address this global pandemic.

Governments everywhere are fumbling their way through a catastrophe that should have been forseen but which the faulty human attention span allowed to happen. Responses have varied through the stages of denial, venomous scapegoating, panic and feeble mismanaged relief, which as always, winds up in the hands of the undeserving and greedy.

It appears to be truism that even multitudes of minds and computers are still incapable of predicting and preparing for "out of the ordinary" events. Denial and "obliviating" is the resting position of our species when confronted with insoluable complications, or even merely difficult or politically sensitive problems. Rolling over and playing dead is not a very effective response - even in the natural world. Humans are so much more rapacious they will try to advantage themselves whenever the opportunity arises, and dismiss the evil consequences from mind.

Politicians are merely human, although many try to make us believe otherwise. In truth, I often wonder if the weight and complexity of their decisions doesn't render them blind and deaf to either common sense or the excercise of compassion.