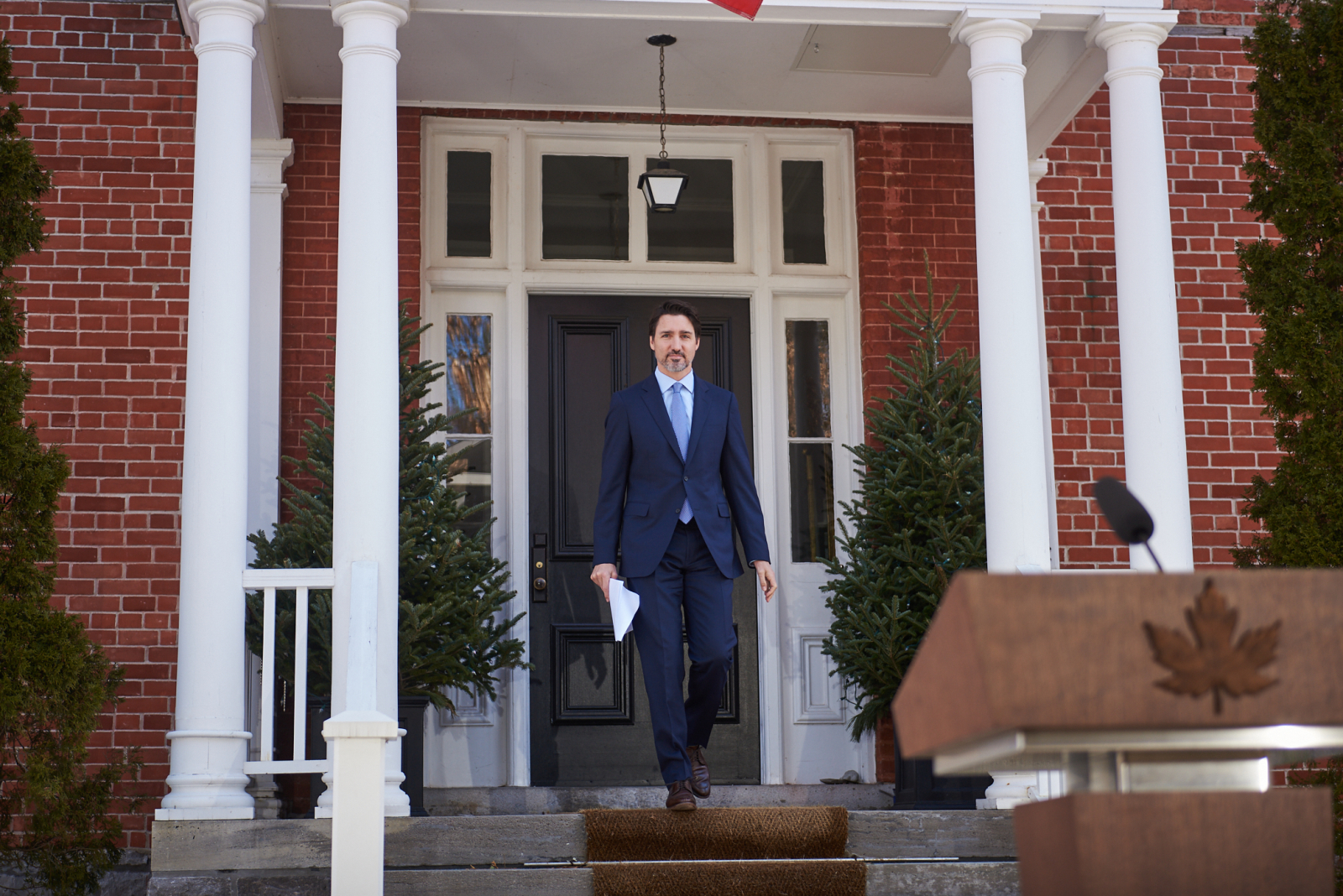 Prime Minister Justin Trudeau steps out of his home at Rideau Cottage in Ottawa on March 18, 2020 to speak with media. Photo by Kamara Morozuk
Previous story
Next story

Canada’s decision to start handing over irregular migrants to U.S. authorities is “letting fear drive policy,” as it did when ethnic Japanese were detained during the Second World War, says the director of a prominent refugee organization.

Refugee 613 director Louisa Taylor said she was “heartbroken” when she heard that Canada had reached an agreement with the United States to hand over irregular migrants, a term for people who have crossed into Canada outside official border entry points, such as at Roxham Road in Quebec to claim asylum.

“This is a sad day for Canada. We are knowingly creating chaos, uncertainty and significant risk for people whose only crime is asking for safety,” Taylor told National Observer.

Prime Minister Justin Trudeau sought to assure Canadians Friday that his government was “comfortable” that the new policy is in line with “Canada's values on the treatment of refugees and vulnerable people.” He also said the new measure would be temporary, and Public Safety Minister Bill Blair added later that there “will be necessary and limited exceptions.”

Trudeau made the announcement at the end of an unprecedented week in Canadian history, as Ottawa lifted the lid on a no-holds-barred plan to slow the spread of the coronavirus throughout the nation. More than 10,000 people have died globally from COVID-19 and there are now 915 cases in Canada and 10 deaths.

Public health professionals have urged all Canadians to stay in their homes as much as possible and avoid crowds to limit transmission of the virus. Bars, restaurants, schools, gyms, daycares and many retail outlets have shuttered. Multiple provinces have declared states of emergency while medical supplies run low.

“I get it. We are all scared. I'm scared,” said Taylor, whose organization, Refugee 613, is a communications hub that encourages people to welcome refugees as the building blocks of strong communities.

“But letting fear drive policy has always been a bad idea — think of the Chinese head tax, the internment of the Japanese in World War II — and it pains me that we are giving in to that fear today, precisely at the moment we should be rising above it.”

“This is a sad day for Canada. We are knowingly creating chaos, uncertainty and significant risk for people whose only crime is asking for safety." @refugee613 director on Canada's deal to turn away irregular migrants crossing U.S. border

Ottawa is closing the Canada-U.S. border to all non-essential travel, a policy set to go into effect midnight Friday. Canada has also restricted inbound international flights, diverting them to certain airports, and sending people into 14-day self-isolation while mandating airlines not let passengers showing COVID-19 symptoms board planes.

On Friday, Trudeau tightened the screws further, closing the door to irregular migrants, effectively shutting them out of the country’s immigration and refugee system by turning them back to U.S. authorities immediately instead of hearing their claims.

“Today, Canada and the United States are announcing a reciprocal arrangement where we will now be returning irregular migrants who attempt to cross anywhere at the Canada-U.S. border,” said Trudeau from Rideau Cottage in Ottawa, where he has been under quarantine.

Under the previously negotiated Safe Third Country Agreement, asylum seekers were already being turned away if they showed up at official border entry points.

But Canada is a party to the United Nations Refugee Convention, which says asylum-seekers can’t have penalties imposed on them for the way they enter a country.

That principle is meant to acknowledge the fact that vulnerable people fleeing for their lives may not have had the chance to get the proper documents in order before they escaped, or may have lost them on their journey to safety.

Rema Jamous Imseis, the representative in Canada for the United Nations High Commissioner for Refugees, acknowledged to National Observer that the world was mobilizing to combat the spread of COVID-19, including through cross-border restrictions.

“For many of us, in Canada and globally, life has come to a standstill and changed as we had never envisaged. However, today people also continue to be forced to flee their homes in search of safety,” said Imseis.

“While all states must manage their borders in the context of this unique crisis to protect public health and safety, they must carefully balance these measures to not close avenues to asylum or return people to situations of danger.”

UNHCR is in “close contact” with government counterparts in Canada and is “currently working to make sure that we fully understand and have all of the relevant information about the measures announced today,” Imseis added.

The agency wants to work with Canada to protect refugees and displaced persons from the virus, and ensure they have adequate health care.

'These are exceptional times'

In years past, the issue had actually been a point of contention between Trudeau’s government and more conservative politicians like Ontario Premier Doug Ford. In July 2018, for example, Trudeau said Ford wasn’t as aware of Canada’s international obligations to asylum seekers “as he might have been.”

Earlier this week, Blair had said irregular crossers would still be allowed into Canada but subject to medical screening and kept in quarantine.

During his media availability Friday, Trudeau was asked by journalist Justin Ling why he had changed the policy, particularly due to the threat of asylum seekers being taken into U.S. Immigration and Customs Enforcement detention or potentially deported, as a result.

“We recognize that these are exceptional times, and someone who comes to the border to request asylum will be turned back to American authorities — as happens right now when someone comes to an official border crossing and requests asylum,” Trudeau responded.

“We turn them over to American authorities at the border where they are released almost immediately into the United States. They are, for the most part, people who are legally in the United States and that is something we are confident about. We also have ensured that we are comfortable with this process as being in line with Canada's values on the treatment of refugees and vulnerable people.”

By Elizabeth May | Opinion | March 20th 2020
Coronavirus in Canada