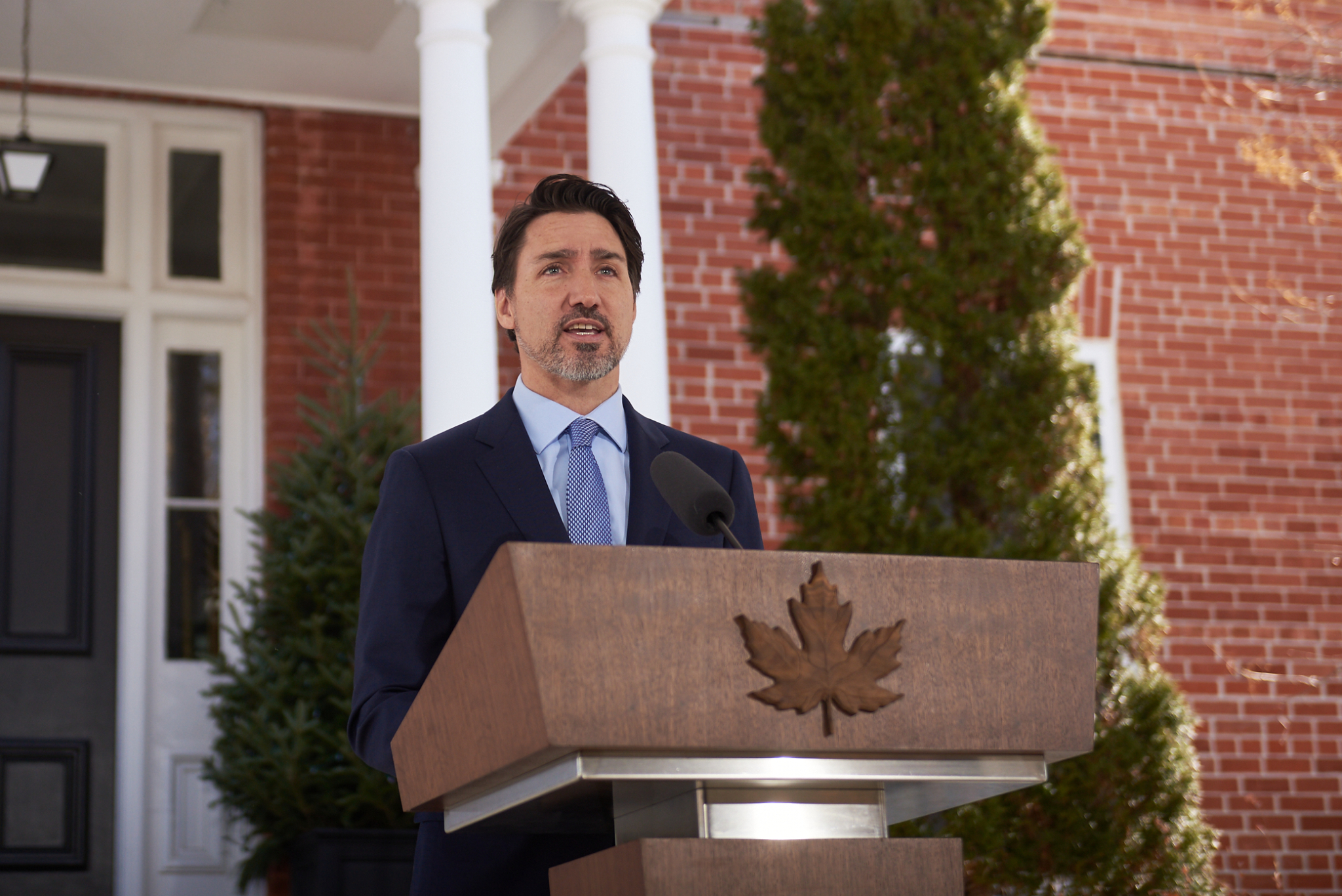 Canada and the United States are closing their shared border to "non-essential travel," the leaders of both nations have confirmed.

Travellers will no longer be allowed to cross the boundary, commonly referred to as the longest undefended border in the world, for reasons related to recreation or tourism.

Prime Minister Justin Trudeau said Thursday it was likely the new border rules will come into effect "in the night between Friday and Saturday."

Both countries are keeping trade lines open, saying that they want to maintain critical supply chains and allow key goods like food, fuel and medicine to continue to cross the border.

Trudeau spoke with U.S. President Donald Trump prior to the announcement, which was first revealed by the president Wednesday morning on Twitter. Trudeau then spoke about 45 minutes later from Ottawa, where he has been in self-isolation at Rideau Cottage.

"We have agreed that both Canada and the United States will temporarily restrict all non-essential travel across the Canada-U.S. border," said Trudeau.

"In both our countries, we're encouraging people to stay home. We're telling our citizens not to visit their neighbours if they don't absolutely have to. This collaborative and reciprocal measure is an extension of that prudent approach."

The government has been introducing significant new policies in order to fight the rapid spread of COVID-19, the disease caused by the coronavirus, ​​​including diverting inbound foreign flights to select Canadian airports, closing the border to most non-citizens and mandating that airlines not allow travellers showing symptoms to board planes.

Travellers will no longer be allowed to cross the Canada-U.S. border, commonly referred to as the longest undefended border in the world, for reasons related to recreation or tourism, the leaders of both nations announced March 18.

Those announcements have come in concert with ones from the provinces, such as a declaration of a state of emergency in B.C., Ontario and Alberta, the closing of bars, restaurants, arts venues and other public gathering places, and the recommendation for people to self-isolate at home except for essential outings to places like grocery stores.

Canada's Chief Public Health Officer Dr. Theresa Tam said Wednesday there are now over 200,000 cases of COVID-19 in over 165 countries, with 598 cases and eight deaths in Canada.

Trump tweeted at 9:37 a.m. on Wednesday that “we will be, by mutual consent, temporarily closing our northern border with Canada to non-essential traffic. Trade will not be affected. Details to follow!”

Later on Wednesday at a press briefing at the White House, Trump reiterated that he had spoken with Trudeau about the decision.

Asked by a reporter if there was a "tipping point" between Wednesday's decision and previous COVID-19-related announcements that had convinced the two leaders to take action at this moment in time, Trump said no.

"No tipping point; it's just that we want to isolate from the standpoint (that) we don't want people coming into contact" with others who may be infected, said Trump. "It's just something we thought would be good for both countries."

Both leaders emphasized that the new rules will not affect trade.

"I want to be clear, though, that essential travel will continue. Our governments recognize that it is critical that we preserve supply chains between both countries," said Trudeau.

He said "food, fuel and life-saving medicines" will continue to flow and "supply chains including trucking will not be affected."

Trump similarly said "you can only be vigilant and very professional, but it's not pertaining at this moment to trade between the two countries."

The closing of the border will have major ramifications for Canadian and American society. $2.7 billion in trade flows over and about 200,000 people cross the border every day.

U.S. travellers took 3.8 million trips to Canada just in the first quarter of 2019, according to Statistics Canada, and spent $1.3 million.

"We get our groceries thanks to truckers" who drive across the border with fresh produce, as well as essential workers who cross daily, Deputy Prime Minister Chrystia Freeland noted on Tuesday.

The Canadian Chamber of Commerce said it was "encouraged" by Wednesday's announcement, given that Canada's most important trading partner was the United States.

"With the escalating COVID-19 crisis, we acknowledge the imperative to protect public health. At the same time, Canadian businesses know firsthand the impact of border restrictions on getting the goods and services our country needs to fill grocery store shelves, as well as the impact on exporting abroad," the Chamber said in a statement.

Dan Kelly, president of the Canadian Federation of Independent Business told CPAC on Wednesday that the business environment was already "alarming" and the continued spread of the virus will lead to "huge numbers of business closures" in particular for the tourism industry, as well as restaurants, hotels, bars and retail outlets.

A quarter of his members surveyed said they could not survive more than a month if sales are cut in half, as they appear to be already, said Kelly.

Public Safety Minister Bill Blair has said that the COVID-19 restrictions would not stop asylum seekers crossing at unofficial points of entry at the Canada-U.S. border, but that they would be facing new health checks.

Editor's note: This story was updated at 12:49 p.m. on March 18, 2020, to include additional information from Trudeau and the Chamber, and again at 1:26 p.m. to include details from Freeland. It was updated a third time at 11:31 a.m. on March 19, 2020 to include more precise information about the border closing Friday night. This replaces an earlier statement that the exact time at which the border would close was still being determined.