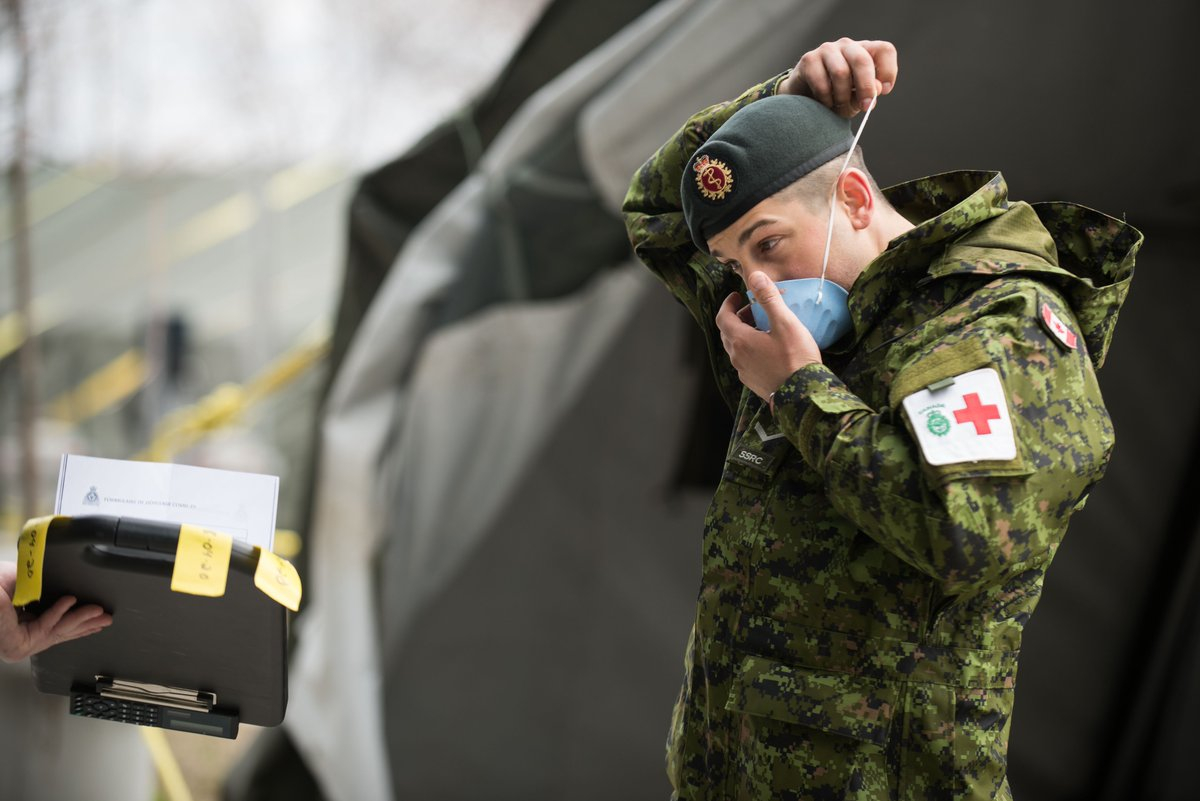 After Quebec called in the military for help with COVID-19 in nursing homes last week, Ontario Premier Doug Ford made a similar call Wednesday. Photo from Canadian Armed Forces/Twitter
Previous story
Next story

Although he said a week ago that the province didn’t need to call in the military, the premier said front-line medical workers in those homes need more support. The novel coronavirus is “ruthlessly attacking” Ontario’s long-term care system, Ford said.

“As we need more resources, we’re bringing more resources in,” Ford said in response to questions from reporters about what changed his mind. “I’ve never been reluctant to call for help.”

It wasn’t immediately clear if the Canadian Armed Forces would agree to the government’s request. Long-Term Care Minister Merrilee Fullerton declined to say where the extra help would be deployed, saying only that they would go to five homes that have been hit particularly hard by the virus.

Teams of about 50 from the military could be deployed to five hard-hit nursing homes, said Dr. David Williams, the province’s chief medical officer of health. The teams would be led by nurses and include medics and general military personnel who can be assigned to other tasks, he added.

Quebec Premier Francois Legault made a similar call for help last week. Workers at nursing homes there have abandoned their jobs as outbreaks worsened, and the province has struggled to fill staffing shortages.

The virus disproportionately sickens and kills elderly people and those with underlying health conditions, and once it gets inside a nursing home, it has proven difficult to stop. Infections inside long-term care are now accelerating even as community spread of the virus appears to be slowing.

The Ontario Long Term Care Association, which represents nearly 70 per cent of the province’s private, not-for-profit, charitable, and municipal long-term care homes, praised the Progressive Conservative government’s move to call in the military.

COVID-19 disproportionately sickens and kills elderly people, and has spread through nursing homes like wildfire. Now, Ontario Premier Doug Ford is asking the military for help to stop it.

“Today’s announcement, following similar measures in Quebec, will mean more support where it is needed most,” said the group’s CEO, Donna Duncan, in a statement.

Doris Grinspun, CEO of the Registered Nurses' Association of Ontario, said an interview with National Observer that she’s “confused” as to why Ontario needs the military in this case. Quebec lacked a pool of nurses when it asked for help, but Ontario still has plenty who could be deployed, she added.

“We can serve all of them,” she said. “Give me the names of the homes and we will send help.”

COVID-19 has become a 'wildfire' in long-term care

Nursing homes in Ontario have struggled with understaffing and underfunding issues that long predate the pandemic. And earlier this month, a CBC News investigation showed that under Ford, the government had largely stopped doing unannounced annual inspections of long-term care facilities, instead visiting the homes only in response to complaints.

A central tenet of the plan was barring staff at homes from working at multiple facilities. Many work several jobs to make ends meet, but the practice is linked to the spread of the virus between homes.

That measure took a week to take effect, however, meaning Wednesday is the last day before workers must stick to one facility. The measure also exempts workers from agencies, which the Opposition NDP criticized as a significant loophole.

Ontario also announced Wednesday that it will begin screening all long-term care home residents for the virus, along with increased numbers of staff, stepping up a testing program it already upped last week.

It’s not clear when the increased testing will be rolled out. Though Ontario has lagged in screening for COVID-19, it is gradually increasing capacity, processing 10,000 tests a day as of Wednesday and aiming for 14,000 by the end of April.

Last week, Ford said he feels the province should open an inquiry into the state of long-term care once the pandemic is over. He also left open the possibility that such a probe could examine his government's response to the novel coronavirus.

No. You don't get to bail, Mr. Ford. Get busy and figure it out. You are supposed to be the great manager. There are thousands of people in Ontario who can be brought on board. But, it would cost money, and you want to shift the costs to the federal government. Shame on you.

Calling in the military to do

Calling in the military to do what?? Intensive cleaning? kitchen help ? what kind of military? engineers? food prep? digging latrines? logistics for ordering?
I can't figure out what they need military for rather than more highly trained nurses---as in full time paid well , where load per worker is reduced to a load that allows careful treatment for each client. Common. sense tells us that this is clearly what's needed. This would demonstrate a new higher standard of care that would be hard to drop again after the crisis and justify as ok.

The part that's ridiculous to

The part that's ridiculous to me is not that he's requested military aid, but that it took this long for him to get it that he's out of his depth. Give the dude a break: he's a highschool dropout, and he didn't elect himself to office. Neither did the people where most of the old folks are dying. Surely the point now is to have as many people as possible get out of this alive.
The part that I'm having difficulty wrapping my brain around is breaking infections into two groups, calling them "community spread" and "care institutions."
If it were only residents becoming ill, then call it "care institutions." But when caregivers and other staff are moving in and out of their homes, transit, stores, etc., back and forth between care establishments, and betweeen care establishments and "the community" ... there's no way that what's going down in care facilities isn't spreading into the community.
Mr. Ford was the head of the chain of command that didn't provide adequate surge capacity in hospitals, have adequate emergency equipment stockpiled, etc., and his ministers and public health people (as with the federal personnel) were left covering the governments' arses for not having prepared for a future pandemic, as the SARS commission/enquiry recommended.
Not to mention that there has been an ongoing game of "follow the WHO leader." Surely that's not how the sum of our public health mechanisms are supposed to work. But then, imagine what would have happened had they been upfront at the beginning about non-symptomatic spread, and started sending kids home from school bc *they* could be infecting their grandmas.
I must say that I find akin to hate speech the continual harping about The Boomers being the cause of everything miserable ... from high taxes, to high rents and house prices, to everything wrong with the environment, tax structure and economic systems. It's high past time that this became recognized as ageism, and that there was a similar spread between "winners" and "losers" in the "economy" (including job markets) from the late 70s/early 80s onward. That's when The Boomers were the same age as the cohort that today is suffering. Some of them, through no fault of their own, have lived in poverty most of their lives, too. Including the kind of poverty that didn't allow purchasing coffee to mak at home, let alone lattes. And some of the Millennial kids who were brought up in those very poor families are now doing OK, while others just are not. But few of the Millennial kids from households in the top income/wealth deciles are in trouble. Let's switch the channel, and call out where the cookie actually crumbles.
If anyone has access to any study that separates age itself as a risk factor from any of the risk factors comprising chronic illness, please share!
Meanwhile, Dougie calls for "testing, testing, testing" ... but there are no changed test protocols. Hmmm. Maybe the military should do that?