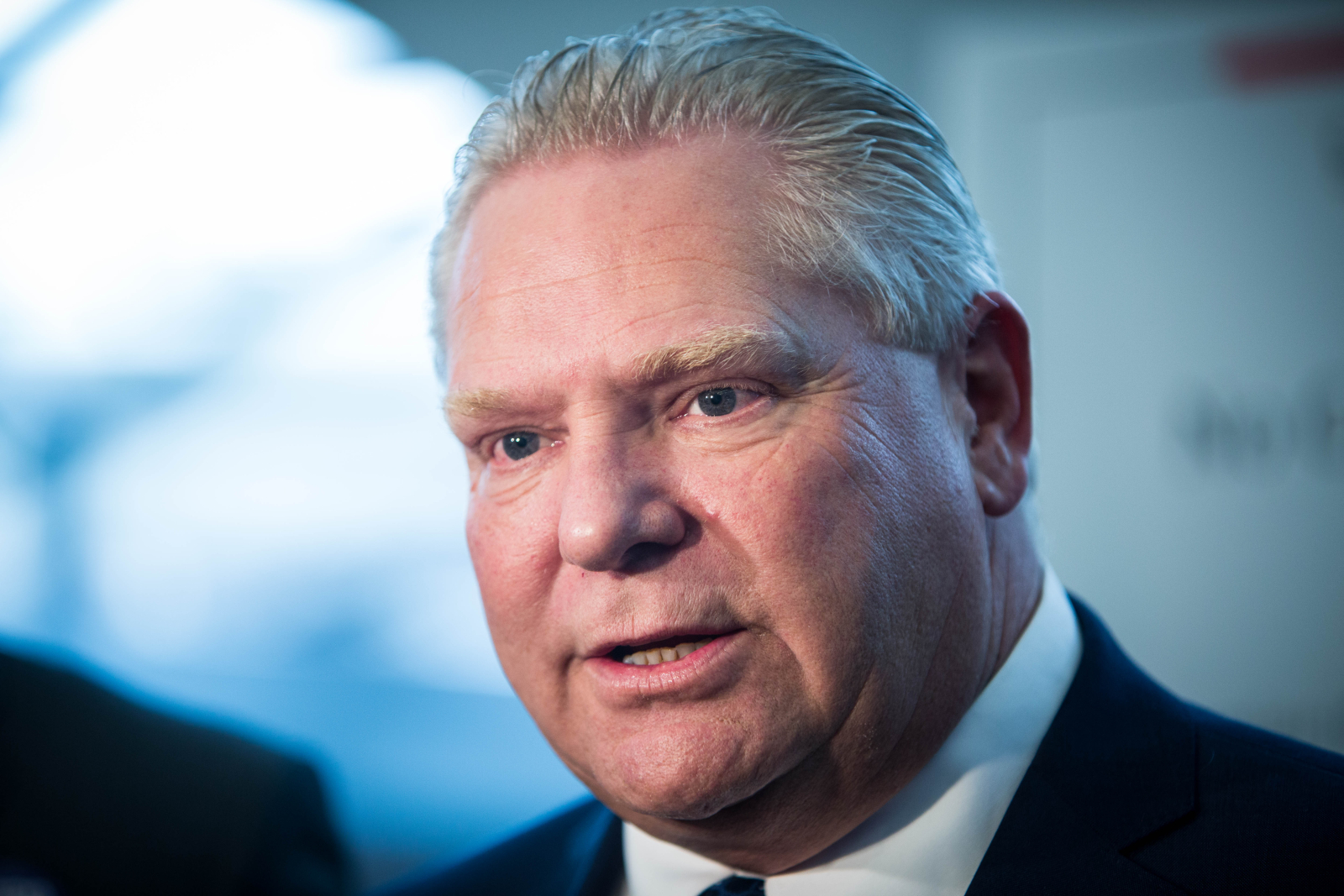 In some ways, long-term care was a COVID-19 storm waiting to happen.

The virus is most deadly to elderly people and those with pre-existing health conditions — the main demographics for long-term-care facilities, which across the country have been ravaged by COVID-19.

But government decisions have made it worse. Combine the pre-existing risk with the chronic understaffing and underfunding that have plagued long-term care in Ontario and across the country, and you have the makings of an accelerating disaster.

“It is impossible to imagine the anguish that families and indeed our elders are going through in this situation,” Prime Minister Justin Trudeau said Thursday. “We need to do a better job of being there for them.”

In a few horrifying cases, medical staff have abandoned their long-term-care jobs, leaving the sick to die and the living to suffer. And even with the best care possible, residents have died alone, their family members not allowed inside to say goodbye.

But the long-term-care outbreaks have been especially bad in Ontario, while some provinces have been weeks ahead in making key moves to address the crisis.

‘No one gives us back time’

The problem struck British Columbia first, as a cascade of cases and deaths at North Vancouver’s Lynn Valley Care Centre caught national attention in March. The province has made several critical moves since then.

The Ontario government says it has acted quickly and often to stop the spread of the virus in long-term care. But B.C. acted weeks earlier, and critics say key problems should have been addressed a month ago. #onpoli

B.C. barred long-term-care staffers from working at more than one facility on March 27. Many have part-time hours at multiple workplaces, and must work at several to make ends meet. But the practice, flagged as a problem after the deadly SARS outbreak in 2003, has also allowed for COVID-19 to spread rapidly between care homes.

“Restrictions much tighter than these should have been put in place weeks ago,” Ontario NDP Leader Andrea Horwath said Wednesday.

And though Premier Doug Ford originally said he’d top up Ontario’s notoriously low wages for such workers, the province has since deferred that to the federal government and encouraged long-term-care homes to give staff full-time hours.

The issue of wage increases for long-term-care staff topped the agenda for a phone call between Trudeau and provincial and territorial leaders Thursday night. They “agreed on the urgent need to ensure long-term-care facilities have the resources they need to protect the health and well-being of their residents and workers,” a summary of the call released by the Prime Minister’s Office said. (In general, long-term care is a provincial responsibility.)

Ford has repeatedly said Ontario placed an “iron ring” around the elderly, acting early and often in stopping the spread in long-term care. The government has given the system infusions of extra funding, and updated provincial guidelines. And the province rolled out an action plan this week that involves enhanced testing ⁠— though it still is not testing all long-term-care residents and staff, as Quebec has ⁠— and redeploying “COVID-19 SWAT teams” of experts from local hospitals.

“We were active and decisive for months, putting in every measure under the guidance of the chief medical officer of health and public health,” Long-Term-Care Minister Merrilee Fullerton said Friday. “Clearly, COVID-19 is spreading in a different way and more tools are needed.”

The non-profit Ontario Health Coalition said in a statement Friday that the province's actions fall short of what's needed.

“We are increasingly frustrated with the disconnect between the statements of the premier and what is actually being put into the regulations, directives and guidance issued by his own government,” executive director Natalie Mehra said in the press release.

“We are inundated with calls and emails from families with loved ones in long-term care and staff in the homes, crying, afraid, furious about the lack of testing, even in homes with outbreaks.”

Doris Grinspun, CEO of the Registered Nurses' Association of Ontario, said the province should have acted a month ago, when her organization first raised concerns. She also said there is much more that remains to be done.

“No one gives us back time,” Grinspun said in an interview Thursday. “We can only do the best we do with the time we have left, until there is a vaccine.”

How did it get so bad in Ontario?

While the spread of the novel coronavirus appears to be slowing in Ontario as a whole, with officials predicting it may now be peaking, COVID-19 is picking up steam in long-term care. Those infections are now driving the province’s totals.

Of the 564 new cases reported in the province Friday, an estimated 334 were long-term-care patients, associate medical officer of health Dr. Barbara Yaffe said.

The problem hit the spotlight in 2019, after an inquiry prompted by the case of serial killer Elizabeth Wettlaufer, a long-term-care nurse who confessed to the murders of eight elderly patients. The probe identified “systemic vulnerabilities,” with Justice Eileen Gillese calling Ontario’s long-term care “strained” and asking the government to up funding and staffing.

The Progressive Conservative government had been working to address the recommendations when the pandemic hit, Fullerton told reporters this week.

In a report this week, CBC News also revealed the Ford government largely stopped doing unannounced annual inspections of long-term-care homes. The province continued conducting investigations done after complaints, but in those cases, the facility knows an inspector is coming. Annual inspections have uncovered issues with neglect, sanitation and abuse inside homes, CBC reported.

More recently, the government has allowed long-term-care homes to require staff who test positive for COVID-19 to work in the facilities under adapted self-isolation guidelines.

“Staff are contacting us because they are being required to work, even when they test positive, and they are afraid of infecting others,” Mehra said in the Ontario Health Coalition statement. “Workers are angry and they are frightened and the many family councils we work with share their anger.”

3/8 Deaths have disproportionately impacted our #OlderAdults, with over 90% of reported deaths occurring among those aged > 60 years and almost 50% of deaths linked to long term care home outbreaks. #COVID19#ProtecttheVulnerable

On Wednesday, Ford said he thinks the province must open an inquiry into long-term care once the pandemic has passed. He also left open the possibility the inquiry could delve into his government’s response to the pandemic.

In the meantime, Grinspun said, Ontario must do more and do it quickly. It needs to push out more personal protective equipment to allow everyone working inside long-term-care homes to wear masks. “We have been asking for that since March 12. That’s a long time, almost a month.”

Grinspun also called for more tracing of the close contacts of people infected with COVID-19, something she said the province has done “inconsistently.”

“They are taking risks to provide care, but feel they are being blamed for the outbreaks, have been required to give up part-time jobs, but still nothing has been done to address their long-standing grievances about poor pay, heavy (caseloads) and conditions of work,” Mehra said in the statement.

Grinspun said the province must also learn from what went wrong with long-term care and apply it to prisons and homeless shelters, which carry many of the same risks, before the outbreak gets out of control in those facilities.

“We need to ramp that up more,” she said. “If something happens there, it will be devastating.”

name the owners of these for-

name the owners of these for- profit homes. Many nursing homes are money spinners for hedge funds ,some in China! Prov Gov gives all homes funds with no strings, no regs, no inspections and assumes they will use funds for patients/residents and staff. Ha. Where do they suppose the profit is coming from? wink wink Out of the wages of staff, the quality of food, the lack of cleaning and upkeep, etc. Disgusting shell game with pushing public funds to private profit.
Name the CEOs , interview them on camera.

MAKE REGULATIONS WITH PENALTIES, JAIL TIME. Anything less is cheap talk
Shame on DR Merilee Fullerton of the zombie eyes and the lies she tells. More like an "iron ring" around the lies of how much care they are tkaing --- anyone got info on how often corps lobby Doug on these homes?

While Ford initially seemed pretty good (given how low expectations were), he is now being exposed for his failure to put lives ahead of money. BC made it law regarding the employees of these residential places on March 27, but informally got it in place a lot quicker than that at the first affected sites, about 2 weeks before that. How is it that Ontario missed this clear indicator? It is called "money".

You are right. One of the

You are right. One of the main recommendations after SARS (which was mainly Ontario's epidemic) was to stop multiple home employment by the same workers, and to structure pay levels better. Did not happen, not anywhere. BC did jump on this on its own, rather than trying to get the feds to pay the bill (as is Ontario, even now), and got ahead of the curve. People have died because our leaders did not address this after SARS. Can't help but wonder if they have learned anything yet about this, and the value of inspections.