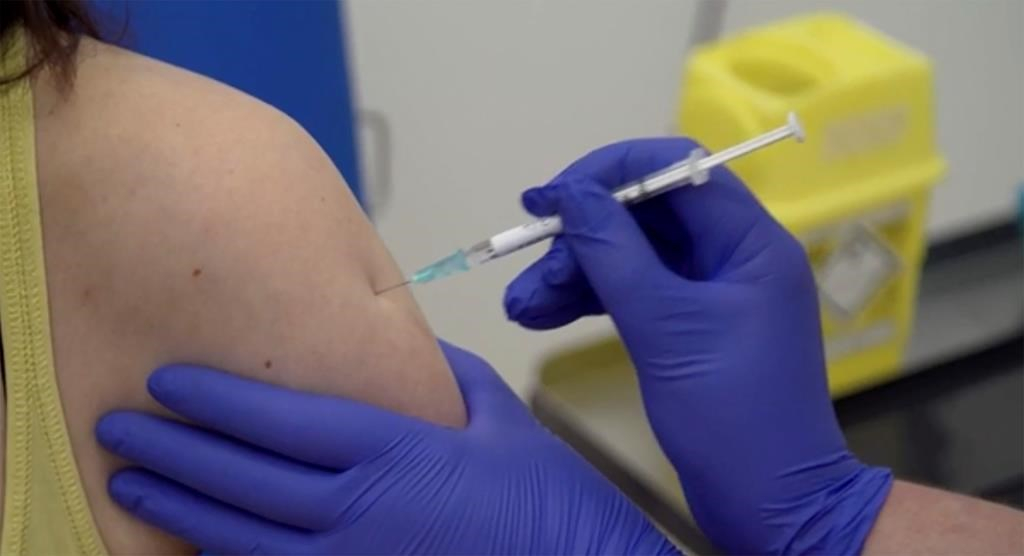 A screen grab taken from a video issued by Britain's Oxford University shows a person being injected as part of the first human trials in the U.K. to test a potential coronavirus vaccine on Apr. 23, 2020. Handout photo by The Oxford University Pool via AP
Previous story
Next story

While researchers across the planet race to find a vaccine for COVID-19, a new poll suggests Canadians are divided over whether getting it should be mandatory or voluntary — setting up a potentially prickly public health debate if a vaccine becomes available.

The federal government has committed tens of millions of dollars to help find or create a vaccine for the novel coronavirus that causes COVID-19, the respiratory illness that has infected at least 48,000 Canadians and killed more than 2,700.

Yet the poll conducted by Leger and the Association for Canadian Studies found that while 60 per cent of respondents believe people should be required to get the vaccine once it is ready, the other 40 per cent think it should be voluntary.

While that doesn't mean only 60 per cent would get the vaccine themselves, Leger executive vice-president Christian Bourque nonetheless said he would have expected much higher support for a mandatory vaccine given the scale and scope of the pandemic.

"It's almost as if it's seen as just another flu vaccine," Bourque told The Canadian Press. "I myself would have expected a higher number given the severity, given the crisis we're in. But Canadians are kind of divided on this."

The Leger poll was conducted April 24 to 26 and surveyed 1,515 adult Canadians recruited from Leger’s online panel. The internet-based survey cannot be assigned a margin of error because online polls are not considered random samples.

Older Canadians, who are most at risk of serious harm from COVID-19, were more likely to support a mandatory vaccine. Respondents who identified themselves as likely to vote Liberal were also most likely to agree with a mandatory vaccine while those leaning Conservative were least likely.

Bourque suggested this was a reflection of ideological differences seen throughout the crisis: those on the left of the political spectrum are more willing to accept government intervention than those on the right who prioritize personal freedoms.

The poll also looked for the first time at what activities Canadians would feel comfortable doing once government restrictions imposed because of COVID-19 are finally lifted, including returning to their offices, shopping, dining out and attending concerts and sporting events.

The results, which comes as many provinces are unveiling tentative plans and timelines for easing restrictions, was a mixed bag. Respondents were comfortable with some activities but not others, particularly those involving large groups of people in the same place.

The majority (58 per cent) felt they would be comfortable allowing in-home renovations by contractors, going to farmers' markets (57 per cent) and shopping at the mall (53 per cent). And only 15 per cent said they would not be comfortable returning to their own workplaces.

Yet only 45 per cent said they would be comfortable eating in a restaurant while 24 per cent would feel comfortable going to the gym, 23 per cent flying on an airplane and 21 per cent attending a large gathering such as a concert or sports event.

"The ones that are at the top, these are activities where people feel they can manage some form of social distancing," Bourque said.

The poll also indicated the level of trust and satisfaction Canadians feel toward their leaders and public-health officials has remained consistently high since a similar poll was conducted the previous week. The number who were afraid of catching COVID-19 also remained unchanged.

Yet the number of respondents who admitted to breaking at least one of the guidelines around managing COVID-19, such as practising physical distancing, going out only for necessities and washing their hands more often, was found to have increased to 33 per cent from 27 per cent.

"To me it's an indication that they're looking for deconfinement news because they're starting to slack off a little bit on what they should be allowed to do," Bourque said. "I think if there is no plan for deconfinement, people will start to become more delinquent."

Feds pour $1.1B into COVID-19 vaccine development, tracking of cases

I am wondering about the

I am wondering about the efficacy of a vaccine. Everyone (well, most people) is waiting with bated breath as if this will solve the problem, but will it? If people are not necessarily immune after they have had the virus, doesn't that mean they will not necessarily be immune after they have had the vaccine? And do we have any idea how mutable this vaccine is?

Don't get vaccinated, stay in

Don't get vaccinated, stay in lockdown. Once the vaccine's efficacy has been thoroughly tested, that should be the choice.

Canadians need to be allowed

Canadians need to be allowed debate and truly informed consent - which would rule out mandatory vaccines - and we presumably do not want to be used as pharmaceutical guinea pigs. How likely is the vaccine to be effective, what are the side effects likely to be, will there be mercury/thimerisol or aluminum in the vaccine, will the makers be held accountable, will there be a conflict of interest among the people promoting the vaccine and those who stand to gain? See the Nuremberg Code and the Declaration of Helsinki, upon which Health Canada regulations are based: https://www.ualberta.ca/vice-president-finance/quality-management-in-cli...

There won't be any sanity in

There won't be any sanity in the vaccine debate until we stop assuming that they are all equally good or bad. The vaccine label is pure platinum to marketing.