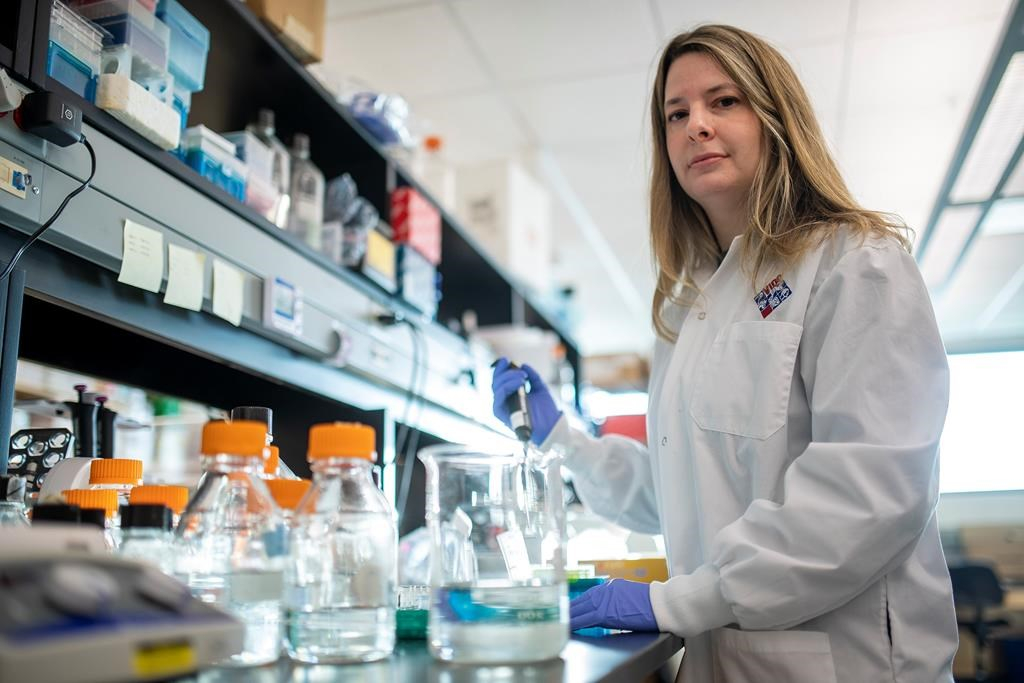 Alyson Kelvin, who is working on different coronavirus solutions, stands for a photo at her University of Saskatchewan lab inside VIDO-InterVac in Saskatoon, on Friday, March 13, 2020. Photo by The Canadian Press/Liam Richards
Previous story
Next story

For a Halifax father and daughter dedicated to taking on global infectious diseases, the novel coronavirus has led to their latest, exhausting push to create tests and vaccines to save lives.

Alyson Kelvin, 39, and David Kelvin, 65, are once again in the trenches of a race to find long-term solutions, hoping for success while public interest and funding remain in place.

Alyson, a virologist working at Dalhousie University, has been seconded to the Vaccine and Infectious Disease Organization - International Vaccine Centre in Saskatoon since mid-February to test vaccines in lab animals.

Meanwhile, back in Halifax, her father — a professor in Dalhousie's department of microbiology and immunology — is immersed in creating a portable test kit to identify the severity of the illness for people who test positive for the virus.

Both are engaged in "rapid response" science, which has meant fast-tracked federal funding is paired with swift collaboration with scientists around the globe working on the pandemic.

"I work from waking up until going to sleep," the younger Kelvin said during an interview from Saskatoon. "My whole life has shifted. My husband and children are back in Halifax."

The pursuit of infectious disease solutions is a family passion, she adds.

"That's how I was raised," she says, referring to her observation of her father's work on HIV-AIDS as a young woman.

Her career has already included work on the first SARS outbreak, the Zika virus and various influenza outbreaks. Her father has worked on many of the same outbreaks.

David Kelvin has several projects on the go, including a push to identify "biomarkers" — in this instance molecules that activate white blood cells — that will indicate if a person who tests positive for the virus is at risk of developing a severe case of COVID-19.

The goal is to create a kit that would allow health care providers to determine in as little as 20 minutes who needs to be hospitalized, which could potentially keep vitally needed beds and respirators open for patients most in need.

"Rather than going through a lengthy process of days, we can do it rapidly and provide assistance to doctors who are looking at a surge of patients and can decide who should receive hospitalization at the earlier stages of the disease," he explained in an interview.

In Saskatoon, his daughter, accompanied by a doctoral student and technician from Dalhousie, is working with coronavirus investigator Darryl Falzarano at the International Vaccine Centre to carry out animal tests for potential vaccines.

Her knowledge of ferrets is key as the animal was identified as a helpful model for human immune reactions in the SARS outbreak in 2002-03, and is believed to also be a useful lab animal for testing vaccines for the novel coronavirus.

Her team is working with three vaccines developed by Halifax molecular virologist Chris Richardson, also a Dalhousie University scientist, and a vaccine developed by a scientist at the centre.

While their work has to move as swiftly as possible, she says that doesn't mean compromising a meticulous methodology to avoid any safety risks. Without animal-testing stages in vaccine research, it's possible errors can occur, she said.

"It's especially important because the original SARS vaccines weren't effective and sometimes led to more severe disease in the end. So, this is an important stage of the evaluation," she said.

Having vaccines a year from now for the novel coronavirus may still be vital, the researcher said.

"We may see waves of it in the same way we do with influenza .... Having a vaccine and being ready for this particular virus could help us if that becomes a reality," she said.

Richardson, who has worked in the field for four decades, said regular vaccine research can take several years.

"Typically it could be two years and clinical trials can go even further," he said in an interview.

He says one of the frustrations is that funding can dry up after an outbreak prompts an initial surge in interest. The veteran virologist said he hopes it will be different this time.

The father and daughter both say they are relying on Ottawa to keep funding flowing in the months to come, even if the pandemic calms.

"This call for the initial research was $1 million," David Kelvin said. "It's a fantastic initial start. We realize and know that to continue this through the full duration of the infection cycle, we're going to have to have a lot more investment."

He's hopeful the biomarkers for the potential test kits will emerge from his collaborators in China and Italy in four to 10 weeks, but further work will then require commercial collaborators interested in producing the kits.

The family connections in the research are likely to continue. Alyson Kelvin said that as her father's team's kits evolve, her team will be able to test their effectiveness.

"We can experimentally induce viral infection and disease, and we can evaluate the kits using samples from our experiments before they're used in people," she said.

Amid the current pressure for results, David Kelvin says it may be time for government to reflect on whether the funding for vaccine research should have been in place sooner and on a steadier basis.

Too often, he says, interest has faded when the worst of an international infection passes.

"We need to impress on everyone this is our third pandemic in 20 years," he said. "We don't want to respond in an emergency fashion every time. We want to be really well prepared."