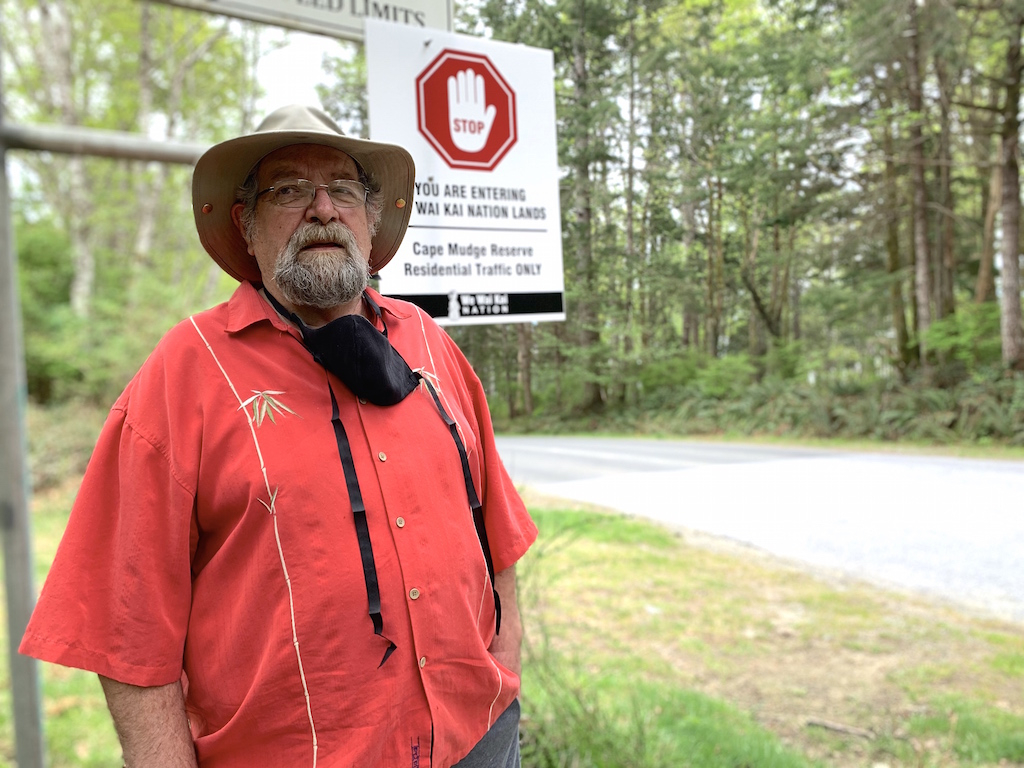 Quadra Island We Wai Kai councillor Ted Lewis says the sad news of a coronavirus death of a First Nations elder from another island community underscores the need to keep his nation's reserves on lockdown. Photo: Rochelle Baker
Previous story
Next story

The shutdown of First Nations communities is more crucial than ever with the sad news that an Indigenous elder from another island has died from COVID-19, says a Quadra Island, B.C., council member.

“My first thought was real sadness to hear this,” We Wai Kai Councillor Ted Lewis said.

“It hurts all First Nations to hear this. Quite a few members have family up there, lots of people are related to that community.”

The woman who died Friday was from the ‘Namgis First Nation on Cormorant Island, located north of Quadra and off Vancouver Island’s east coast.

The elder was the first person to die of COVID-19 from an Indigenous community in British Columbia.

The ‘Namgis First Nation and the village of Alert Bay has renewed a state of emergency until May 1 to deal with the ongoing outbreak of the virus on the island.

Local physician Dr. Dan Cutfeet posted a video update on Facebook Friday, saying everyone was thinking of her family and friends and offering prayers upon the woman’s death.

“These are challenging times and I think everybody is tired, and ready for their old lives to resume,” Cutfeet said.

The doctor thanked the community for all its hard work around physical distancing and social isolation, before urging any residents with any virus symptoms, no matter how slight, to seek testing.

“It’s just reinforced, in my mind, that we’ve got an invisible enemy and that our village must stay on guard and keep doing what we’re doing," Quadra Island We Wai Kai councillor Ted Lewis on his nation's reserve lockdown with the COVID-19 pandemic.

“This is a tragedy that’s beyond just us. It’s a tragedy for all of us. Our elders, in particular in our First Nations communities, are culture and history keepers,” Henry said.

“When they become ill and they die, we all lose, and I want you to know that we feel that collective loss today.

“My thoughts are with her family and her entire community, as I recognize the tragic impact this has on all of them.”

Lewis said the elder’s death highlights that no community is immune to the novel coronavirus.

“It shows the fact that we’re all vulnerable, and there’s no getting away from this thing,” he said.

“It’s just reinforced, in my mind, that we’ve got an invisible enemy and that our village must stay on guard and keep doing what we’re doing.”

The We Wai Kai Nation reserve members live either in Cape Mudge Village on Quadra Island, or on the Quinsam Reserve adjacent to Campbell River on neighbouring Vancouver Island.

Both Cape Mudge and Quinsam have closed or limited road access to its communities and reserve lands for non-residents during the pandemic, said Lewis, who noted many of the nation’s elders most at risk from the virus are concentrated in Cape Mudge.

“Elders make up 75 to 80 per cent of the village,” he said, adding the community must be extra cautious.

The We Wai Kai have posted signs on roads leading into the village asking people who don't live there not to use them, Lewis said.

Generally, other islanders have been respectful of the We Wai Kai request and are avoiding the village, he said.

However, some people are still parking along Green Road, north of the village, and accessing the nearby beach, Lewis said. The community has erected concrete barriers to deter drivers from parking there, but some are ignoring them, he added.

Aside from the increased risk to Cape Mudge during the pandemic, parking along the narrow road is an ongoing traffic hazard, Lewis said.

“If you get a car cruising along at 60-70 km and a deer jumps out in front of you, you’ve got no place to swerve to miss it because there are cars parked there.”

The community also has huge concerns about the persistent problem of people violating the beach fire ban, he added.

Merci Brown, We Wai Kai director of lands and natural resources, said village residents regularly contact her in the middle of the night during the summer wildfire season.

“Every time they see a fire or smoke from an abandoned fire, they are calling, and understandably so. I would be too,” Brown said.

“They are terrified a fire will escalate and put them at risk.”

Littering and encampments are also problems along the beach, she said.

“Quadra Island residents as a whole want what’s best for the community, it’s just a few people who ruin it for everybody else," she added.

We Wai Kai is also asking residents not to enter reserve land or the campground that’s adjacent to Rebecca Spit provincial park, which is also closed to the public as a COVID-19 measure, Brown said.

The Quinsam community has also blocked access to the reserve on Nursery Road, leaving only the Willis Road access open to local traffic, she said.

The restrictions on visitors to the reserves are temporary and will be eased as the health crisis abates, Brown said.

Lewis agreed, adding the We Wai Kai Nation has a good relationship with Quadra Island residents and visitors and will welcome them again in the future.

“We want people to come see us in the village and visit our cultural centre.”

Lots of visitors also stay at the We Wai Kai campground annually, as well as the Tsa-Kwa-Luten Lodge and RV Park, which is currently closed until June 30, he said.