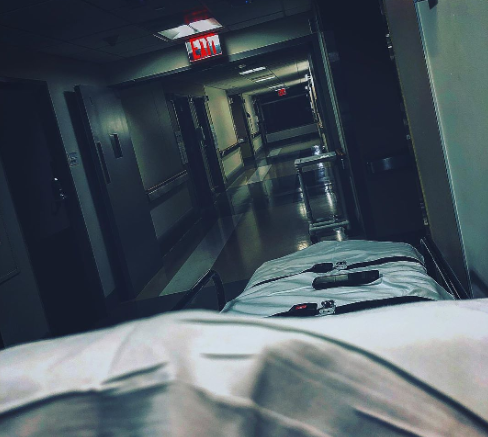 Dr. Lorna Breen dedicated her life to saving others.

As the medical director of New York-Presbyterian Allen Hospital’s emergency department in northern Manhattan, Breen worked on the front lines of the fight against coronavirus in the city that has become the epicentre of the deadly pandemic, with more than 162,000 confirmed cases and at least 12,509 deaths as of Wednesday morning.

Even after coming down with the virus herself, Breen remained determined to get back to work at the 200-bed hospital where she and her colleagues provided care to as many as 170 COVID-19 patients a day. But when she did recover and return to work, the 49-year-old ER doctor found herself struggling to make it through her regular 12-hour shifts.

After the hospital gave her a leave, Breen decided to go to her family’s home in Charlottesville, Va., to recuperate.

Instead, that’s where she died.

Following a call for medical assistance on Sunday, Breen “was taken to UVA Hospital for treatment, but later succumbed to self-inflicted injuries,” Charlottesville Police Department spokesperson Tyler Hawn said in a statement Monday.

Her father, Dr. Phillip Breen, told The New York Times that his daughter had no history of mental illness, but said when he last spoke to her, she seemed “detached” as she described how distressing it was to have to watch so many patients die, including some who never even made it out of the ambulance.

“She was truly in the trenches on the front line,’’ he told the Times. “She tried to do her job, and it killed her.”

Her father described her as a “hero” and said her death was yet another tragic “casualty” of the pandemic, a sentiment that was echoed by Charlottesville Police Chief RaShall Brackney.

"Front-line health-care professionals and first responders are not immune to the mental or physical effects of the current pandemic," Brackney said in a statement Monday.

Front-line health care workers bear constant witness to the human toll of the #coronavirus pandemic. And all too often, they become part of it.

"Personal protective equipment (PPE) can reduce the likelihood of being infected, but what they cannot protect heroes like Dr. Lorna Breen, or our first responders, against is the emotional and mental devastation caused by this disease," she added.

In New York City, as in other hard-hit locations, health-care providers have been forced to work exhausting hours, often in overcrowded and under-resourced settings, with no clear end in sight, all while dealing with the fear of exposing themselves or their families to the virus. Without adequate protective gear, some New York City doctors describe going to work every day as a “suicide mission.”

At the same time, as hospitals have filled up with sick and dying patients, doctors have been left with the burden of making excruciating decisions about rationing life-saving medical equipment and watching as their colleagues fall ill and even die from the virus.

These front-line health-care workers bear constant witness to the human toll of the pandemic. And, all too often, they become part of it.

Two days before Breen’s death, 23-year-old Bronx EMT John Mondello fatally shot himself following weeks of high-pressure work as a first responder. Mondello was based at EMS Station 18, which handles some of the highest 911 call volumes in the city.

“He told me he was experiencing a lot of anxiety witnessing a lot of death, he’d feel it was a heavy experience when he’d fail to save a life,” one of Mondello’s friends told the New York Post.

These back-to-back deaths by suicide are a tragic reminder of the secondary crisis mental health professionals have been warning about — a crisis that is likely to hit front-line health-care workers especially hard.

“The worldwide COVID-19 pandemic, and efforts to contain it, represent a unique threat, and we must recognize the pandemic that will quickly follow it — that of mental and behavioural illness — and implement the steps needed to mitigate it,” Dr. Sandro Galea, of the Boston University School of Public Health, and colleagues wrote in an April article in JAMA Internal Medicine.

A separate article, published this month in JAMA Psychiatry, warned that the stress, trauma, and isolation associated with the coronavirus pandemic may create a “perfect storm” among medical professionals, many of whom are already at an increased risk of death by suicide.

With an average of one physician dying by suicide every day, doctors have the highest suicide rate of any profession. Compared to the rest of the population, physicians are more than twice as likely to die by suicide, and those working on the front lines of the battle against COVID-19 face unique stressors that may further increase their risk.

In China, front-line health-care workers who treated COVID-19 patients were found to have a significantly increased risk of developing “unfavourable mental health outcomes,” with about half reporting elevated symptoms of depression and anxiety, and more than 70 per cent experiencing significant distress.

Italy, which has struggled to protect its health-care workers amid shortages of basic supplies and PPE, has reported multiple deaths by suicide among nurses. Earlier this month, Carlo Palermo, head of Italy’s hospital doctors’ union, tearfully told reporters about the severe psychological trauma caused by the pandemic, saying: “It’s an indescribable condition of stress. Unbearable.” The Italian news agency ASNA reported on one of the deaths, noting the nurse “had been living with heavy stress out of the fear of having infected others.”

Deaths by suicide among health-care providers have also been reported in Iran and Indonesia.

The causes of physician suicide are complex, but dealing with patient deaths and the associated feelings of failure, helplessness, and hopelessness appear to play a role in many cases, according to Dr. Pamela Wible, an Oregon-based family medicine doctor who runs a suicide prevention hotline for physicians and medical students.

“Patient deaths hurt doctors. A lot. Even when there's no medical error, doctors may never forgive themselves for losing a patient,” Wible wrote in a 2018 Washington Post article describing more than 750 physician suicides she documented between 2013 and 2018.

Wible calls death by suicide an “occupational hazard in medicine,” noting certain specialities, such as emergency medicine, carry a particularly high risk of “on-the-job PTSD” and, in some cases, death by suicide.

Although dealing with patient deaths is always difficult, the circumstances of the coronavirus pandemic are uniquely challenging and have left many health-care providers feeling powerless and guilty about not being able to do more, said Dr. Seth Norrholm, associate professor of psychiatry and behavioural neurosciences at Wayne State University School of Medicine in Michigan.

“What often leads to suicidality is a sense of loss of control and guilt,” Norrholm told the National Observer.

Doctors often cope with the death of patients by “falling back on their confidence and competence, which provides a buffering effect,” he said.

Furthermore, Norrholm said, the sheer volume of critically ill patients combined with a lack of necessary resources and treatments mean that many doctors are left to deal with a mounting death toll and very few positive patient outcomes to rectify it in their minds.

“It’s one thing to say, ‘I lost this number of patients this week, but look how many I helped,’” he explained. But when doctors don’t have those success stories to keep them going, it creates a psychological imbalance that “sets the table for some really bad outcomes, including suicidality,” he warned.

Based on the experiences of health-care providers who treated patients during the SARS epidemic, some mental health professionals are predicting that suicide rates could increase by as much as 30 per cent in some states, with doctors, nurses, and first responders bearing the brunt of the “aftershock.”

For most medical professionals, life-or-death situations are not unfamiliar territory. Doctors are trained to deal with these situations by providing treatment, performing surgery, or taking other actions to save lives. But they’re not trained to deal with death, especially at the scale they’re seeing it right now, nor are they trained to go to work every day while fearing for their own lives.

“The ER felt like a battlefield. A living nightmare,” said Dr. Anna Podolanczuk, a pulmonologist at New York-Presbyterian Hospital who worked with Dr. Breen during the peak of the pandemic in New York City.

For the tens of thousands of health-care providers like her who’ve spent weeks working in conditions that have been likened to a “war zone,” the psychological consequences are likely to be enduring — and in some cases, they could end up being as deadly as the disease itself.

“Let’s remember that many front-line workers will keep reliving this nightmare long after this is over,” Podolanczuk wrote on Twitter. “COVID-19 kills in many ways.”

A very sad story, but it

A very sad story, but it underlines a reality we may be avoiding as in Canada we move to re open our economies. We've been incredibly lucky in our numbers........which have yet to overwhelm any of our provincial health care systems, if I'm not mistaken.

Other locations haven't been so lucky.......and not being able to imagine the working conditions in places like Italy, or New York........may lead us to under estimate this new virus...........and its long term consequences on all of us, particularly those of us on the front lines.

As Trudeau said of gun violence...'thoughts and prayers are not enough'........so for our front line workers, 'thanks and banging pots' seem inadequate after reading this story.

Thanks for publishing it. I'm reminded of the Leap Manifesto and its call to 'invest in the non carbon economy' of health and education..........many brave men and women work there......and they are too often undervalued.

When I watched an interview on CBC a couple of weeks ago, with an emergency first responder in New York....and learned that brave young man was risking his life for $37,000 a year....the shame of privatized medicine seemed glaring.

We need to change our priorities..........and do that for longer than this lockdown........a national conversation about what it is we really 'value' is long overdo. Hopefully, this virus will convince us that change has to come, whether some current power brokers like it or not.