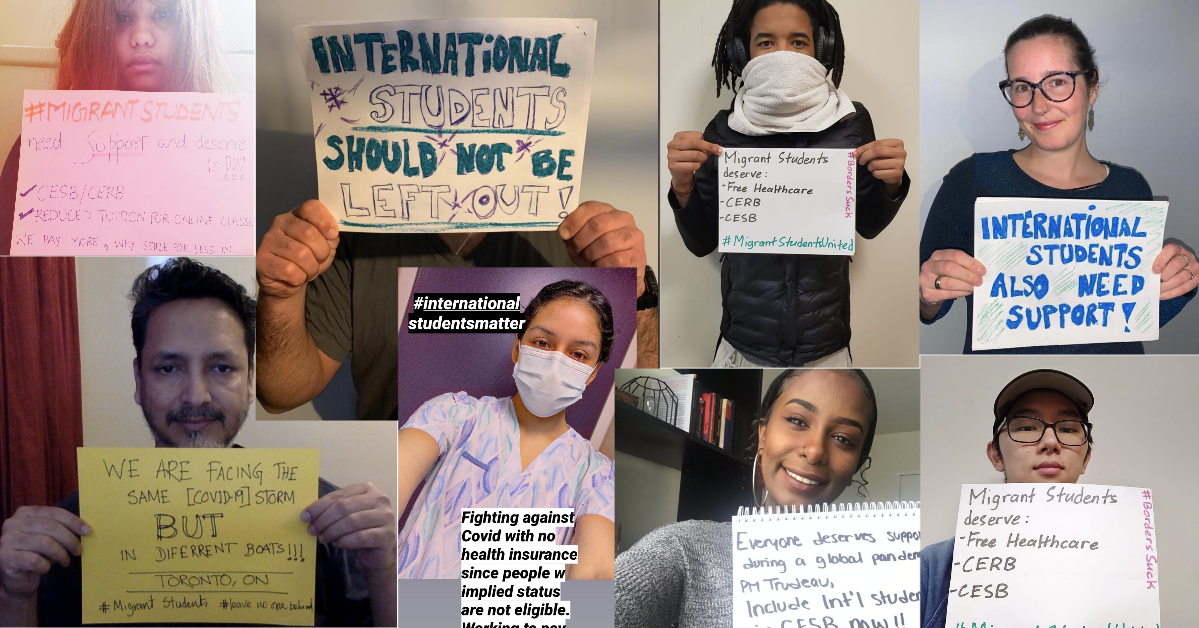 Ian Tian is a postgraduate student at the University of Toronto who came to Canada from China three years ago.

When the COVID-19 pandemic first broke out in his home country, he was concerned for the family he had left, but his worries have now migrated with him.

“In normal circumstances, I would have a job in the summer and my funding would kick back in when school returns,” he said. “Right now, I’m using my savings to pay rent and I don’t know if I’ll be able to buy food.”

“It’s quite a struggle,” he said. “I’m very nervous and anxious.”

Tian and some of his friends have turned to food banks to supplement the groceries they can afford to buy. And there is another thing he is worried if he can afford — resuming his studies in the fall.

“I don’t know what is going to happen,” he said. “I’m also worried about my health — what if I get sick, what would my parents do, they can’t come here, who is going to look after me?”

Sarom Rho, who is co-ordinating the Migrant Students United campaign at the Migrant Workers Alliance for Change, said Tian's case is far from unique.

Since the pandemic lockdown began in mid-March, she has referred hundreds of international students to food banks in the absence of other supports.

“It’s quite dire,” she said. “As the weeks (of closures) are growing, there are more and more students who are being hit by the deathly inadequacies of all these systems that are leaving them behind.”

Canadian universities and colleges lean heavily on the higher tuition fees paid by international students. Their absence from classes next year due to COVID-19 complications would strike a major blow to schools’ operating budgets.

The alliance, along with the Canadian Federation of Students, is calling on Ottawa to expand relief efforts — it’s launched a $9-billion aid package — to cover all students.

A petition started by the alliance and the Migrant Students United organising commitee has garnered more than 10,000 signatures.

“If you are not including all students, it’s not perfect,” said Felipe Nagata, president of the federation’s Ontario chapter, who argued all students should get the same amount of financial help as laid-off workers.

“We believe it should be $2,000 (a month), and we believe international students should be included on CESB,” he said.

A spokesperson for the federal employment minister said some international students are eligible for CERB, and noted Ottawa had doubled the amount they could work to 40 hours a week.

“Workers who are not citizens or permanent residents — including international students — may be eligible to receive the benefit if they have a valid SIN (social insurance number), stop working for reasons related to COVID-19 and meet the other eligibility criteria,” said Marielle Hossack, press secretary for Carla Qualtrough.

Critics say that leaves many international students out.

One of them is Aydolu Simsek, who is studying to become an employment counsellor at George Brown College in Toronto.

She can’t graduate without a summer co-op placement, which is unlikely to happen now, and didn’t earn enough last year to qualify for CERB. She has depleted her own savings and was relying on help from her family in Turkey, but her father is now digging into his limited savings after he was forced to close his children’s clothing shop in İzmir.

“As a foreigner, as an international student, it is tough,” she said. “I am looking for a job, but the labour market is very challenging.”

Schools are hurting, too

Universities and colleges in Toronto and across Ontario and Canada lean heavily on the tuition fees paid by international students, which can range between four and six times what domestic students pay. Their absence from classes next school year would strike a major blow to schools’ operating budgets.

The provincial NDP’s post-secondary education critic Chris Glover said it is difficult to estimate just how deep the financial impact will be at this point, but all the universities and colleges he’s been talking to are concerned.

This is due to existing students being unable to continue their studies, and travel restrictions and slower visa processing putting off those who were planning to arrive later this year.

The student union at OCAD University, an art and design school in Toronto, did an informal survey of students early in the pandemic that suggested half of enrolled international students may be unable to return to school for the next academic year.

The NDP’s Glover said international students make up half of the student body for some colleges, mentioning Toronto’s Centennial College by name.

“The hit to their financial plan is going to be massive,” he said. “That’s why the government needs to step in, we need to make sure that our institutions survive this thing, that they come out intact.”

A spokesperson for Centennial said the college has a healthy surplus, due in part to its strong international enrolment, that they can draw on to help cover the expense of shifting more courses online.

"Our fiscal success over the past several years has put us in a better position to weather the present storm," spokesperson Mark Toljagic said.

Centennial had 11,472 full-time international students in its winter semester, making up 54.6 per cent of total enrolment, he added.

Toljagic said it was too early to say how much of a decline in enrolment the college might face, and that it was working on expanding online versions of several popular programs that will start in late May.

He and the Ontario NDP are calling on the provincial government to reverse its $670-million-a-year cut to the Ontario Student Assistance Program (OSAP), which equates to a 30 percent reduction in available student aid.

“To maintain that cut (to OSAP) this year, when students are in such dire circumstances, is unconscionable,” Glover said.

The NDP also wants the province to cover the $440-million reduction in institutional funding ($360 million from universities and $80 million from colleges) that Ford’s government created when it made an unfunded reduction of tuition fees last year.

Glover also wants to see the conversion of student loans to grants, and an expansion of such assistance to help students hit hard by the pandemic.

“You’re compounding disadvantage when you load low-income students with debt,” he said.

A spokesperson for Ross Romano, the provincial minister for universities and colleges, said he is in daily conversation with institutions “to discuss short-term relief and the path to vital sustainability.”

Ciara Byrne said the changes to OSAP introduced by the Ford government “have worked to ensure that OSAP is sustainable for generations of students — five, 10, 15 years down the road.”

The NDP’s Glover said the situation was particularly difficult for students from abroad, who are unlikely to have family nearby they can lean on during the crisis and are struggling without access to federal relief.

“Now they are stuck here through no fault of their own. Many of them can’t work. As a moral obligation, we should provide them with some supports to help them get through,” he said.

“We shouldn’t be leaving anyone unhoused or unfed,” Glover said. “I’ve heard of international students cramming into smaller and smaller quarters because they can’t afford rent.”