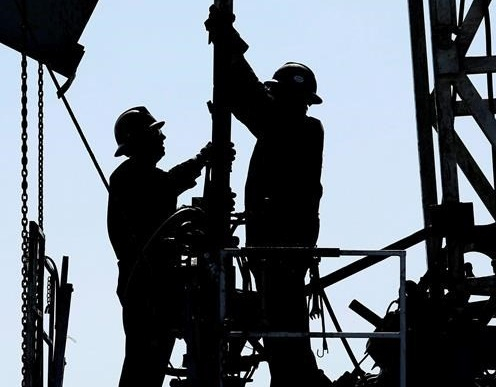 Image of workers in the Canadian oilpatch.
Previous story
Next story

Following media reports that the federal government was considering a multibillion-dollar bailout of the oil and gas sector, a broad coalition of faith, labour and environmental groups, representing over 1.3 million Canadians, came together in an open letter to the prime minister calling on his government to change course.

While there was no direct reference to a Big Oil bailout in a COVID-19 relief package that was passed by Parliament, Finance Minister Bill Morneau has clearly signalled that a bailout is still very much in the works.

No one can deny the industry is facing difficult times with the collapse of the global price for oil. However, at a time when every corner of the Canadian economy is reeling from the disruption caused by the COVID-19 pandemic, many people I know are worried about being laid off, or how they are going to make next month’s rent or mortgage payment.

It's more than fair to ask: Should we let a group of billionaire oilpatch CEOs skip to the head of the line for government support?

It is also undeniable that laid-off workers from the oilpatch need support right now. As do workers in many other sectors of the economy that are facing sudden and unprecedented disruption. However, it is becoming clearer and clearer that the most effective way to support workers and their families is not by giving their former employers government handouts, but by supporting workers directly.

Well before COVID-19, the Trudeau government committed to a Just Transition Act based on the understanding that workers are in need of protection as the world moves away from fossil fuel extraction. The current crisis in the oilpatch is not caused by a lack of pipelines, or Canada’s environmental laws, as some would have you believe.

The problem is much more serious — simply put, the oilsands are not economically viable in a world where OPEC is not artificially propping up the global price for oil.

Since it was founded, the primary role of OPEC was to limit the global supply of oil, so member states could get the best possible price for their exports. But since 2014, they have pursued a new strategy: defending their market share.

With production rapidly growing in non-OPEC states, including the United States and Canada, OPEC decided in 2014 to increase production to keep these new sources of oil out of their key markets.

When, earlier this month, OPEC couldn’t come to an agreement with the Russians, who had been co-operating with the cartel since 2017, the Saudis decided to punish them by turning on the taps and dropping the price of oil to 17-year low.

"It's more than fair to ask: Should we let a group of billionaire oilpatch CEOs skip to the head of the line for government support?"

Unfortunately, the oilsands are more exposed to drops in the global price of oil than other forms of oil. The oilsands have higher production costs, higher refining costs and higher transportation costs than conventional crude. Meaning that most oilsands producers are just not profitable at current prices. And while the Saudis can produce oil for as little as US$3 a barrel, producers in the oilsands need a price at least 10 times higher than that just to keep the lights on.

Even as the Saudis appear to be softening the current price war, the oilsands face serious long-term problems. They not only have some of the highest costs in the world to produce oil, they also produce oil with a high sulfur content, which makes it less attractive to refiners, and a 70 per cent higher carbon footprint than conventional crude, in a world increasingly awakened to the threats of climate change. The oilsands are a commodity with high costs and potentially diminishing demand, and no government bailout can change those basic facts.

Let's take a look back at the recent history of Big Oil bailouts and their impacts on employment in the oilpatch. The current bust cycle in the patch began in 2014, when, as a harbinger of things to come, the Saudis and their OPEC partners increased production and brought the global price of oil to below US$50/barrel. Canada’s federal government and the Alberta government responded by increasing subsidies, tax breaks and handouts for the oil sector. This is an industry that is already subsidized to the total of $3.3 billion a year by Canadian taxpayers.

Remember 2016? Oil prices fell again, this time slipping to almost US$30/barrel, and tumbled again in 2018. In 2018, the federal government not only gave Alberta oil producers a $1.6-billion bailout package, they also spent $4.5 billion buying the Trans Mountain pipeline, a project which now is estimated to cost taxpayers over $16 billion.

Throughout this same time, we saw production in the oilpatch grow and the big five oilsands producers have continued to pay out billions in dividends to their shareholders. While oilsands producers found a way to take care of their investors, workers who lost their jobs in the 2014 price shock were left behind. Employment numbers have never recovered to anywhere near 2014 numbers, despite the fact that Alberta is now producing more oil than at any time in its history.

Clearly, there is a pattern here: global forces drive down oil prices, Big Oil CEOs lean on Ottawa for a bailout, the federal government writes another big cheque to this already heavily subsidized industry, investors get paid and workers are again left behind.

Along with many Canadians, I am tired of seeing this happen over and over again. Families are suffering because of another oilpatch bust, and it's time we break this cycle. Our federal government needs to bail out the workers of Alberta by supporting them through this crisis and invest in diversifying the province's economy, instead of giving more of our money to a bunch of billionaires.

The majority of layoffs in

The majority of layoffs in the oil industry are the fault of automation, not trade wars or the virus. Work from home mentality plays a role too as you see pictures of empty towers in Calgary.