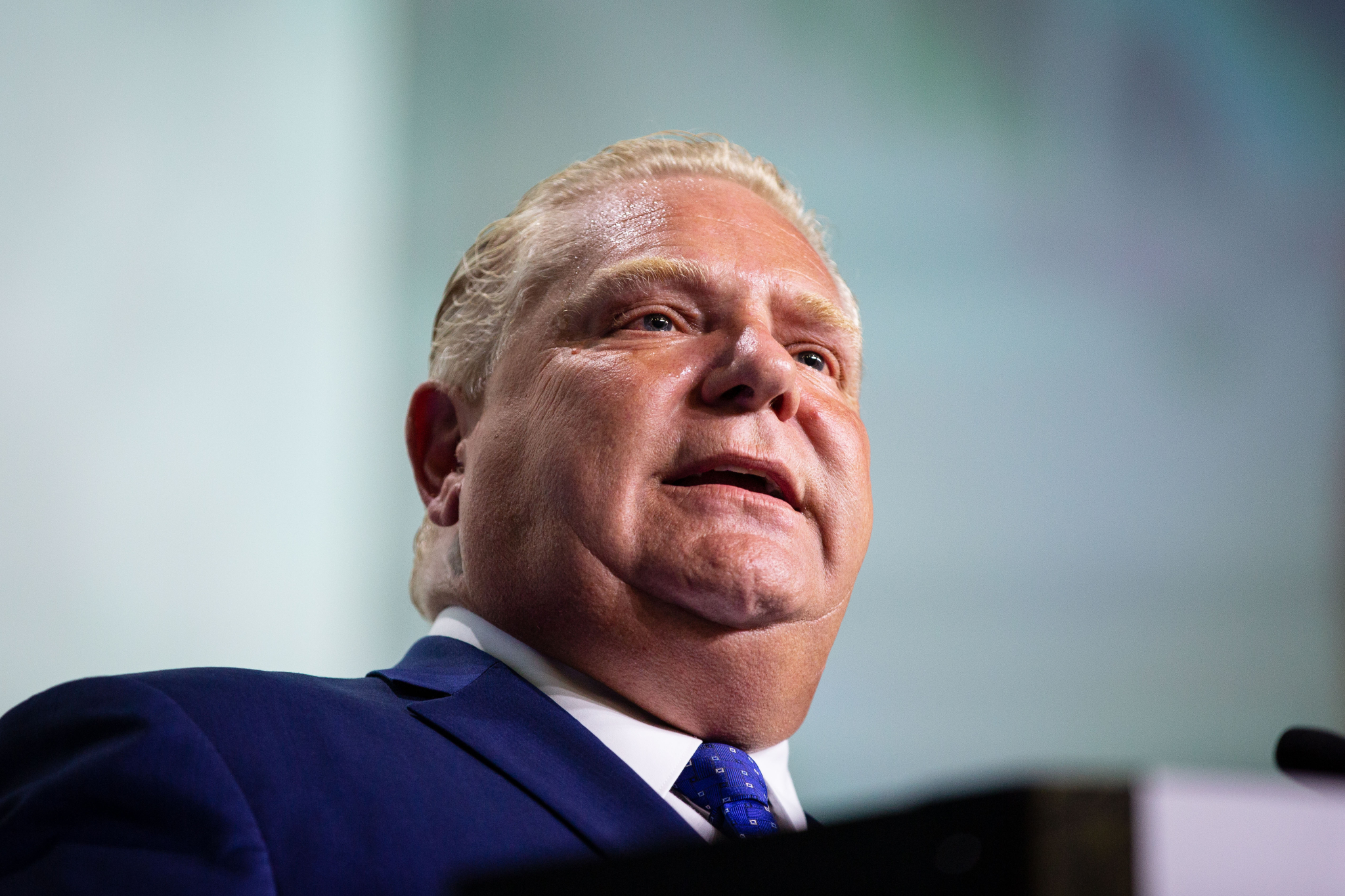 On Monday, the premier celebrated hitting his government’s latest milestone of 16,000 tests per day, a mark it had struggled to meet since testing problems first emerged in March. But the province fell back down to 10,654 tests per day on Tuesday.

“I’m calling them out right now. You’ve got to pick up the pace… I’m not going to name them, you know you who are. Pick your socks up and start doing testing.”

About half of the top officials at the province’s 34 public health units “aren’t even putting the work in as far as I can see,” Ford added.

“We’ve got to hold these people accountable,” he said. “We’re going to have to get on the phone with them and find out what reason, what excuse, they’re going to give us for why they’re not testing.”

Ford’s government has repeatedly set COVID-19 testing goals and failed to meet them. The premier's remarks Tuesday about the testing hangups were a significant departure from statements he made on April 8, when he took responsibility for the problem: “The buck stops here. I’m accountable and I have no problem being held accountable,” Ford said at the time.

Ontario chief medical officer of health Dr. David Williams took a softer tone Tuesday, saying there are plenty of issues at play that could look like lack of will from the outside. Some might be struggling to get testing supplies, while others have been working to get enough staff, Dr. Williams said.

“We will talk to them,” Dr. Williams said, referring to local health units where testing numbers have fallen behind.

“We’re going to help them do whatever they need to do.”

Ontario Premier Doug Ford previously took responsibility for the province's COVID-19 testing issues on April 8. But on Tuesday, he said half of Ontario's public health units need to "pick your socks up and start doing testing.” #onpoli

Last week, Dr. Williams said the province has the technical capacity to process up to 19,000 tests per day.

As many as half of people with COVID-19 are asymptomatic, but still capable of spreading the virus, global research shows. It can be difficult to get a clear picture of where the virus is spreading without a robust and widespread testing program, which experts say is crucial for any jurisdiction that wants to begin reopening.

In a statement, Ontario NDP Leader Andrea Horwath said the blame should fall to Ford, not local officials, as the province controls funding for public health units.

“It was shocking to hear Doug Ford throw public health leaders under the bus,” the statement said.

Good communication between politicians, provincial health officials and local health units is crucial for tackling a crisis such as COVID-19, said Timothy Sly, an epidemiologist and professor emeritus at Ryerson University. And this week, it has seemed that Ford’s messaging ⁠— both on the issue of public heath units, and on allowing cottagers to return to their seasonal properties ⁠— has contrasted with statements from Dr. Williams, who says the curve of COVID-19 cases has not begun a definite decline.

Differing messages from official to official can be confusing for the public, Sly added.

In Ontario, much of the COVID-19 testing is overseen by 34 local public health units, which are led by a chief medical officer and are accountable to local health boards.

Other provinces use different systems ⁠— in Alberta, for example, public health is administered by one centralized agency that is organized into five geographic zones. On Tuesday, Ford said his government will be looking at moving to a different, likely more centralized model, once the pandemic is over.

“It’s a lot easier to hold one person accountable than 34,” Ford said.

Ford’s government had previously been working on a review of public health units, but that review is now on hold due to the pandemic, Dr. Williams said.

Centralized public health systems are a more common approach in Canada than the one Ontario is currently using. Such a system could make it easier to coordinate crisis response, Sly said.

“That’s something for the post-mortem, once all this is done,” he added.

Parks could reopen before May long weekend

On Tuesday, Ford also hinted that public parks that were shuttered as COVID-19 worsened may be able to reopen by the May long weekend.

The premier publicly mulled the idea Monday of allowing cottagers to go to their seasonal properties for Victoria Day, which is May 18 this year, if COVID-19 case numbers significantly decline.

On Tuesday, in a response to a question about what could be done for apartment dwellers who can’t access parks or afford a second home to escape to, Ford said Ontarians should be able to use public green spaces soon.

"We'll have some good announcements moving forward this week,” the premier said.

Ontario has a reopening plan, but unclear when it will begin

Before he starts pointing

Before he starts pointing fingers, he should be reminded who cut funding and reorganized public health when they took office.

I heard on CBC this morning

I heard on CBC this morning from Dr Fisman that public health units do NOT do testing , the province does? Who is right? and does that negate the derth of scientists in public labs after Doug fired 25% of them and cut $50 Million from public health last year?? Where are the lab techs supposed to come from? they had to go get other work last year? Doug is getting back to being doug and pointing the finger to sound like he knows what he is talking about. Like the "6 Million dollar man at Hydro" How did that work out for taxpayers? oh ya we dropped a few billion in revenue because of his interference.

After the SARS event our

After the SARS event our governments of all levels made detailed pandemic management plans.

These plans apparently did not include measures to stock sufficient PPE, limit travel from the origin of the outbreak or to create a meaningful testing infrastructure.

The most critical test to employ is the antibody test so we can know how far this virus has actually spread through the population and whether an individual has acquired natural immunity.

I guarantee that the antibody test is the last test we will ever see, as it will irrefutably prove that this entire pandemic event is not the health crisis it has been made out to be.

From what we've experienced so far, these pandemic plans apparently did include measures to destroy the economy, spread fear and bad information through the media and remove all civil liberties from the citizens of Canada.

We are told to expect that this radical societal re-write that has been forced upon us will become our new normal.

This has never been about a virus. This is about the future we can expect for ourselves, our children and grandchildren.

It's time to decide if we want to live in the true North, strong and free, or in a China style repressive state. It is not acceptable to me to live in a police state where all interactions are monitored and controlled.

This is not a future I will accept for myself or for our future generations.

My grandfather served in Europe during WWII. That was a war to defend the freedom that we have enjoyed since.

This time the battle for freedom is on our doorstep.