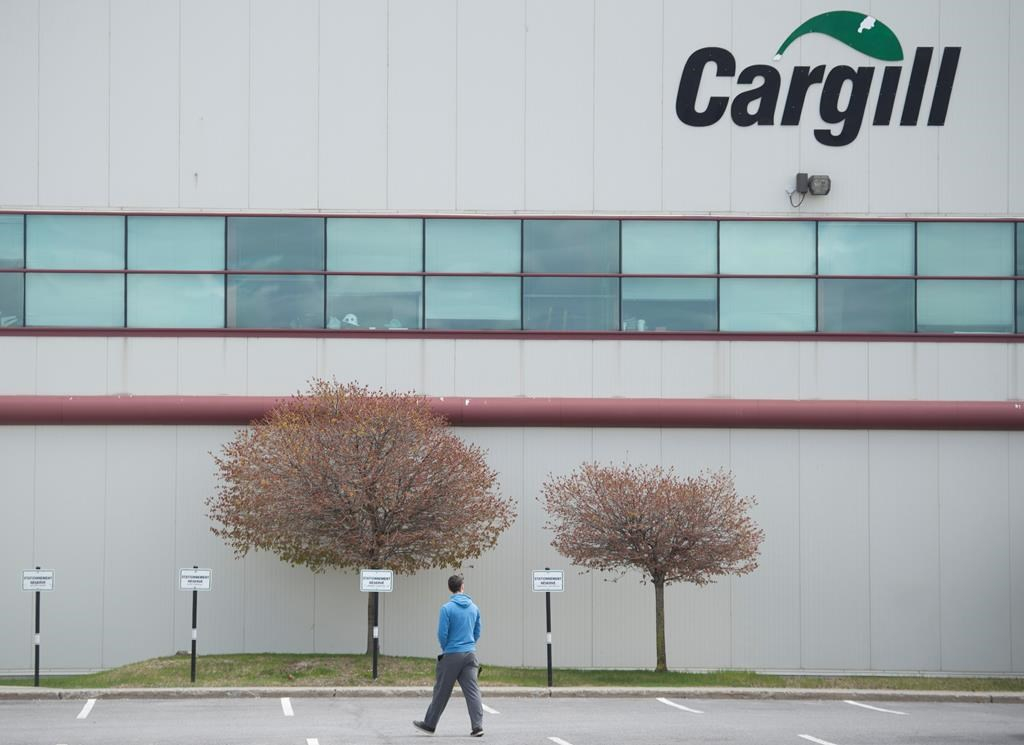 A man walks into a Cargill meat processing factory in Chambly, Que., south of Montreal, on Sunday, May 10, 2020. File photo by The Canadian Press/Graham Hughes
Previous story
Next story

Tens of millions of federal dollars aimed at helping food processors deal with a rash of COVID-19 outbreaks might not move until the end of September, and there are no details about what the requirements will be to qualify.

It is also supposed to help upgrade and reopen shuttered meat facilities that have had to close after becoming infected by COVID-19.

On Sunday another Cargill meat-processing plant south of Montreal announced it will temporarily close its doors after at least 64 workers tested positive.

That is the second temporary closure of a Cargill plant in recent weeks. One in High River, Alta., closed after about 350 cases of the novel coronavirus were linked to it. The number eventually rose to 1,500, including nearly half the plant's 2,000 workers. The plant has since re-opened.

Workers in meat-packing plants often work shoulder to shoulder slaughtering and butchering animals for food. Many of them also share living quarters and transportation to and from work.

Cargill Ltd., the Canadian subsidiary of an American-based multinational, has said it has installed transparent shields between workers' stations where possible, supplied protective gear, and put on shuttle buses modified for safety so workers don't have to carpool. A company representative didn't immediately return a call from The Canadian Press Monday.

Details about who will have access to the federal funds to improve conditions at food plants, and what the requirements will be, are still being worked out, according to Agriculture and Agri-Food Canada.

"The Emergency Processing Fund is being finalized and we will continue our consultations with provinces, territories and stakeholders as the parameters of the program are developed," the federal department said in a statement in response to questions Monday.

As for when the money is expected to doled out, the department said that will happen "no later" than Sept. 30.

Funds to fight COVID-19 in meat plants might not move for months, feds say

In the meantime the Canadian Food Inspection Agency will order non-meat inspectors into meat plants under threat of discipline, according to the union representing agriculture workers.

The agency has instructed some of its non-meat-inspection staff to train up to be deployed to meat slaughter plants that have seen outbreaks of COVID-19, the Agriculture Union said in a statement Monday, asserting that the federal food-safety agency will treat refusals as acts of insubordination.

The union, which represents more than 6,500 employees of federal agricultural agencies, called the approach "heavy-handed" and "unacceptable."

"CFIA is ordering its staff to work in facilities that obviously are not safe, and without the proper personal protective gear," president Fabian Murphy said in the release.

The union says 18 of 37 inspectors working at the Cargill plant in High River have tested positive for the virus, and so have three of six inspectors at another plant.

In a statement, the CFIA said the agency follows national and local public health advice and obeys protocols put in place at the plants to mitigate risk of exposure to the virus.

"When cases of COVID-19 occur in a food processing establishment, the CFIA works with local public health authorities to determine the level of risk of exposure for CFIA employees, and their need for self-isolation and/or referral to health services for testing," the agency said.

The statement also noted that inspectors complete a self-assessment before and after each shift related to their health, and masks and face shields are available.

"We fully recognize the health concerns of workers in certain meat plants. As with all essential workers — proper measures must be in place, if workers can continue to provide essential services to Canadians during these critical times," the minister said.

Working conditions for employees in the plants are a provincial responsibility but the federal inspectors are there to make sure the food they produce is safe for consumers.

"We need the prime minister or a senior elected person to intervene to ensure their own staff, federal inspectors are safe," Murphy said.

The Agriculture Union says it's reached out to ministers on the matter but has not had a response.

The union also raised concerns the CFIA has assigned inspectors to more than one processing facility, which could encourage the spread of the virus from plant to plant.

By Morgan Lowrie | News, Politics | May 11th 2020
Coronavirus in Canada