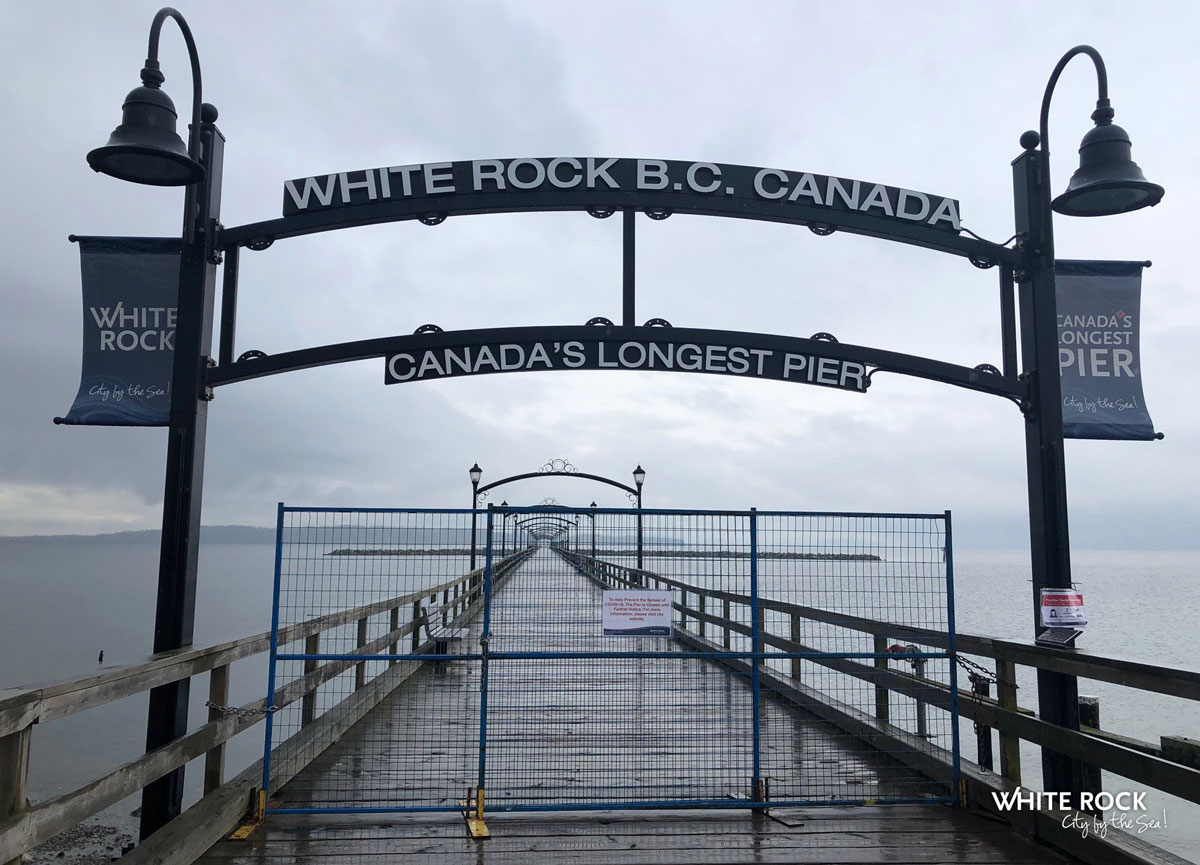 The White Rock Pier, a seaside attraction in the B.C. city, closed temporarily in March due to COVID-19. City of White Rock Facebook photo
Previous story
Next story

B.C. is preparing to enter the second phase of its economic reopening plan following the Victoria Day long weekend, while some businesses in the province wait to hear more details about any future plan to reopen the Canada-U.S. border to tourism.

For the owner of one restaurant in White Rock, the idea of the B.C.-Washington border opening again is something that would negatively affect customers.

Most of the clientele are seniors who live nearby, the owner said, and their continued business depends on their confidence that the area remains relatively free of COVID-19.

“We’re a bit worried about it. We’re very close to the border,” said the owner who declined to give their name. “This area is very safe and my clients feel very safe. But if the border opens, I don’t know what will happen. So I think we’re worried.”

For other businesses in the tourism and hospitality industry, the uncertainty over when the border will reopen is making it hard to plan for the future.

Muriel Protzer, senior policy analyst for B.C. for the Canadian Federation of Independent Business, said it is very difficult for right now for those businesses to figure out if they should even open at all this season.

“While we do still have quite a sufficient flow of goods coming from and to our neighbours down south, what I think is really going to hurt businesses going forward is that tourism industry,” said Protzer.

“Those industries so heavily rely on people coming over the border, visiting Metro Vancouver, or wherever else in B.C. that you’re visiting.”

The entire Canada-U.S. border remains closed to foreign nationals including U.S. citizens for all non-essential travel, including tourism or recreation. That includes Americans who want to check on cottages or seasonal homes in B.C., the Canada Border Services Agency reminded travellers on Thursday.

Prime Minister Justin Trudeau said Wednesday that “every country” recognizes that its control over its domestic public health situation is “vulnerable to international travelers.”

For the owner of one restaurant in White Rock, the idea of the B.C.-Washington border opening again is something that would negatively affect customers.

As Canada continues to manage the spread of COVID-19, he added, “we want to make sure we’re not becoming vulnerable from travelers arriving elsewhere.”

Over 1.4 million people are infected with the coronavirus in the U.S. and over 85,000 have died. Washington state was reporting 16,790 confirmed cases as of Thursday.

“Everyone is coming into my store and asking, ‘Do you have any people who have tested positive?’ and I say no, which is why people feel safe, right?” said the White Rock restaurant owner.

“But if the border opens, since the situation is very bad in the U.S., I think they will worry about it.”

Meanwhile, B.C. Premier John Horgan has said Phase 2 of the province’s Restart Plan could kick off next week.

That means everything from allowing “small social gatherings” to opening more health services, stores and restaurants, as well as some sports and cultural sites like museums.

On Thursday, BC Parks reopened a range of trails, beaches and picnic areas for day use.

But Horgan has also cautioned that not everything would be immediately ready to go on Tuesday. This week, the province extended its state of emergency for another two weeks, indicating the government believes “we are far from out of the woods," according to Horgan, in fighting the coronavirus across the province.

Provincial health officer Dr. Bonnie Henry asked B.C.ers to avoid travel during the long weekend. There were 15 new cases of COVID-19 announced on Thursday, and across the province, there were 372 active cases, 58 of which were in hospital 12 in intensive care.

In the four phases of B.C.’s reopening plan, only the fourth phase relates directly to border crossers, as it refers to opening up “international tourism.” But unlike Phase 2 and Phase 3, the fourth phase has no date range connected with it.

Protzer said a survey of CFIB members showed 25 per cent felt like they were being “left behind” in the economic reopening plan. She said the results speak to the fact that, while it was important for a plan to be in place, a lack of dates creates further uncertainty for business owners.

As for border towns, she said there was a worry from everyone, not just business owners, about whether it was safe to reopen the border.

“I think that’s where we really need to leave this in the hands of the provincial health officer, their concern for the health and safety of Canadians is at the forefront of their minds,” she said.

Editor's note: This story was updated on May 19, 2020 at 9:44 a.m. ET to indicate that the number of cases in Washington state as of Thursday were confirmed, not active cases.