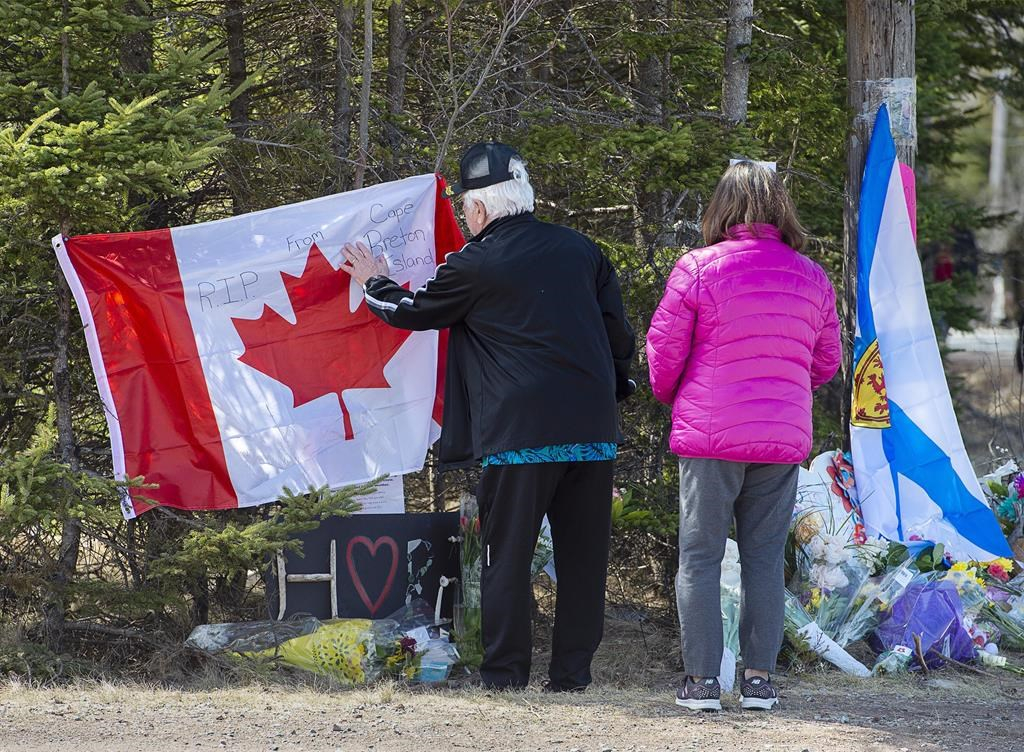 A couple place a flag at a memorial in Portapique, N.S. on Wednesday, April 22, 2021. File photo by The Canadian Press/Andrew Vaughan
Previous story
Next story

A newly released document details warning signals of paranoid behaviour and unusual stockpiling of guns and gasoline by the man who went on a rampage that killed 22 people in Nova Scotia last month.

In the court document made public Tuesday following an application by media organizations, seven witnesses who'd encountered Gabriel Wortman either recalled him talking about owning guns or had seen guns at locations including his clinic in Dartmouth, N.S., and his property in Portapique, N.S., dubbed "the warehouse."

The 40 pages offer disturbing glimpses of his rural property, located 44 kilometres west of Truro, where the 51-year-old denturist entertained friends and kept a well-stocked bar and a collection of motorcycles.

One witness, who met a Halifax Regional Police officer to give a statement on April 19, described the gunman as an abusive "sociopath" who'd kept a rifle by the fireplace that was "like a machine gun."

An acquaintance who visited told police that Wortman had installed a security system in his warehouse, though he also showed off his guns and police cars to visitors.

Police have previously stated that beginning on the night of April 18, the killer used accelerants to light fires in five communities and murdered people with four semi-automatic weapons he wasn't licensed to own as he drove about in a replica police car. He was killed by police before noon on April 19.

In the court documents, witnesses offered additional figures and details — including two estimates that Wortman had bought $800 worth of gasoline.

Emails from the killer written four days before the mass shooting provided no hint of what was to come.

"I am currently residing at my cottage in Portapique. I am enjoying this prelude to retirement, unfortunately not able to get to ...," says one message, the last word removed by the Crown lawyers who released the document.

However, other information gathered by police paints a darker picture of the killer's state of mind.

A former colleague told police officers the gunman was "paranoid" about the COVID-19 pandemic, saying he'd experienced "a mental breakdown" while discussing a deed for a property in Portapique.

The witness was among those who said the killer had talked about various types of guns, assault rifles and handguns in the past.

The witness also said Wortman "had been disturbed and that he was severely abused as a young boy," adding he was "very smart, cheated and was a psychopath" and had abused a person whose name is removed from the document.

Two other witnesses told police Wortman had been abusive in the past, though the context, dates and details are not in the court document.

Another witness gave an undated statement to the Halifax Regional Police saying he had met the gunman in 2011, calling him "controlling" and "paranoid." The witness said Wortman had described ways to get rid of bodies using burning and chemicals.

In addition, on April 20, a person who sold supplies that Wortman used to create an RCMP insignia on his replica vehicle described how Wortman had purchased several sheets of reflective blue vinyl.

The witness said that the gunman "had a police cruiser that he bought at an auction and wanted to do it up like a police car." He said he told Wortman "he would get in trouble for driving the car with decals, and Gabriel said that he knew and it would be illegal."

According to information provided by the gunman's common law spouse, the April 18-19 violence began when they were having drinks at his warehouse in Portapique and had been talking to friends on a video chat.

Police have previously stated that the female partner was assaulted but managed to escape to the woods, where she hid through the night before speaking to police about Wortman at about 6:30 a.m. on April 19.

The document adds her comments that Wortman poured gasoline in his cottage and warehouse and she observed that there were several firearms in the front seat of the replica police car he was driving.

She described how he had a relationship with someone in the RCMP and had one of his uniforms, though it didn't fit. "He had a fluorescent yellow jacket and he would put it in the front seat to make it look like he was a police officer," she told investigators.

In the reasons given for seeking the search warrant, RCMP Sgt. Angela Hawryluk describes how the first two officers to arrive on the scene on the night of April 18 encountered a wounded witness who told them he'd been fired upon by a man in uniform driving what they thought was an RCMP vehicle.

This witness, who is not named, told the two officers he and another person noted a building on fire in Portapique and a police vehicle in a nearby blue building that was burning as well. They had believed the police vehicle was an RCMP officer responding to the emergency.

When they approached, Wortman opened fire on them with his handgun, and they fled.

Minutes later, when they met RCMP officers arriving on the scene, the witness told them his "first suspicion was that it (the gunman) was ... Gabe (Wortman) because his barn was on fire and he had a look-a-like Taurus that he was calling a police car."

The witness told the police officers the replica vehicle had a police number on it. "The one (the car) that we saw parked was definitely badged," the witness is quoted as saying.

The warrant was sought on April 24 to search various buildings owned by Wortman, noting they had been burned and police would be seeking the assistance of an anthropologist to search the sites.

Large portions of the document, including the identities of witnesses, have been redacted. It was unsealed after a media consortium, including The Canadian Press, went to court. The consortium will learn the reasons for the Crown's redactions in future court hearings and will have the opportunity to contest them.

The document confirmed previous police statements that Wortman didn't have a licence to own the firearms he used, and added that he had never had a valid firearms licence.