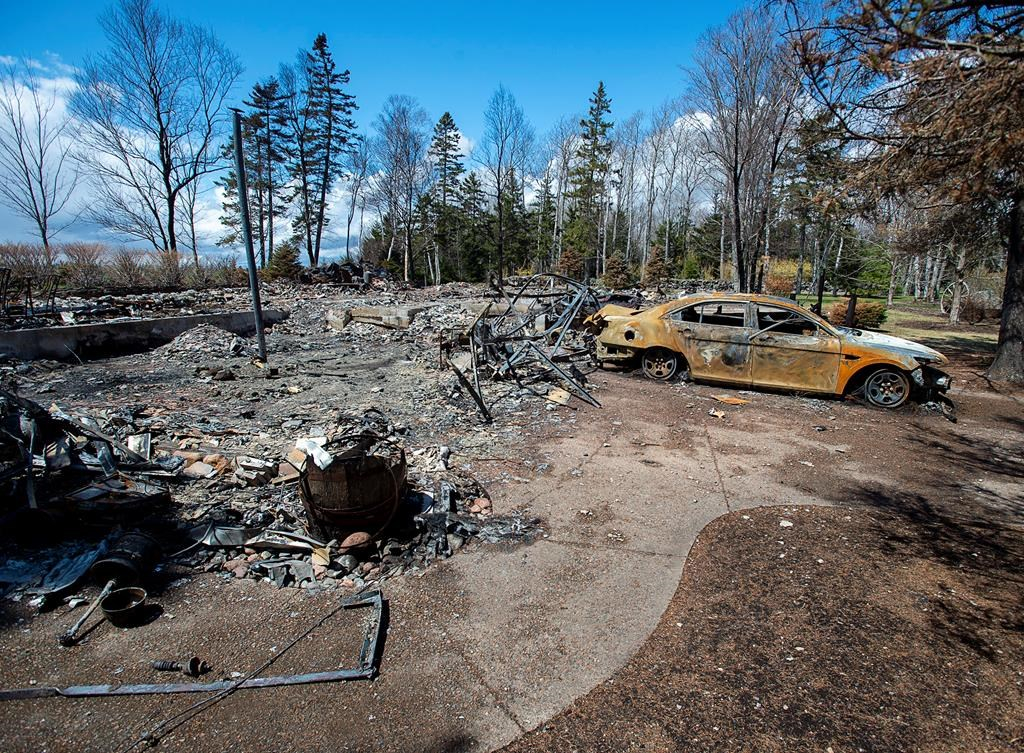 A fire-destroyed property registered to Gabriel Wortman at 200 Portapique Beach Road is seen in Portapique, N.S. on Friday, May 8, 2020. File photo by The Canadian Press/Andrew Vaughan
Previous story
Next story

A former neighbour of the gunman behind last month's mass shooting in Nova Scotia says she reported his domestic violence and cache of firearms to the RCMP years ago and ended up leaving the community herself due to fears of his violence.

Brenda Forbes said that in the summer of 2013, she told police about reports that Gabriel Wortman had held down and beaten his common law spouse behind one of the properties he owned in Portapique, a coastal community west of Truro.

Domestic violence is being examined as a key aspect of the mass shooting, as police have said the rampage began on the night of April 18 after the gunman argued with his common law spouse and restrained and beat her before she managed to escape into the woods.

He went on to kill 22 people and burn a number of homes before police shot and killed him outside a gas station in Enfield, N.S.

Forbes said her first awareness of Wortman's domestic violence was shortly after he moved to Portapique in the early 2000s, when his partner came to her door and asked for help.

"She ran to my house and said Gabriel was beating on her and she had to get away. She was afraid," said the 62-year-old veteran of the Canadian Forces.

Forbes said she encouraged her neighbour to seek help but recalled that she was frightened of her partner and of repercussions of going to police due to threats he'd made against her family.

She said that in 2013 she learned Wortman had been seen hitting his partner behind one of his properties.

"He had her on the ground, was strangling her .... He was beating on her," she said of the account she heard, saying there were three male witnesses.

"On that incident, I called the RCMP and I told them what happened, and I said he has a bunch of illegal weapons, and I know because he showed them to us," said Forbes, who has since moved outside the province.

She said that in response to her complaint the RCMP interviewed her while she was working at a cadet camp in Debert, N.S., and she retold the story. She said she encouraged one of the three witnesses to give his account to police, but he refused, saying he feared violence from Wortman.

Forbes, who first told her story to the Halifax Examiner, said it upset her that police seemed unable to take firmer action on her complaint.

"From what I got from the RCMP, because (the partner) would not put in a complaint, as she was scared to death, they basically said, 'There's not much we can do. We can monitor him but there's not much else we can do,' " she said.

The Canadian Press emailed the RCMP about the prior report of domestic abuse, but a spokesperson wasn't immediately available for comment.

RCMP Supt. Darren Campbell said during a news conference last month that investigators "have spoken to witnesses who have provided information to us about prior assaults; those are all things that we are dealing with right now."

He has also said that investigators are speaking to the former common law spouse to gain a better understanding of previous incidents.

However, Forbes said she felt at the time the incident should have been more thoroughly investigated.

"If you tell them that he may have illegal weapons, should you not go and check it out?" she asked.

Her husband, who also served in the Canadian Forces, recalled being shown their neighbour's weapons cache.

"He knew I had weapons, being in the military, so he was always one of those guys who had to show others that whatever they had, he had something better," George Forbes said. Wortman showed him firearms, including pistols and a rifle, in the garage, he said.

"We reported that to the police also," he said. Police have said the gunman didn't have a licence for his weapons.

Brenda Forbes said that after she reported the abuse incident to the RCMP's Truro detachment, Wortman became more aggressive towards her.

George Forbes recalled him coming to the front door and threatening his wife. Brenda Forbes said Wortman would drive around their house and park outside the door.

"I was scared. ... Even though I'm military and I know how to use a weapon, that man scared the crap out of me," she said.

She said she and her husband left the area in 2014 out of growing fear and discomfort over Wortman's behaviour.

Linda MacDonald, a founder of Persons Against Non-State Torture, said in an interview that advocates who are trying to reduce violence against women have long seen a connection between hatred of women and mass shootings.

The Truro-based nurse is among the signatories of a recent statement that called for a deeper look at the role misogyny played in the April 18-19 killings.

"There's definitely an element of male violence against women in this crime," she said. "Our main request is an independent public inquiry with a feminist analysis included."

MacDonald said if male violence against women were considered more seriously in the criminal justice system, it could avoid tragedies such as the one that occurred in Nova Scotia.

The more that comes out of

The more that comes out of this tragedy one theme seems to come through. The Criminal Justice System appears in the comments and in other cases in Canada particularly in Ontario. The RCMP will ultimately take a lot of criticism over the handling of prior complaints.

In assessing blame it seems to me that the time has come to look at the laws in place to control Police in there investigations. Perhaps its time to give police forces some support by strengthening the Criminal Code. Laws in this country handicap Police forces in the performance of investigations, normal police work and gun crime. Good opportunity for the Federal Government and Provincial Governments to step up make the changes necessary to help prevent these tragic acts in the future.

Unfortunately, in BC there

Unfortunately, in BC there are some influences in the Court System that seem to be a factor when trials do proceed - perhaps on less serious prosecutions at the outset. However, this may lead to a sense of 'lawlessness'.

The memory of Mayerthorpe, Alberta where four RCMP lost their lives is evoked when we speak of weapons and suspicious activity.