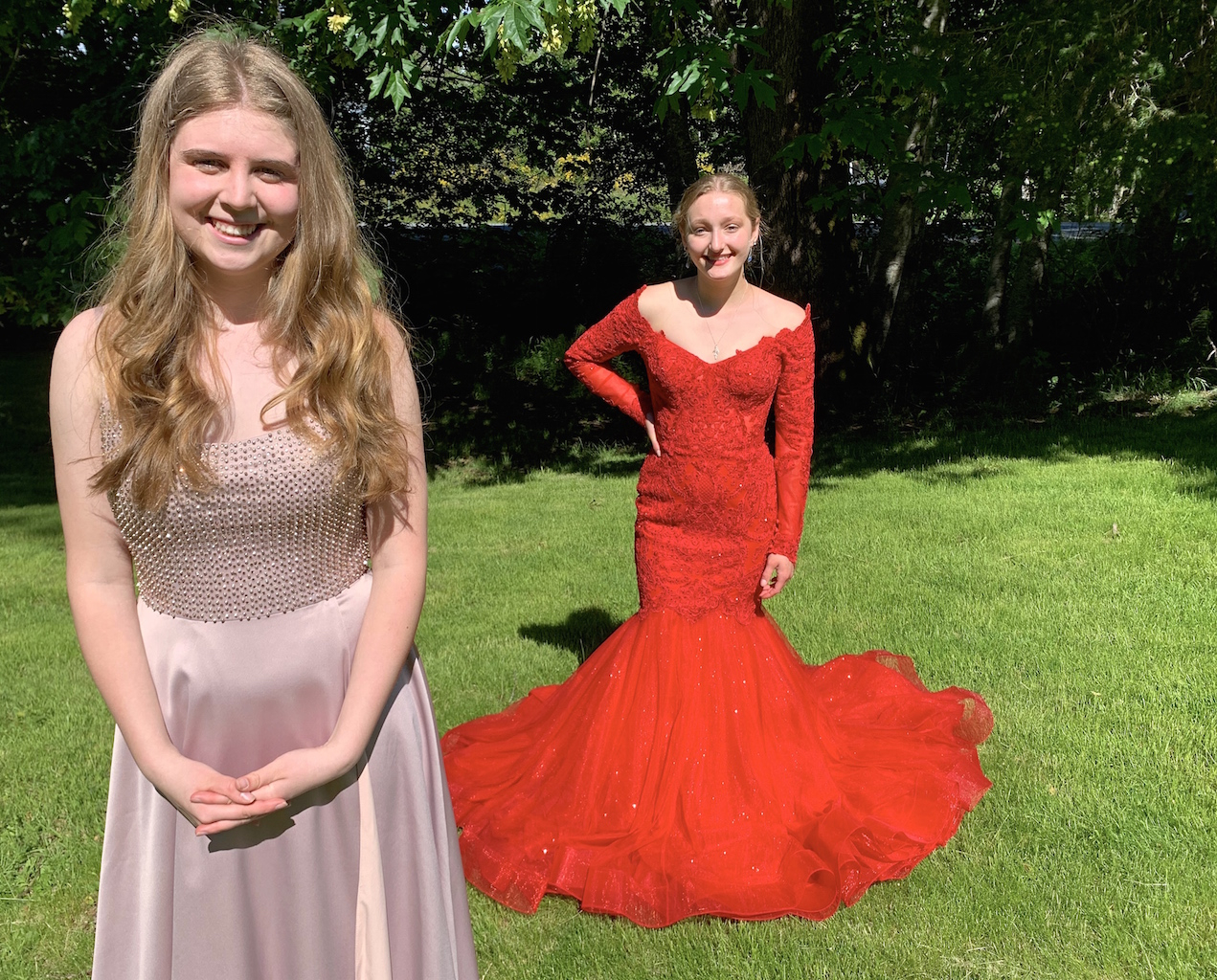 Childhood friends and Carihi Secondary grads Amelia Nimmon and Ruby Nickoloff were looking forward to the festivities of prom with their graduating class. But their celebrations are going to be much smaller this year due to COVID-19. Photo: Rochelle Baker
Previous story
Next story

Every June, the graduating classes of School District 72 gather on the ocean shoreline of Campbell River for a group portrait in their formal wear, just before prom.

Beforehand, couples or classmates do a fashion promenade along the park’s walkway, while friends, family, teachers and coaches snap photos of the students in their gowns and suits in the afternoon sun before they head off to their formal dinner.

But not this year.

In the COVID-19 era of physical distancing, the school district made official last week what students had been anticipating, and cancelled prom and its attendant group activities for the class of 2020.

Between Carihi Secondary, Timberline Secondary and Robron Centre, the district has approximately 420 students eligible for graduation this June.

Of all the social events connected to graduation, the foreshore photo was the one the student from Quadra Island was looking forward to most.

“It’s been a tradition for a long time. It’s very celebratory and everyone is super excited and dressed up,” Nimmon said. “I just wanted to go because I would get to see everyone in their dresses, and take pictures with teachers and friends.”

“It’s so you can get those memories that last … even though it sounds a bit cheesy.”

Instead, Nimmon and childhood friend Ruby Nickoloff are starting to brainstorm plans for a smaller, modified and socially distant prom with close friends and dates somewhere outdoors later in the summer.

“I had a very solid plan where I knew what’d I’d be doing for the next two years. But now, everything fell apart and I have no idea what's going to be happening,” Carihi Secondary School graduate Kailen Crosson about COVID-19's impact on her future.

“Sort of a backyard prom,” said Nickoloff. “Just because we’re not having a normal prom, doesn’t mean not having a prom at all.”

​​​Carihi grad Kailen Crosson, who is on the graduation committee, said Grade 12 students went into the March spring break unaware there wouldn’t be any opportunity as a group to say goodbye to one another.

Not only prom, but also some of the school’s larger traditional social events, such as the annual grad dodge ball tournament, planned after spring break, were also cancelled.

Plus other big projects students had invested time and money into were also nixed, such as the theatre department’s production of the musical Newsies, said Crosson, who was stage manager for the show.

“It’s really disappointing that prom and graduation aren’t going to happen as milestones like they are supposed to,” Crosson said.

“But honestly, for me, there are so many bigger things that are hanging in the balance right now.”

Crosson, also from Quadra Island, was slated to attend University of King's College in Halifax, N.S., and live in residence.

As well, she had work in a local resort lined up to help pay for tuition and living costs.

But the resort’s restaurant will likely scale back, due COVID-19’s hit on tourism, and only hire core staff this summer, Crosson said.

It’s also still not clear if she will be allowed to live in residence at her university, or if her classes are moving online, she added.

Nimmon, who was heading to the University of British Columbia in September, finds herself in similar circumstances around schooling and work.

As does Nickoloff, who was headed to the University of Victoria.

While Nickoloff expects to hear if UVic will allow students to live on campus next week, UBC informed Nimmon it will be pushing her classes online, and first-year students won’t be living on campus come September.

“I was looking forward to moving and living in Vancouver,” Nimmon said. “It was a wonderful opportunity to broaden my horizons and get off Quadra … nothing against Quadra.”

She plans to take her online classes while continuing to live with her family and look for work, but there’s little available locally at the moment, she said.

Quadra’s local graduates are facing the same pressures being felt by post-secondary students across Canada.

Many students are experiencing job loss or unemployment during the pandemic, according to a recent Statistics Canada survey.

A total of 49 per cent of the students participating in the survey said they’d lost a job prospect.

A full 92 per cent of the post-secondary students in the survey reported some or all of their courses were moved online.

All three of the Quadra graduates are applying for the federal government’s Canada Emergency Student Benefit (CESB), which opened for registration May 15.

Nickoloff said the application process and the eligibility guidelines were a bit vague, and she’s a bit anxious she’ll have to pay the funds back in the future.

“But I’m not as worried about the thought of paying them back, as much as I am about not getting it all,” Nickoloff said.

“I’ve always had a job before and it makes me nervous not having one.”

The CESB fund provides $1,250 a month to eligible students or new graduates, or $2,000 for students with dependents or disabilities, May through August for those who don’t qualify for the Canada Emergency Response Benefit (CERB).

All three Carihi grads said they are also still waiting to see how the district is going to roll out commencement ceremonies, as physical distancing rules ban gatherings of 50 people or more.

District 72 hopes to provide more details to Grade 12 graduates and their families before the end of next week, said Jennifer Patrick, the district’s communication officer in an email Tuesday.

Administrative teams at the district’s secondary schools are working collaboratively to create a meaningful, alternative way to mark commencement for the graduating class of 2020, Patrick said.

“Our schools are working to ensure that there is a cap and gown commencement where students have the opportunity to cross the stage and be given their diploma with personalized recognition of their achievements,” she said.

Commencement will be scheduled, even if in a modified form, at the end of June and will still feature some traditional elements of the ceremony.

In the meantime, the Quadra high school grads are working to adjust to the constant change and ambiguity the pandemic is inflicting on them during this transitional stage of their lives.

“It’s hard to process that for first time in my life, I don’t know what I’m going to be doing in the fall, or even next month in June,” Crosson said.

“I had a very solid plan where I knew what’d I’d be doing for the next two years. But now, everything fell apart and I have no idea what's going to be happening.”