By Morgan Sharp | Analysis, Business, Politics, Next Gen Insider | May 22nd 2020
#610 of 1611 articles from the Special Report: Coronavirus in Canada 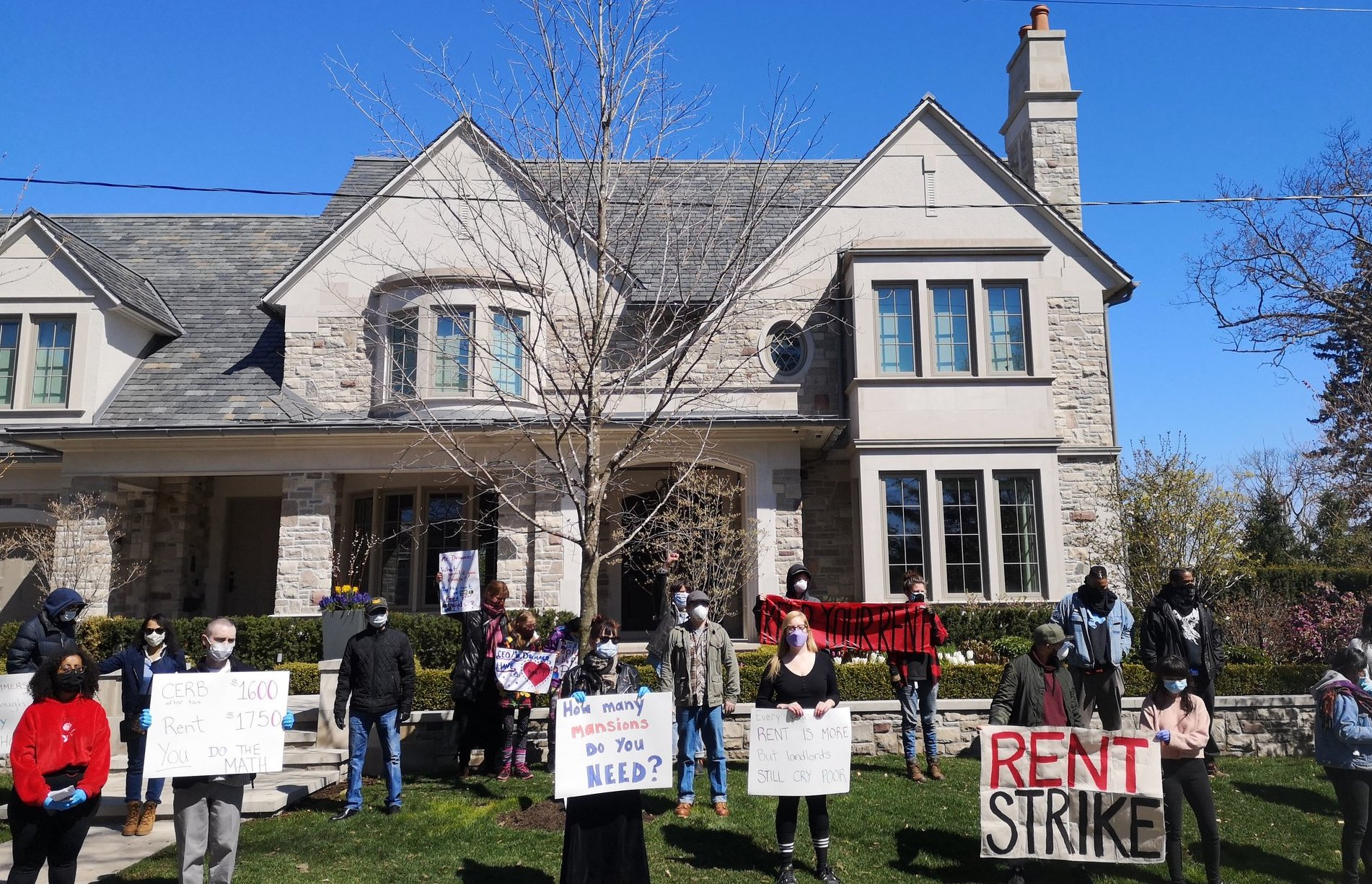 Tenants protest outside the house of a corporate landlord to seek rent forgiveness. Photo via Keep Your Rent Toronto
Previous story
Next story

Some landlords in Toronto whose tenants are struggling to make rent after losing their jobs due to COVID-19 are exerting undue pressure for payment, advocates say, including showing up at their residences with an eviction notice or a machine to take immediate payment.

For now, that’s about all they can do, since the Landlord and Tenant Board (LTB) that adjudicates on disputes between the parties has postponed eviction orders and proceedings, with only urgent matters being considered via telephone or in writing.

But with both tenant and landlord groups in Ontario bracing for even more renters to fall into arrears in May, tenant advocates are warning of a wave of evictions once the moratorium is lifted.

“It is going to be a terrifying bloodbath,” warns Geordie Dent, the executive director of the Federation of Metro Tenants' Associations.

He calculated that renters who fell into arrears in April may have created the justification for some 50,000 landlord applications to the board, compared to the roughly 4,000 it deals with in a typical month.

“Everyone seems to think May will be worse,” he added.

“We do expect May to be worse,” agreed Tony Irwin, the president of the Federation of Rental-Housing Providers of Ontario, noting that his member landlords had reported 10 per cent delinquency in April, a ten-fold increase from a typical one-per-cent rate.

“People may have gone through savings and had no employment income in April to help them pay May rent,” he said. “And so while they do get government support, we’re concerned that in places like Toronto, where rent is higher than other places, that the support that people are receiving may not be enough.”

The impact of the pandemic and related shutdowns are being felt particularly acutely by younger people, most of whom are renters and are often employed in precarious or part-time work.

“It is going to be a terrifying bloodbath,” Geordie Dent, executive director of the Federation of Metro Tenants' Associations on rent arrears.

“The rise of the gig economy, which is characterized by independent contractors and freelance workers, has always been problematic,” said Bahar Shadpour of the Advocacy Centre for Tenants Ontario. “The pandemic is exposing that vulnerability.”

She added that younger people are also more likely to be single, with single-person dwellings among the most unaffordable.

While monthly rental rates for a one-bedroom unit in Toronto did decline in May, the average asking price was still more than $2,100, according to data from rentals.ca.

That is more than the $2,000-a-month emergency payments the federal government has made available to people who have lost their jobs due to the pandemic.

Premier Doug Ford said in late April that he would ask the federal government to work with the province on a residential rent relief program, but none has so far been forthcoming.

Ottawa has, however, launched a rent relief program for small businesses and is encouraging commercial landlords to take part in it.

Irwin said that while the landlord group was focused on responding to the emergency for now, they are also eyeing the LTB’s eventual return.

“At some point down the road, we’re certainly going to be looking to the government to reopen the tribunal in some way,” he said, with landlords in the meantime typically arranging for unpaid rent to be repaid over three to 12 months.

Tenant advocates are meanwhile calling for measures to ensure the crisis does not lead to a wave of evictions, which would allow landlords to then charge new tenants even higher rents.

“In the absence of rent forgiveness and/or a prohibition against eviction on the basis of late rent during the months of the crisis, there will be mass evictions,” said Cole Webber, who works at Parkdale Community Legal Services.

Some 865,000 people across Canada have signed an online petition calling on the federal government to cancel residential rent and mortgage payments for the duration of the pandemic.

Melissa Jean-Baptiste, a staff lawyer at Kensington-Bellwoods Community Legal Services, said those falling into arrears are being threatened, but she is not seeing more legal filings.

“The filing costs $190, so if they (landlords) don’t think they will get a hearing anytime soon, they may be holding off,” she said, adding landlords are still pushing tenants on notices to vacate that were posted before the pandemic.

A spokesperson for Tribunals Ontario, which oversees provincial tribunals including the LTB, has not responded to queries National Observer first posed on May 8 about whether it had seen a spike in applications from landlords whose tenants had fallen behind since the pandemic.

Jean-Baptiste said some of her clients are paying $800 a month in rent-controlled housing that could bring in $2,500 in today’s market, and that she is advising them to pay whatever they can to put them in good stead if and when their landlord tries to move them out.

“There are some landlords that are licking their lips and hoping people fall into arrears,” she said. “If they can get them out, they don’t even have to go through the whole renoviction process,” she added, referring to a landlord’s argument that major renovations require a tenant to move out, at which point, they can reset the rental price.

Benjamin Ries of Downtown Legal Services said he has been hearing a lot of complaints about landlord entry at rental properties during the pandemic. While landlords have been advised not to do inspections or show properties now, he has had to tell worried tenants that if either side had provided notice to vacate prior to the pandemic, then regular provincial rules around access remain in place.

Likewise, with residential construction broadly excluded from shutdowns. Tenants have little recourse when landlords decide to continue with renovation and repair work, which would, in normal times, be done during business hours when most people are not in their residences.

“It’s a head-scratcher why that’s continued,” Ries said. “The government’s approach to keeping that going has made tenants prisoners.”

He said his clinic, which caters to both low-income renters and students, has heard from students being asked to pay rent for the rest of the school year or not getting their security deposit back even if the pandemic has forced them to move out or even leave the country, in the case of international students.

He’s been fielding a lot of questions about whether they can break their lease early or get a reduction in rent, he said, “and the answer is usually no.”

Ries also wondered about how the ongoing effects of the pandemic will change housing for the next school year, which is likely to largely be conducted online.

“If students find out they don’t have to rent in Toronto, what does that mean for those that have already signed leases?”