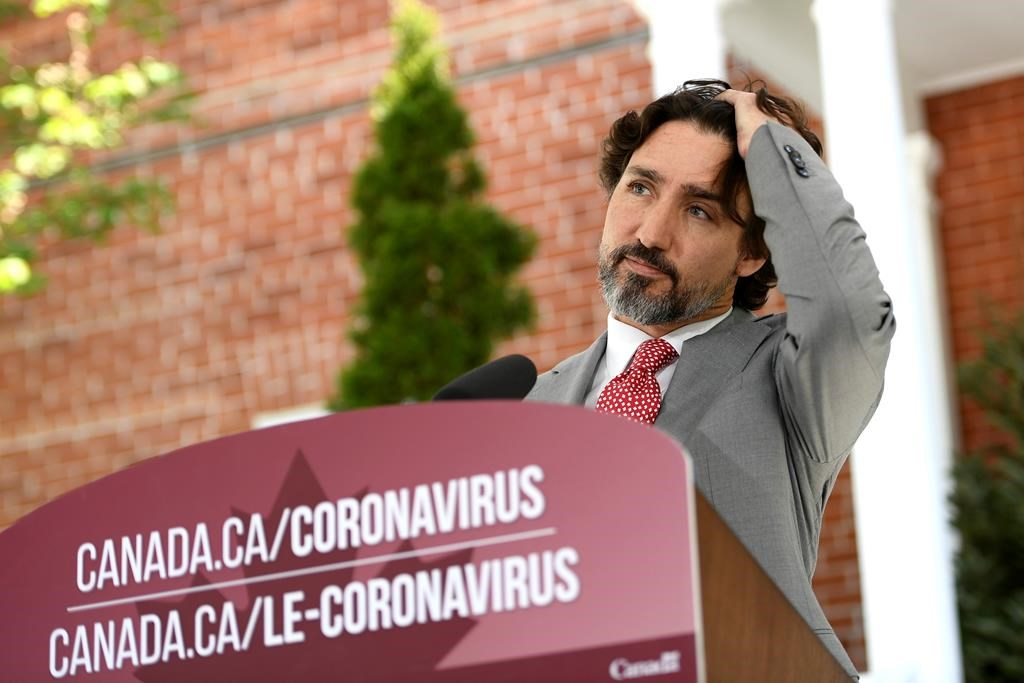 Prime Minister Justin Trudeau brushes his hair out of his eyes as he listens to a question during his daily news conference on the COVID-19 pandemic outside his residence at Rideau Cottage in Ottawa, on May 20, 2020. Photo by The Canadian Press
Previous story
Next story

Canada's commercial landlords got a request and a warning from Prime Minister Justin Trudeau to buy into rental assistance program launching next week, as part of a handful of moves in one day to get billions in federal aid to companies large and small.

The program opens for application on Monday, designed to provide forgivable loans to landlords that offer a 75-per-cent break on rent, with June payments due in a few days.

Business groups have warned of leery landlords unlikely to take part in the program, which is delivered jointly with provinces and territories.

A survey from the Canadian Federation of Independent Business on Wednesday suggested the program could make the difference between surviving or succumbing to the COVID-19 pandemic for half of small businesses. A similar number of small businesses were concerned about being unable to pay June's rent without further help.

"The closer we get to June 1, the more stressful things are getting and the more business failures we will see," Laura Jones, the organization's executive vice-president, said in a statement. "We're begging governments to move quickly to create additional help outside" of the rent relief program.

Speaking outside his Ottawa residence, Trudeau said further business closures through the pandemic could end up slowing an eventual economic recovery, rather than aiding in a rebound.

He said commercial landlords could find themselves out of cash in the future if they evict tenants now.

"With many people discovering that we can work from home ... there may be a lot of vacancies in commercial buildings over the coming months and years," Trudeau said.

"That's why making sure we're supporting the businesses we have now to be able to stay in their spaces as we slowly restore our economy is going to be important, and we certainly expect landlords to be part of the solution."

The Canada Mortgage and Housing Corp. is to release information on the program next week, with payments to landlords expected to arrive by June 1, the Commons finance committee was told Tuesday.

The budget for federal aid has hit $151.7 billion, with tens of billions more in loans to put a floor under the economy to help in a rebound. A top central banker said Wednesday that revival could "occur in fits and starts," the result of "repeated loosening and tightening of containment measures."

Timothy Lane, deputy governor of the Bank of Canada, said some sectors may bounce back quickly, and fuel broader changes in the economy that aids productivity. Other sectors, including travel and energy, may feel longer-lasting effects.

"It is also unclear how long it will take for jobs to return after containment measures are lifted. Many people have lost their jobs in the shutdown, and this is deeply concerning," he said in a speech, based on a text released by the bank.

Federal figures released Wednesday showed a benefit for hard-hit workers now has more than 8.1 million applicants who have received over $38.4 billion — pushing the Canada Emergency Response Benefit further beyond its $35-billion budget.

A $73-billion wage subsidy program designed to keep workers on company payrolls — and off the CERB — has now approved 215,661 claims, providing $5.7 billion in aid to companies to cover 75 per cent of wages for almost 2.8 million workers.

"Our best-case scenario, of course, is that we preserve firms, we preserve jobs and we get ourselves through this time and face up to what will be the next challenge."

More aid became available Wednesday for Canada's largest corporations as the government began accepting applications for a bridge financing program that will hand out loans starting at $60 million — with no upper limit — to companies with revenues of over $300 million.

Recipients will have to give the government the option to purchase shares in publicly traded companies worth 15 per cent of the loan, or provide a cash equivalent. Privately held companies will pay the same in fees. The government will also have the right to have observers on boards of directors.

The terms of the program are designed to ensure "that if the firm does well, that Canadians, and Canadian taxpayers, share in that upside," Morneau said in unveiling the details.

And the Liberals poured about $2 billion in additional child benefits to parents' pockets through a special top-up of the Canada Child Benefit. The payment, like the benefit itself, was to be income-tested.

This report by The Canadian Press was first published May 20, 2020.