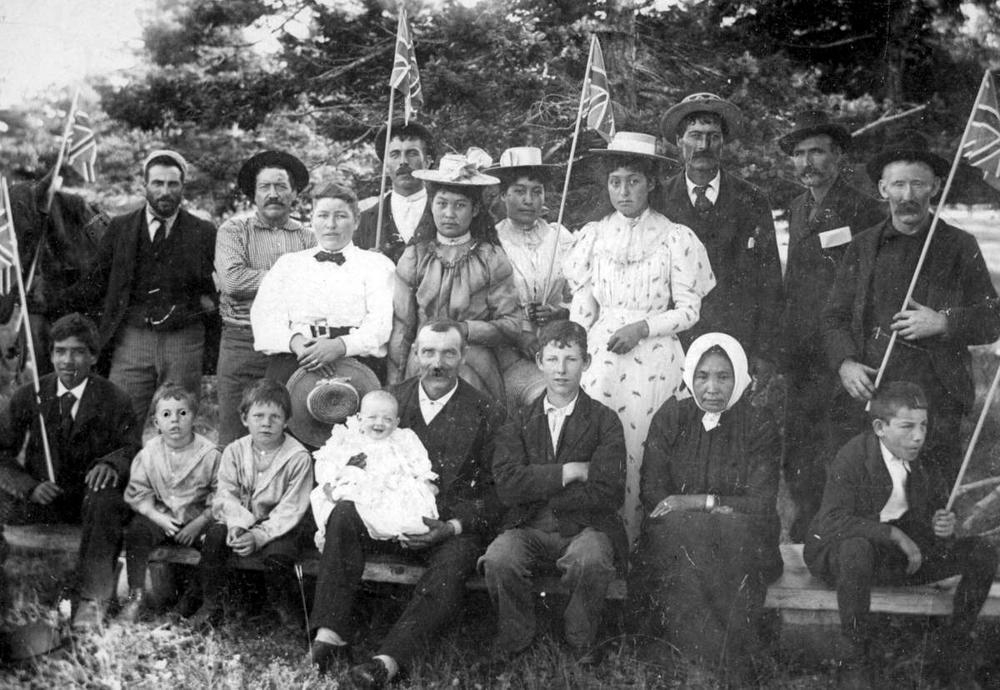 A photo of what is believed to be Quadra Island's first May Day picnic at Drew Harbour in 1897. Photo courtesy Heather van der Est and Campbell River Museum
Previous story
Next story

Quadra Island’s May Day is the community’s longest-standing annual celebration, boasting more than a century of tradition.

The popular island event has waxed, waned and evolved, subject to time and history, but perhaps never more so than this year.

This spring, the community gathering is undergoing a metamorphosis shaped by the COVID-19 crisis.

May Day typically involves a themed costume parade with children, families and community groups packed into cars and floats that snake along a gravel road flanked by spectators before arriving at Rebecca Spit Marine Provincial Park.

There, the crowd gathers on a field by the sea to listen to the May Day queen’s speech and watch the school kids dance around the May pole before participating in races, a greased-pig competition and a large community picnic.

But now, the event has to adhere to the pandemic’s physical-distancing protocols and adapt, said Rebecca Young, executive director of the Quadra Island Community Centre.

The May Day selection committee chose “metamorphosis” as the theme this year, as it seemed especially appropriate, Young said.

“We don’t know exactly how things are going to look in the world, but it’s about how we can change that uncertainty into something beautiful and positive.”

May Day has always been a community- and volunteer-driven event, Young said.

“The trimmings are different, but the recipe for the cake is still pretty much the same," Quadra Island historian Jeanette Taylor, commenting on the evolution of the island's historic annual May Day celebration over time and due to COVID-19.

“But it’s a bit weird this year, because it’s hard to gauge how involved people will be, given that we can’t join together, which is really what May Day is all about.”

Organizers are encouraging Quadra residents to celebrate May Day in place on Saturday, by dressing up, decorating homes and driveways or having picnics outside with their families.

Although the parade and crowd events fell victim to COVID-19, some longtime traditions are being preserved, Young said.

Maese Shea is nominated as the 2020 May Day queen along with princesses Fortune Dennison and Mariah Newell.

“It’s an important event to me, like a holiday,” Shea said.

“It brings family and friends together and people you might not see that much. … It’s a very special day, I feel.”

The selection committee of past May Day queens chose Shea on the strength of her submission to the speech competition.

This year, instead of publicly presenting speeches, contestants were asked to submit videos to be judged virtually.

In her speech, Shea noted that while May Day has transformed during its 123-year history, the community spirit remains.

Shea will spend May Day with family and friends in her quarantine bubble, but she’s looking forward to next year, when she can climb the stage at the event.

Heather van der Est has attended May Day for 50 years.

“I love it. ... It’s just part of Quadra’s history. I love watching the world’s shortest parade and the community involvement of it all,” van der Est said.

She remembers when the May Day queen was elected at grade school by ballot, and girls who wanted the role would pressure their classmates to vote for them.

When the community celebrated the event’s centennial in 1998, van der Est set out to identify and locate any past queens still alive and invite them to the event.

She successfully arranged the reunion of approximately 50 former queens, who ranged in age from 13 to their late 80s.

“It was a huge achievement,” van der Est said. “We had a reunion the day before May Day and many of the queens participated in the parade the next day.”

She accumulated so much information during the organizing process that she eventually compiled a book of archival data on May Day’s history, which is available at the public library and local museums.

Quadra’s May Day origins began with the celebration of Queen Victoria’s Diamond Jubilee in 1897.

Early celebrations saw pioneering families arrive by boat or horse for a picnic and games such as a greased-pig contest, Quadra historian and author Jeanette Taylor said.

The day would come to a close with those assembled singing “God Save the Queen.”

During the First World War, the English tradition of crowning a May Day queen was encouraged by authorities to fuel patriotic sentiment, Taylor said.

Over time, however, the focus became less about ties to the empire and more about community coming together again to celebrate the start of summer.

“Dances used to happen all the time on this island, and they were fantastic,” said Taylor, who remembers attending the parties into the ’80s.

“The May (Day) queen would come in a great parade and open the dance … and typically, dances went all night because it was too dark and too far away to get home.”

“We still had the dances when I was around, but they just got too wild and they eventually got nixed,” she said.

Family dances without alcohol were organized as an alternative, but eventually, the tradition faded away, she said.

The development of themes and costumes for May Day and the parade came about in the ’70s and ’80s, as younger islanders took over organizing the event from the older generations, Taylor said.

So rather than their Sunday best, islanders in the parade wear elaborate costumes based on themes such as “wild,” “love” or “Hollywood’s silver screen.”

But although May Day has evolved from its traditional origins, the core of the celebration remains unchanged, Taylor said.

It’s still celebrates community and the bonds of family, friends and neighbours, she said.

“The trimmings are different, but the recipe for the cake is still pretty much the same.”