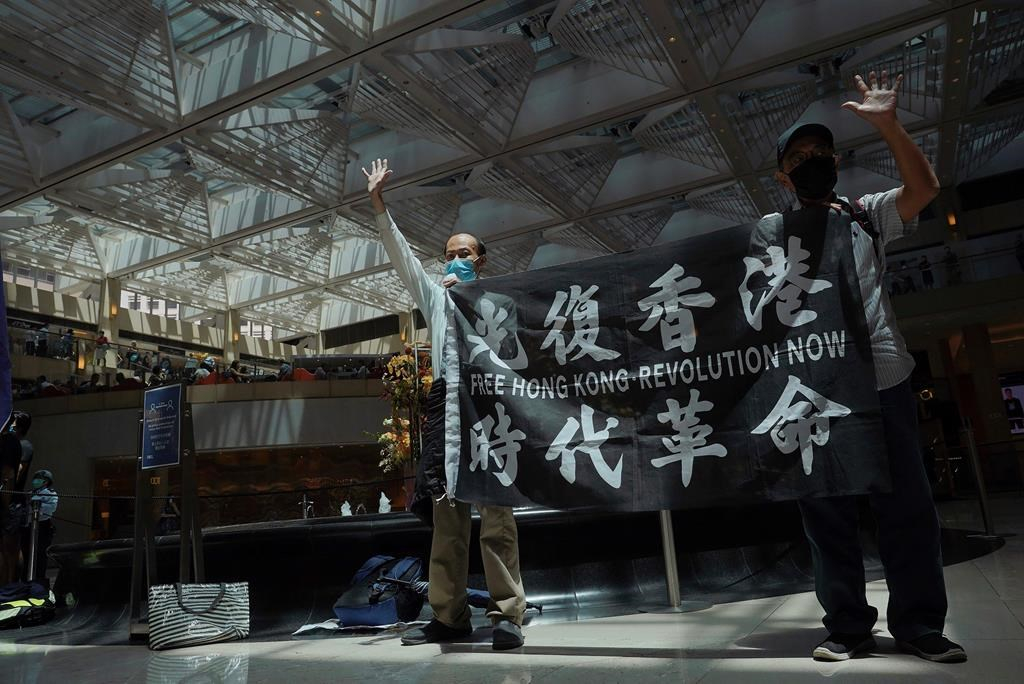 Protesters gesture with five fingers, signifying the "Five demands - not one less" in a shopping mall during a protest against China's national security legislation for the city, in Hong Kong, on June 1, 2020. Photo by The Associated Press/Vincent Yu
Previous story
Next story

A Canadian legal activist is warning the federal government to grant asylum to democracy activists in Hong Kong and expanded settlement to those with links to Canada before China prevents them from leaving.

The warning came Monday from Avvy Go, the director of the Chinese and Southeast Asian Legal Clinic, which has already helped bring Hong Kong pro-democracy activists to Canada.

There are 300,000 Canadians of Hong Kong descent in China, and Go says if Ottawa doesn't act now to accommodate those who want to leave, Beijing will prevent them from leaving in the future.

"The time to act is now. As China continues to crack down on the democracy movement in Hong Kong, it may soon find ways to prohibit Hong Kong activists from leaving that city, period," Go said Monday at a joint video press conference hosted by Amnesty International.

"Even with those who are Canadian citizens, China may refuse to recognize their dual citizenship status and deny their exit from Hong Kong."

MPs from the four major Canadian political parties and one independent senator stood in solidarity with the proposals Go put forward at a virtual press conference convened by Amnesty International.

Canada, along with the United States, Britain and Australia, have condemned Beijing's imposition of a new national security law that they say violates Hong Kong's freedom from Chinese communist interference.

"This is the Beijing government's most breathtaking, threatening and callous attack yet ... discarding any pretence of fulfilling China's international promises made when Hong Kong was handed over in 1997," said Alex Neve, the secretary general of Amnesty's Canadian branch.

Go called on the federal government to implement several immigration and asylum measures, to help people get out of Hong Kong before it is too late. They are:

—Expediting family sponsorship applications by Canadians with spouses and parents in Hong Kong.

Beijing could bar exit of dual Canadians from Hong Kong amid protests: lawyer

Last year, Hong Kong residents took to the streets in mass protests against a proposed extradition law from Beijing that was eventually abandoned.

During that unrest, Go's clinic received requests from Canadians of Hong Kong descent whose relatives participated in pro-democracy protests, she said.

Since Beijing announced the new security law, the clinic is getting calls from Canadians who are worried about their families even though they may not have been involved with the democracy movement, said Go.

"These are our people. And as parliamentarians dedicated to promoting and protecting democracy, we cannot stand by silently. I endorse all of the actions," said Independent Sen. Marilou McPhedran.

McPhedran said she has travelled across Africa and seen the effect of China's massive development spending, an influence-buying effort that many analysts say is a power play by Beijing's ruling communist party.

"The weaponization of economic support is something that we need to understand better as we look at what is happening in Hong Kong," said McPhedran.

"The violation of the Hong Kong Basic Law, which is the essence of what China is saying it is going to do, is in fact a precursor to threats to democracies in many other countries as well."

Conservative MP Kenny Chiu, who was born in Hong Kong, said the people of his homeland respect human rights and the rule of law, and they are prepared to commemorate Thursday's anniversary of the Tiananmen Square massacre that saw the Chinese army kill scores of pro-democracy student protesters in 1989.

"We're witnessing in Hong Kong basic dictatorship in disguise, exerting its power out of fear for these values," said Chiu.