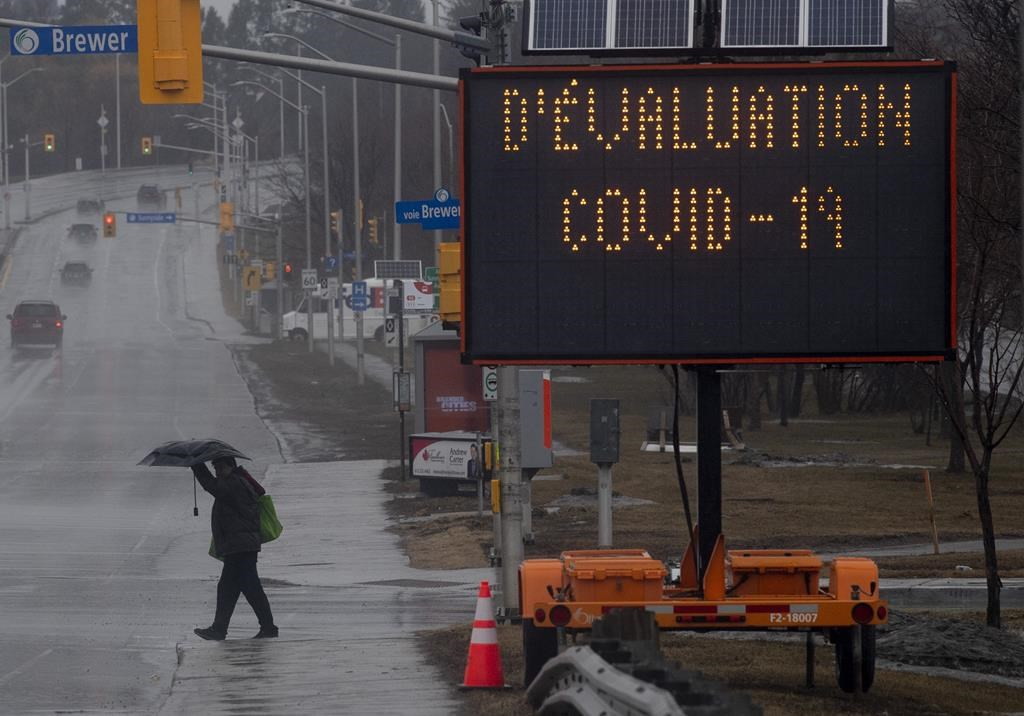 A person crosses the road during heavy rain near a Coronavirus evaluation centre in Ottawa on March 20, 2020. File photo by The Canadian Press/Adrian Wyld
Previous story
Next story

The rains soaked southern Alberta for days, unrelenting, saturating soil already sodden with melting snow — and before long Calgary was awash as rivers overflowed their banks.

The province described the 2013 flood as the worst in its history, but it might not be for long. Research from Environment Canada shows that climate change is behind more extreme rainfalls in Canada and suggests the problem is likely to get worse.

"If we continue with global warming, we will see continued increase in the frequency and severity of extreme precipitation," said Megan Kirchmeier-Young, co-author of a paper published Monday in the Proceedings of the National Academies of Sciences.

Researchers combined computer models and observed data for the most specific look yet at how climate change affects the kind of damaging rainfalls that turn streets to rivers.

The idea stems from simple physics. Because warm air holds more moisture than cool air, an atmosphere heated by climate change should hold more water and dump larger amounts of it.

Showing that, however, is more complex.

Previous research on extreme rainfall patterns hasn't been able to achieve a finer scale than the average of the entire Western Hemisphere. Now, scientists have been able to focus on regions within the United States and Canada — what's happening, why, and what's coming down the road.

They began with figures from a variety of locations for the maximum amount of rain falling over a one-day period and over a five-day period.

They did four separate calculations for the probability of those rainfall amounts occurring each year over a 50-year period from 1961 to 2010. Three were based on climate models that incorporated real-world data on increasing greenhouse gas levels, while the fourth was calculated directly from observed figures.

All four calculations showed increasing chances of extreme precipitation. The result from the observed data showed the highest increase, with chances of one-day heavy rainfall increasing by more than five per cent.

"We're finding (that) extreme precipitation increases in the models that have this human influence (greenhouse gases) agrees well with the increases we're seeing in the observations," Kirchmeier-Young said.

Such studies not only help scientists understand the past. Comparing modelled results with real-world measurements increases their ability to look ahead.

"If we have that, we can have more confidence in what the model is telling us what will happen in the future."

All three models in the study showed the chance of over-the-top rainfalls is expected to increase far into the future.

"If we continue with global warming, we will see continued increase in the frequency and severity of extreme precipitation," Kirchmeier-Young said.

The consequences are serious, she added. A one-day deluge can create significant flash floods in an urban area; five-day downpours can swell rivers over their banks — although river floods are complicated by more factors than just rainfall.

Urban planners, builders and regulators are all going to have to take Canada's coming climate into account.

This is a good article as far

This is a good article as far as it goes. One item we seem to miss as part of the climate change discussion is "How we build our cities, the amount of asphalt we put on the ground, effect of tall buildings on wind currents etc."
No question we as human beings contribute to the problem. It's time we take all pieces of the puzzle under consideration when discussing correcting Climate Change problems, not just fossil fuels.
Take a trip in a private jet and fly into a major city like Chicago, you feel the air currents effect passing over asphalted areas, heat it gives off causes the aircraft to rise, once passed to drops again. My point is the buildings we build, pave roads we travel on contribute to changes we see in our climate.

Well, the amount of asphalt

Well, the amount of asphalt is directly correlated with the number of cars that drive on it. Older inner cities where the zoning bylaws predate the car have narrower roads and often smaller residential lots with no provision for on-site parking, and the public road network tallies up to about 30% of a city's land area. And that's in denser neighbourhoods with more residential, office and institutional development, and where walking, biking and taking transit to work or school is common. Inner city dwellers effectively subsidize road and other public urban network systems delivered to the distant suburbs.

Suburbs and exurbs come in at 40-45% of their area devoted to road allowances and asphalt. That is especially true when you factor in triple garages and paved over driveways. Traffic engineers like the "higher" road standards of suburbia, which in fact are deleterious to a city's finances (suburbanites do not pay for all the services they consume, which are delivered longer distances to serve fewer people), human health (suburbanites walk less; childhood asthma increases with proximity to arterials), and the planet's atmosphere.

The suburban standard hasn't changed to this day. That is something that needs to be addressed, and the best way would be to gently urbanize the sprawling suburbs.

All brought to you by

All brought to you by deforestation: clearcut logging, pit mining, urban spread ...

More rain, warmer weather. Higher CO2. Sounds like better crops on the prairies to me.
Also sounds like it took quite a bit of manipulation of information to find that right combination to show a possible slight increase.
Sooner or later you will always get flooded when you build on the flood plain.

In general, dry areas are

In general, dry areas are projected to get drier; wet areas will get wetter. More frequent/prolonged/intense drought and more extreme heat days.
On the other side of the coin, more rain will fall in extreme weather events (heavy downpours), leading to flooding and increased run-off.
Run-off quickly drains water away without any benefit for crops. Much of this sudden volume of water overwhelms storage and soil absorption capacity, meaning that excess water is not captured.
Instead of soaking slowly into the ground and vegetation and replenishing groundwater, storm water runs off into streams, now flowing at higher volume. Less water availability for the ecosystem overall.