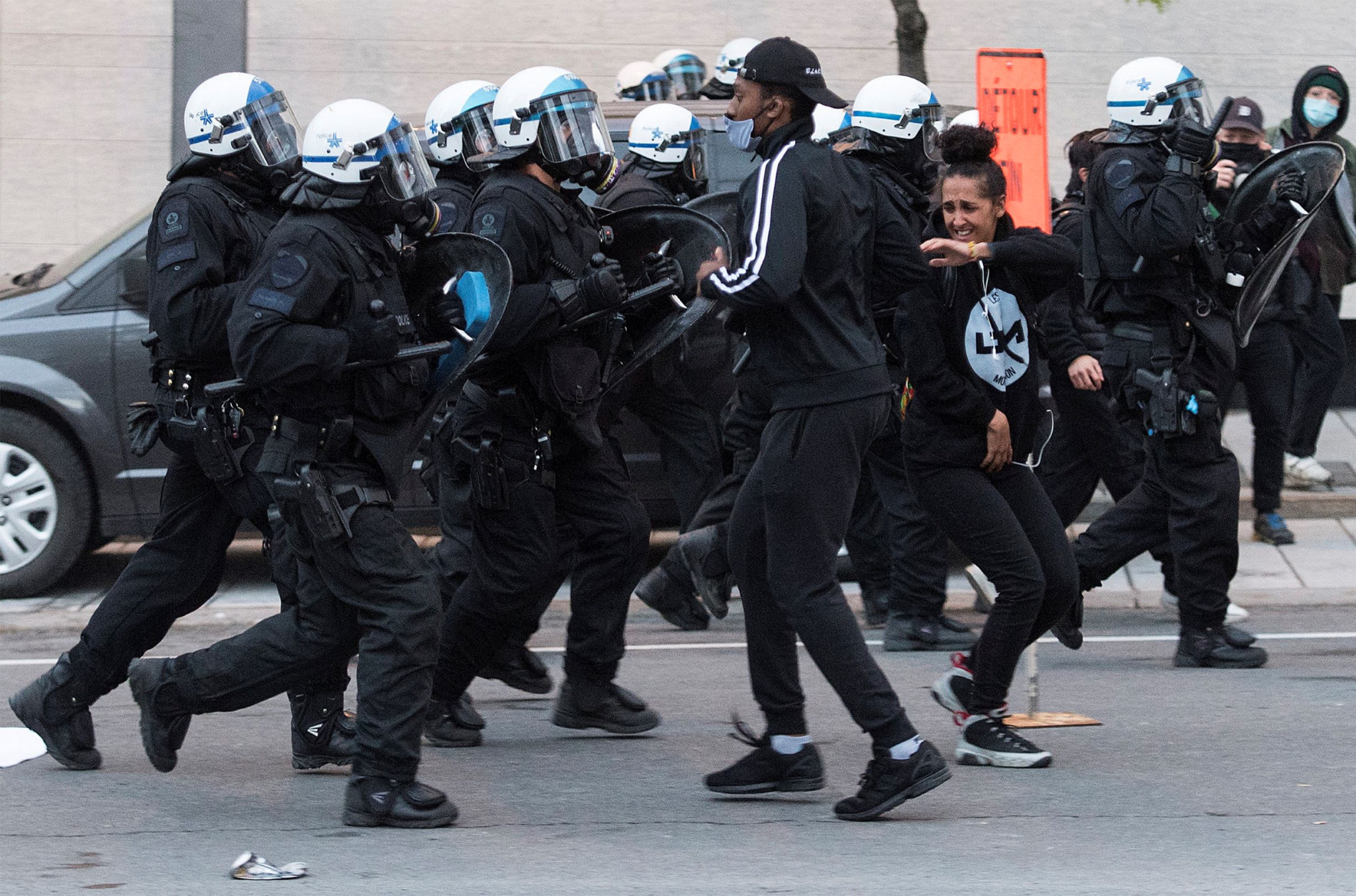 Police push back protesters during a demonstration calling for justice in the death of George Floyd and victims of police brutality. Montreal, May 31, 2020. The Canadian Press / Graham Hughes
Previous story
Next story

In a grainy cellphone video, you can see four Service de police de la Ville de Montréal (SPVM) officers standing around a man. There’s yelling. You can hear a Taser and the sound of gunshots. The officers move toward the man in the red sweatshirt and one hits him twice with a baton.

The man, 58-year-old Pierre Coriolan, was having a mental health crisis when officers killed him. The incident happened on June 27, 2017, and was another in a string of deadly encounters between Black men and police: in 2016, Montreal police killed Bony Jean-Pierre in Montreal-North and in 2018, Montreal police killed Nicholas Gibbs, a 23-year-old father of three young children.

On March 12, 2020, Montreal police responded to a domestic violence call in the Hochelaga neighbourhood and shot and killed a 54-year-old man. His name and other identifying information has not been released.

Activists have been organizing around police brutality in Montreal for years, so when rallies were called across Canada to protest police brutality and anti-Black racism, it wasn’t a surprise that Montreal’s was the largest and loudest.

Organizers say that between 10,000 and 15,000 people took to the streets on Sunday, calling for racial justice and an end to police brutality.

Rally co-organizer Vincent Mousseau said that there was a moment created by the protests held across the U.S. demanding justice for George Floyd, Breonna Taylor and so many others who have died at the hands of police.

“A lot of people are galvanized and politicized through what happens in the U.S. … I’ve noticed that Quebec society is more connected to the United States than they are to what happens in English Canada … But for us as organizers, we thought it was integral to talk about what’s happening in Canada,” they said.

The Montreal organizers ensured that their rally responded to local incidents of police violence, and not just where an incident was captured on camera. Mousseau said that it was important for Nakuset, the executive director of the Native Women's Shelter of Montreal, to start the event by highlighting the May 7 arrest of a Cree woman who was having a mental health crisis. Police arrived with a K-9 unit to respond and witnesses told APTN that they counted 17 police officers present for the arrest.

Mousseau, an anti-racist and anti-oppressive social worker said that the organizers were surprised by how big the turnout was. They tried to have enough masks and hand sanitizer to diminish the spread of COVID-19, but said that the numbers outpaced any rally against police racism and brutality they had ever seen in Montreal.

“A lot of people are galvanized and politicized through what happens in the U.S. … I’ve noticed that Quebec society is more connected to the United States than they are to what happens in English Canada."

After three hours, the Montreal police declared the rally illegal. Police sprayed the protesters who remained with pepper spray and rubber bullets, and some people smashed storefront windows. Videos taken from the clash show protesters running away from tear gas.

Montreal police’s reputation for racial profiling is well-known, and the rally gave thousands of people a moment to express their frustration and desire for change.

A 2019 report into racial profiling and the Montreal police showed that while crime had been relatively stable from 2014 to 2017, police interventions rose by 143 per cent. But that increase wasn’t experienced evenly — Arabs, especially Arab youth, Black people and Indigenous people were far more likely to be stopped by Montreal police than were white people. For example, the report found that Indigenous women are 11 times more likely than white women to be stopped by police.

Cases of their own

Emilie Nicolas, activist and columnist for Le Devoir, says that Montrealers don’t need to have images from the United States to spurn them to action; there are more than enough examples in Montreal for people to be angry over. Like Coriolan, Gibbs’ death was also caught on camera.

Before there was Black Lives Matter, Nicolas says that there was Montreal activism, driven by outrage over the murder of teenager Fredy Villanueva. He was killed by Montreal police in Montreal North in 2008 and two of his friends were shot and injured. Movements grew to demand justice for Villanueva, like Montréal-Nord Républik’s social forum and Hoodstock, a music and arts festival.

Activists say Montreal-North is over policed, and one of the consistent demands from local activists is that the SPVM reduce the number of officers who patrol there. Nicolas says that the best indicator of where Montreal police are likely to be present isn’t based on criminality, but instead on where the highest populations of racialized Montrealers live.

Montreal-North is also the location of one of the worst COVID-19 outbreaks in Canada.

The day following the rally, Premier François Legault again told reporters there’s no such thing as systemic discrimination in Quebec.

Nicolas and Mousseau both argue that at the heart of the problem is Quebec politicians’ refusal to contend seriously with systemic racism. From the police, through to the city and the province, people who hold positions of power have resisted calls to actually address how racism impacts racialized people, especially as seen in the city’s police force.

“There’s been so many reports, so many back-and-forths, so many promises made by the SPVM saying “we’ll look into the situation,” coming up with empty platitudes … with very little change,” Nicolas said.

“There are plenty of reasons to be frustrated with what’s going on in Quebec as well.”

Let's face it. "Racism" is endemic to the human condition. The human "lizard" brain is genetically primed to respond with the fight or flight response in times of crisis or existential fear. If one is susceptible to this instinct one leads a life of constant anxiety, whether or not it is objectively justified.

Both police and their victims are now conditioned to this state of affairs. Police pick the easy targets for a an "easy" win. The justice system is grinding through the "easy" targets and disposing of them in the most cost effective way. This is the business model of the justice industry.

The layers of society rarely impacted by this mechanism generally accept its operation and have no reason to quarrel with it.