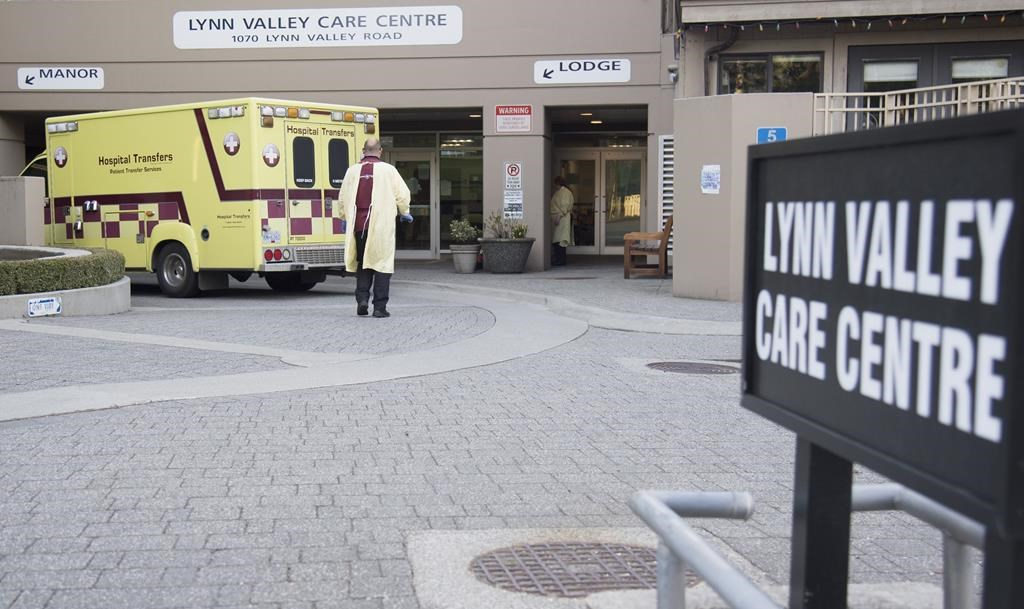 Care aides at the Lynn Valley Care Centre are looking to unionize in the wake of a deadly COVID-19 outbreak at the North Vancouver facility, signalling workers’ appetites for better working conditions and compensation in the beleaguered sector.

The home suffered Canada’s first COVID-related fatality in March, with 20 residents eventually dying of the disease and more than 50 residents and two dozen staff infected before the outbreak was declared over in May.

The Hospital Employees’ Union, which represents more than 15,000 care aides, submitted an application to represent workers at the facility to the Labour Relations Board early this week.

A majority of staff had signed union cards, the HEU said in a news release, and a mail-in vote among 120 staff members will be administered by the board this week.

“In the face of this unfolding tragedy, and despite the risks they faced, these workers showed courage, and a deep commitment to the care of their elderly residents at Lynn Valley,” HEU secretary-business manager Jennifer Whiteside said in the release.

“Now they are uniting together with HEU to advocate for safer working and caring conditions, and fair treatment from their employer.”

The HEU represents staff at nine other facilities in B.C. operated by Pro Vita, the contractor that provides staff to privately-owned Lynn Valley. It represented workers at Lynn Valley until 2007.

BC Liberal government changes in 2003 ending protection for employees when care home owners changed contractors led to contract-flipping and decreased unionization in the sector.

In 2001, the BC Liberal government introduced legislation allowing a number of long-term care operators to opt out of the existing master collective agreement.

The result today is contract “fragmentation,” said Whiteside, and disparate provisions across more than 80 separate agreements negotiated by HEU since 2001.

Care aides at the Lynn Valley Care Centre are looking to unionize in the wake of a deadly COVID-19 outbreak at the North Vancouver facility, signalling workers’ appetites for better working conditions and compensation in the beleaguered sector.

The move towards unionization comes on the heels of a pandemic that has revealed serious problems in the province’s long-term care system and left staff and residents vulnerable to the virus.

Bethany Hastie, a labour expert and assistant professor at the Peter A. Allard School of Law at the University of British Columbia, said the pandemic could bring a new wave of union organizing.

“It’s really shone a light on the kinds of essential work that we maybe didn’t think of as essential,” Hastie said.

“In that particular industry, that privatization seemed to be followed by a depression in wages and in benefits… and these people are taking care of the most vulnerable people in our society.”

The vast majority of B.C.’s 164 virus-related deaths have been residents of long-term care, as have around 80 per cent of deaths across Canada.

These deaths include one care aide in his 40s, who worked in two facilities to support his family and died after contracting the virus at work.

Early in the pandemic, provincial health officer Dr. Bonnie Henry took over staffing at long-term care facilities across the province, offering some workers wage boosts and ensuring that each staff member only worked at one facility to limit potential transmission.

Many care aides had worked across facilities to get enough hours to make ends meet, and about two-thirds of aides in private facilities don’t make as much as those covered by the Provincial Master Agreement.

Changes to the provincial labour code in 2019 now prohibit contract-flipping and the province has promised a comprehensive review and reform of the sector after the pandemic subsides.

Hastie says these changes mean Lynn Valley could be the beginning of a wave of unionization among B.C. care workers.

The memory of the benefits of unionization is strong among staff, Hastie said, as is knowledge of how to organize.

“This is perhaps an important moment for workers to seek to make gains to allow them to have decent working conditions and wages because of unionization,” she said. “We’re seeing a revitalization in labour organizing.”