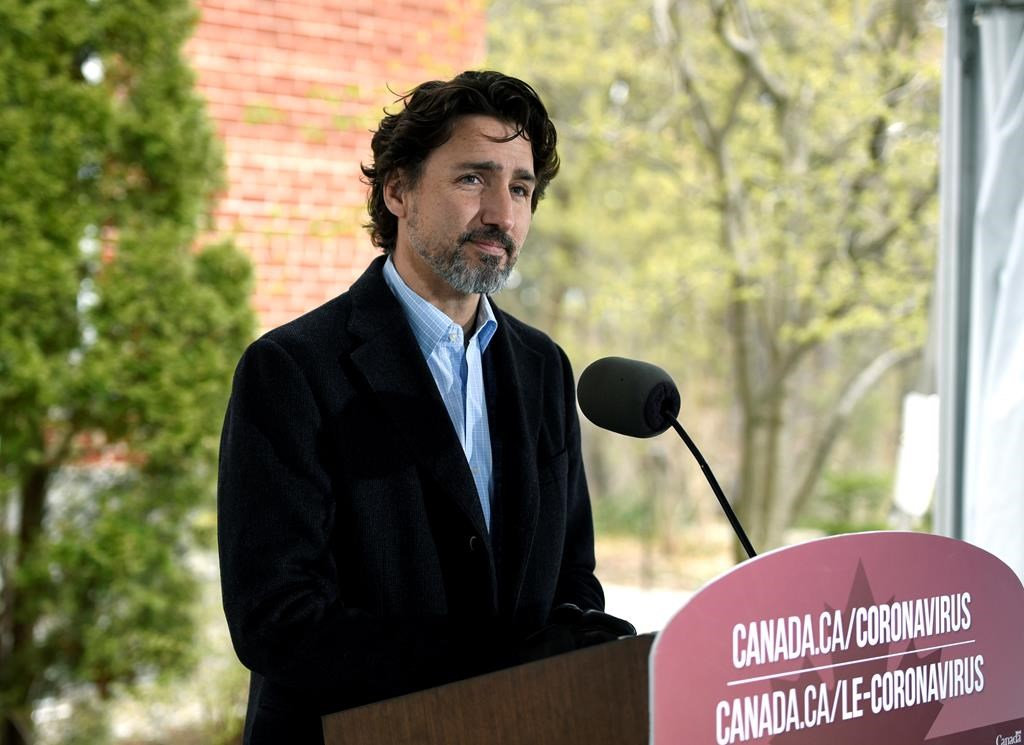 Prime Minister Justin Trudeau listens to a reporter's question during his daily news conference on the COVID-19 pandemic outside his residence at Rideau Cottage in Ottawa, on Saturday, May 9, 2020. Photo by The Canadian Press/Justin Tang
Previous story

Federal officials stressed the dangers to long-term care residents and Indigenous communities if COVID-19 restrictions are lifted too quickly after projections in Quebec painted a dire picture of the potential cost.

Prime Minister Justin Trudeau said Saturday he is "very worried" about residents of Montreal — the epicentre of the COVID-19 pandemic in Canada — where the province is preparing to loosen confinement measures despite a rash of fatal outbreaks at nursing homes.

"We must make sure that we are ensuring protection of our older citizens as an absolute priority," Trudeau told reporters.

"I understand the economic pressures we're all under and I understand people do want to go outside. But we need to do it in ways that we are sure are going to keep people safe, because the last thing that people want is a few weeks from now (is) being told, 'OK, we loosened the rules and now COVID's spreading again and you're all going to have go inside for the rest of the summer.'"

The comments came less than 24 hours after Quebec's public health institute said deaths could soar to 150 a day in the greater Montreal area if physical distancing measures are lifted. New cases could mushroom to 10,000 by June amid a potential surge in hospitalizations.

Premier Francois Legault said this week that elementary schools, daycares and retail stores with outdoor entrances in Montreal can reopen May 25 — the second time he has pushed back the date, but ahead of other large cities.

Long-term care residents account for more than 80 per cent of deaths caused by the virus across Canada despite making up only one in five cases, chief public health officer Dr. Theresa Tam said Saturday.

Stricter measures "may have to be reinstated" if controls ease up too soon, she said, calling the impact on seniors "a national tragedy."

"The virus has not disappeared from the face of the Earth," Tam said.

Questions about access to supplies are emerging among other vulnerable populations as health officials and community leaders work to contain the spread of COVID-19 in Saskatchewan's far north.

The region has seen a spike in cases in and around the remote Dene village of La Loche, a community of 2,800 about 600 kilometres northwest of Saskatoon where an outbreak has affected more than 100 residents.

Leonard Montgrand, the regional representative of Metis Nation-Saskatchewan, said Friday the situation is getting scary because infrastructure isn't set up to respond to the crisis.

Indigenous Services Minister Marc Miller said outbreaks of COVID-19 in First Nations communities may have been delayed because of their remoteness, but the government needs to remain vigilant in the future.

"You could see languages disappear," he said, referring to elders who make up the last generation to speak some Indigenous dialects.

Miller cited a need for more resources and better data collection to help protect the communities and understand the spread of the virus among Indigenous people, and called on provincial governments to help in that area.

The full scope of the outbreak among Indigenous populations remains unknown because federal data collection is carried out mainly among on-reserve and northern communities, he said.

"Rather than listening to the community and respecting their request to retrofit their youth centre into a temporary quarantine space, your department decided to impose an outside solution that was unwanted, unneeded, dangerous and simply wrong," Ashton said in a public letter Friday.

Canada's case count climbed past 67,000 on Saturday. Quebecers make up more than half of the total cases, with 36,986 — about half of which are in Montreal.

On top of sustained community transmission in pockets of the city, long-term care homes have come under such strain that 1,350 Canadian Forces soldiers will be deployed to 25 facilities by mid-May to help residents, the federal government says.

"They're dying in indignity in vast numbers. And that will continue if there are measures that are relaxed too soon. That is the scientific conclusion," Miller said.

The news Saturday was a bit better in Ontario, where Premier Doug Ford announced provincial parks will reopen Monday after one of the lowest daily case counts in recent weeks — 346 new confirmed cases for a total of 19,944, including 1,599 deaths.

Meanwhile, Trudeau said Canada will not pay the full price for medical masks that do not meet medical standards.

On Friday, the federal government suspended shipments of N95 respirators from a Montreal-based supplier after about eight million of the masks made in China failed to meet specifications.

"There are ongoing discussions ongoing with them about whether there are alternative uses for these masks, but we will not be paying for masks that do not hit the standards that we expect to give to our front-line workers," he said.

Trudeau said the discovery speaks to the "rigorous verification system" administered by the Public Health Agency of Canada.

Trudeau declined to specify on Saturday the per-unit cost of N95 masks, which federal officials have previously pegged at anywhere from $1.20 to $6 apiece.

Last month the Public Health Agency of Canada announced the government had bought around one million faulty KN95 respirators from a China-based supplier, which Ottawa said has pledged to replace them.

This report by The Canadian Press was first published May 9, 2020.

—With files from Stephanie Taylor and Teresa Wright