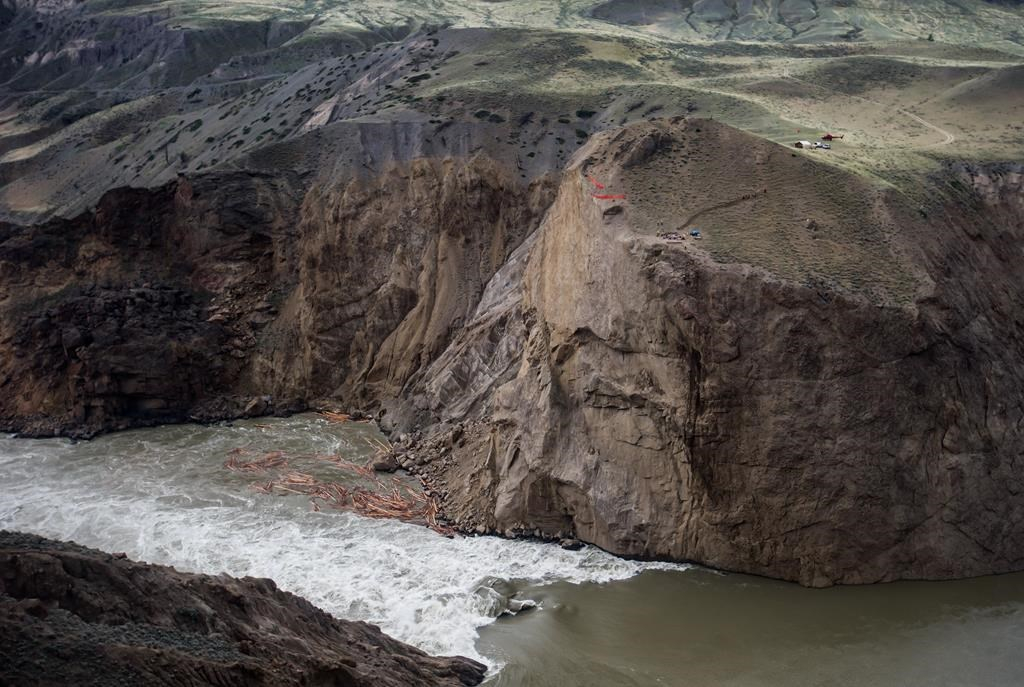 Workers are seen on the cliff at the site of a massive rock slide on the Fraser River near Big Bar, west of Clinton, B.C., on Wednesday, July 24, 2019. File photo by The Canadian Press/Darryl Dyck
Previous story

Early runs of Stuart sockeye and chinook salmon were devastated last year because they couldn't make it past a massive landslide on British Columbia's Fraser River, government officials said Tuesday.

Rebecca Reid, the department's regional director for the Pacific region, said salmon survival improved later in the summer when work started to transport fish past the slide, helping them reach their spawning grounds.

Mortality during the salmon's long journey inland is already high and it's hard to say what exactly causes their deaths, Eric Taylor, a zoology professor and fish expert at the University of British Columbia, said in an interview.

But he said it's clear that the landslide near Big Bar is the culprit behind last year's elevated mortality rate.

It's believed the massive landslide north of Lillooet occurred in late October or early November 2018, but it wasn't discovered until last June after fish had already begun arriving.

Fisheries Minister Bernadette Jordan told the committee the volume of the slide was equivalent to a building 33 storeys high by 17 storeys wide.

About 60,000 fish were helped over the slide last year, she said, while 220,000 made it past on their own once water volume dropped.

Jordan said so far just two chinook have been observed arriving this year.

Plans are in place to significantly increase the number of fish that survive and reach spawning grounds this year including using a pneumatic fish pump — a so-called salmon cannon — and building a series of boulders to create a fish ladder.

"The ultimate goal would be to clear it enough so that it's a natural passageway for the fish, so that it's not something that we have to continually monitor or maintain," Jordan said.

Early runs of Stuart sockeye and chinook salmon were devastated last year because they couldn't make it past a massive landslide on British Columbia's Fraser River, government officials said on Tuesday, June 9, 2020.

"But in the meantime, we are making sure that there are measures in place to get the fish through."

Jordan said another small slide of about two cubic metres happened last month while no workers were present, an indication of the dangerous terrain at the remote site.

The committee heard that Fisheries and Oceans is also exploring how hatcheries could be used to restore runs affected by the landslide. That means some salmon would be captured and their offspring reared before being reintroduced into the wild.

"We know that there's going to be a poor state for many of the upper Fraser River salmon, so we're looking at emergency conservation enhancement measures, including the hatchery component," said Jordan.

A holding facility went into operation last week, she said, although she acknowledged concerns that large-scale use of hatcheries could affect the genetic diversity of wild salmon stocks.

The fund is worth up to $142.85 million over five years until the end of March 2024, and Reid said the total value of applications under the program has so far been $340 million.

"One thing that there is consensus on, with Indigenous communities, local governments, recreation fishers, commercial, is that we need more money (for) restoration and habitat protection."

Johns said there are thousands of volunteers who want to help, but they need resources. Mobilizing such a workforce could be part of B.C.'s COVID-19 pandemic recovery plans while helping to save an iconic coastal species, he added.

The Big Bar landslide is the latest threat to the survival of wild salmon, said Taylor, along with climate change, lost habitat and the poor monitoring of bycatch by different fisheries.

"Big Bar is just one of the most recent incidents that are harming Pacific salmon that are already in a vulnerable position."

The landslide show the importance of implementing other measures to restore wild salmon runs to ensure their long-term survival, said Taylor.

"The failure to list Pacific salmon under the Species at Risk Act now has even more seriousness because we can't control these things like rock slides."

This report by The Canadian Press was first published June 9, 2020.

I was surprised to read at

I was surprised to read at the end of this article that salmon are not listed under Canada's Species at Risk Act. Why not? This is shocking.